The El Capitan
The El Capitan was a streamlined passenger train operated by the Atchison, Topeka and Santa Fe Railway ("Santa Fe") between Chicago, Illinois, and Los Angeles, California. It operated from 1938 to 1971; Amtrak retained the name until 1973. The El Capitan was the only all-coach or "chair car" (non-Pullman sleeper) to operate on the Santa Fe main line between Chicago and Los Angeles on the same fast schedule as the railroad's premier all-Pullman Super Chief. It was also the first train to receive the pioneering Hi-Level equipment with which it would become synonymous.

Originally conceived as the Economy Chief, the name El Capitan was chosen to commemorate the Spanish conquistadors; it competed for passenger traffic with Union Pacific's Challenger. Unique in charging an extra-fare despite being a coach train, it pioneered such features as "RideMaster" seats optimized for sleeping.

On its inaugural run the El Capitan left the main line at Williams and traveled up the Grand Canyon Railway to Grand Canyon Depot. In regular operation passengers bound for the Grand Canyon would connect at Williams.[2]In its first year and a half the El Capitan ran at 80% capacity, superior to similar services. Reservations had to be made weeks in advance. In 1942 the consist expanded to 12 cars. On September 29, 1946 the El Capitan began running every other day, departing Los Angeles and Chicago on odd-numbered days (except the 31st). Together with the Super Chief on even-numbered days, the two trains formed what the Santa Fe billed as "the first and only daily 39-3/4 hour service between Chicago and California." In 1948 the Santa Fe received additional equipment which permitted the Super Chief and El Capitan to start operating daily; the new schedules went into effect on February 29. The extra-fare charges were dropped from both El Capitan and the Chief on December 14, 1953.

A postcard photo of the Santa Fe's "El Capitan" passing through Shoemaker Canyon, New Mexico with Hi-Level equipment, circa 1950's. 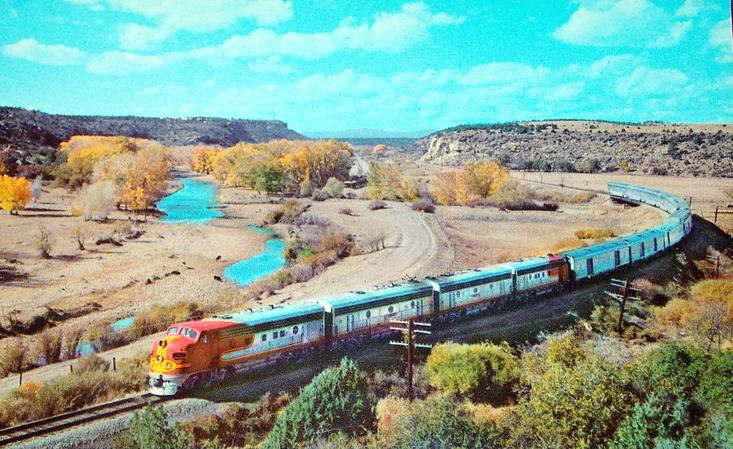 The El Capitan was one of the first Santa Fe trains to use the Budd-built "Big Dome"-Lounge cars, though these were soon given to the Chief in favor of new double-decker "Hi-Level" chair cars (coaches) developed by Budd and the railroad in 1954–1956. These experimental cars had a quieter ride, increased seating capacities, and better views.

The El Capitan debuted in February 1938 with two all-lightweight consists manufactured by the Budd Company. Each included a baggage-dormitory-coach, two coaches, a lunch counter-dining car, and coach-observation car. The baggage-dormitory-coach had a small baggage area forward, followed by bunks for the train's crew and 32 coach seats. Both coaches seated 52 and featured men's and women's restrooms at opposite ends. In the observation car the restrooms were located forward, followed by 50 coach seats. During periods of high demand additional cars were added from the Scout's pool.

Between 1946–1948 the Santa Fe increased the length of the El Capitan and added new cars built during and after World War II. The new El Capitan included a storage mail car, baggage-dormitory, eight 44-seat "leg-rest" coaches, two lunch counter-dining cars, a club-lounge, and a coach-observation car. Most of the coaches were built by Pullman-Standard.

Between 1954 and 1956 the El Capitan's consist included the "Big Dome"-Lounge that replaced the mid-train club-lounge car. On July 15, 1956 the new, "Hi-Level" streamliner consist debuted. Santa Fe purchased enough "Hi-Level" equipment for five nine-car consists. Six of the railroad's older baggage-dormitory cars had a cosmetic fairing applied to the rear roofline to create the distinctive "transition" cars and maintain a streamlined appearance on El Capitan. The real transition cars were the 68-seat step down chair cars, which had a regular-height diaphragm at one end and a high-level at the other. The dining cars rode on six-wheel trucks due to their massive weight (all other cars rode on four-wheel trucks). The "Big Domes" were transferred to the Chief pool. As on many "named" long haul trains of the era, a lighted "Drumhead" sign was on the rear of the observation car. These signs included "El Capitan" in a distinctive logotype with the railroad's logo.