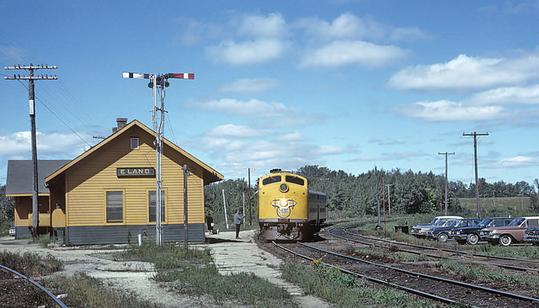 Flambeau 400
The Flambeau 400 was a streamlined passenger train operated by the Chicago and North Western Railway between Chicago, Illinois, and Ashland, Wisconsin, via Green Bay, Wisconsin. It was originally a special service in the summer time.

History
The Flambeau transported the new American middle class to their new leisure time in the North Woods of Wisconsin. Starting in 1935, the earlier trains were called the Flambeau, which operated on basically the same tracks as later trains did, except it skipped Green Bay and ran through Hortonville to Eland. In 1937 was switched to run through Green Bay. In July 1949 the Flambeau was intigrated with the Shoreland 400 and the Valley 400 Between Chicago and Green Bay. Past Green Bay they would be independent trains. Northbound trains traveled via Fond du Lac, and southbound traveled via Manitowoc.

Beginning in 1950 the train received the name Flambeau 400, drawing its new name from the C&NW's popular Twin Cities 400 (which was named for making the 400-mile run from Chicago to Minneapolis, Minnesota in 400 minutes), and Flambeau, the French word for torch. In 1958 the Flambeau 400 and Peninsula 400 received bi-level equipment. Serving the north woods of Wisconsin it originally saw heavy tourist traffic, but by May 1968 it was losing thousands of dollars for the Northwestern, and in 1969 the Flambeau became an unnamed Chicago and Green Bay train with seasonal service to Ashland.

The last Flambeau rolled out of the North Woods on January 5, 1971. Amtrak did not include Green Bay and Ashland in its initial route structure and the service ended May 1, 1971.

Brochure featuring the Flambeau 400 and Peninsula 400. 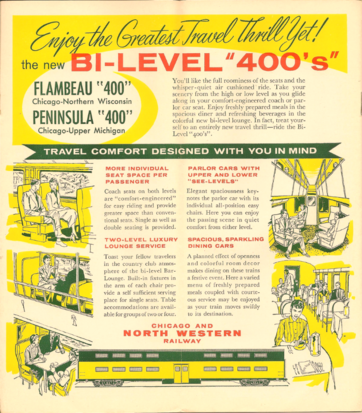 Equipment
The consist differed over the years and by seasonal demand, and the number of cars varied between ten and two. Some trains had a coach-lounge instead of a diner, and other trains had neither. The train used heavy weight 56-seat single level coaches until 1958, when an order of new gallery cars arrived. The train also featured a dining car that had a false top to match the gallery cars. Dining cars were dropped at Green Bay. The motive power in the early years was by R-1 "Ten-wheelers" on the Watersmeet branch, and by E-2-a 4-6-2 Pacifics every where else. By the late 40's and early 50's the train switched to EMD E8 and F7 diesel-electric locomotives. Usually there would be two units, and at Green Bay, one would be dropped for the return Flambeau along with the dining cars.