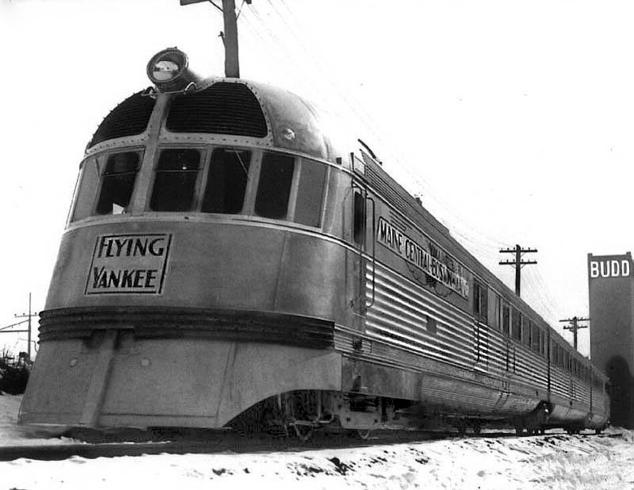 The Flying Yankee
The Flying Yankee was a diesel-powered streamliner built in 1935 for the Maine Central Railroad and the Boston and Maine Railroad by Budd Company and with mechanical and electrical equipment from Electro-Motive Corporation. It was also the name of a passenger train, the third streamliner train in North America after the Union Pacific Railroad's M-10000 and the Chicago, Burlington and Quincy Railroad's Pioneer Zephyr; the Flying Yankee was, in fact, a virtual clone of the latter, except that it dispensed with the baggage/mail space to seat 142 in three articulated cars.

The lightweight train was constructed with welded stainless steel using Budd's patented process. The engine was an 8-cylinder Winton 201-A diesel, driving a generator; the lead truck was equipped with traction motors. It was fitted with air conditioning in all cars. No dining car was provided; instead, meals were prepared in a galley and served to passengers in trays that clipped to the back of the seat in front.

The train was delivered in February 1935, and toured the BM-MEC railroad system before entering service on April 1. The daily route served began in Portland, Maine, then to Boston, Massachusetts, followed by a return to Portland and continuing to Bangor, Maine, returning through Portland to Boston and finally returning to Portland late in the day, a distance of 750 miles per day. This schedule was kept six days a week; the trainset spent Sundays undergoing maintenance. The train proved extremely successful, attracting new ridership and earning a profit for its owners.
Later on, as newer equipment replaced it on one route, it would be switched to other routes, bearing the names The Cheshire, The Minuteman, The Mountaineer, and The Business Man.

As railroad passenger ridership declined in the 1950's the Yankee was also getting old, and thus the trainset, as The Minuteman, was retired, running its last on May 7, 1957. The railroad donated the trainset to the Edaville Railroad tourist/museum operation in Carver, Massachusetts. The train remained on static display there for about 40 years until it was moved in the early 1990's to Glen, New Hampshire after being purchased by the late Bob Morrell, former owner of Story Land.

Most of the train's route is currently operated by Amtrak's Downeaster. However, the modern Amtrak service only runs as far north as Brunswick, Maine; there is no service as far north as Bangor.