The Pullman Company normally lettered its sleepers in a standardized fashion so that they could be interchanged and routed in any train in the United States with some uniformity, but there were some "name trains" to which specific cars were assigned on a regular basis, and C&O's George Washington was one of these. They differed from the standard Pullman sleepers in that they had the name of the train at the center of the letterboard where "PULLMAN" was usually placed, while the word "PULLMAN" was relocated to the end of the letterboard in small letters.

In keeping with the theme, all the sleeping, dining, and lounge cars on the train were named for people, places, or events connected with Washington's life. In the sleepers the rooms were likewise given names of people associated with him. Booklets about Washington's life, followed by descriptions of the new train, were issued in great quantity, the train appeared in advertising in major magazines and on C&O timetables, and the whole introduction was given huge attention and publicity. A country starved for good news latched onto the railway's confidence in the future and willingness to spend money to introduce a fine new train.

The April 1952 issue of Tracks Magazine reported:
"The George is a sizeable train as it pulls into Covington, Ky: engine, three baggage cars, a diner, three coaches, four Pullman cars. The crew to handle it reflects its size: engineer, fireman, conductor, assistant conductor, flagman, Pullman conductor, four Pullman porters, two train porters, dining car steward, ten waiters, two baggagemen."  The George Washington was also known for its diner and its beautiful china. The diners on the George traveled all the way from Washington to Cincinnati. A separate section of the George Washington divided from the main train at Charlottesville, Virginia and operated through Richmond to and from Newport News.

After World War II, C&O chairman Robert Ralph Young attempted to upgrade the George Washington route service with newer equipment and steam turbine motive power. However, despite the C&O's substantial investment and planning, the project (which was to be called "The Chessie") was aborted before service was to begin. In that era, automobiles and airline travel were quickly developing in the United States as the travel mode of preference over long distance passenger rail services.

C&O's passenger services ended in 1971 with the formation of Amtrak. Today, Amtrak's Cardinal passenger trains continue to follow the historic and scenic route of the C&O through the New River Gorge in one of the more rugged sections of the Mountain State. 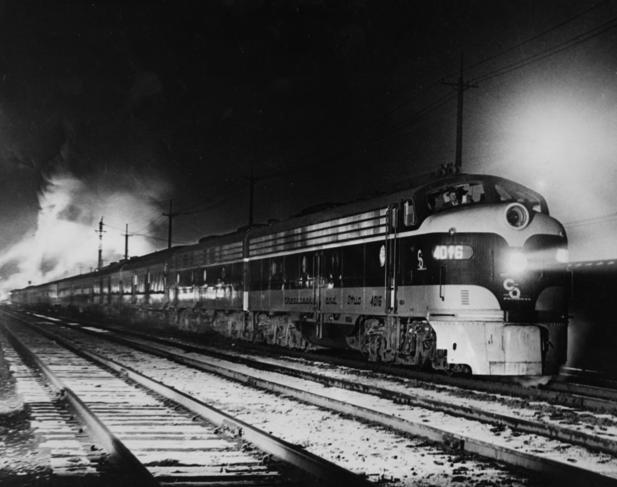 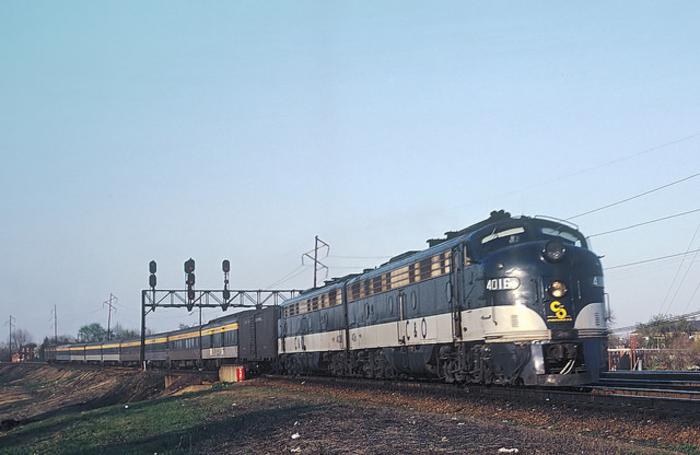 Chessie, The Sleeping Kitten
Part of the reason for the success of the George Washington, aside from the stunning scenery the train passed through, was the highly successful advertising campaign of Chessie the sleeping kitten. The kitten debuted in 1933 to promote the C&O's passenger trains with the catch phrase "Sleep Like A Kitten."[citation needed] While the kitten's rendition is credited to Guido Grenewald the success of the tiny feline as an advertising campaign for the railroad is honored to Lionel Probert, an assistant to the C&O president at the time.

The 1950 coaches
These cars were in two sections divided in the center. Fifty-nine coaches in the 1610-1668 series were delivered to the C&O by Pullman for service on most C&O trains, including the George Washington. Eight of these cars were sold to the Denver and Rio Grande Western Railroad. Good photographs of this car may be found on page 8 of "Chesapeake and Ohio color guide to freight and passenger equipment". C&O removed the corrugations in 1967.

The 1950 sleepers
On the George Washington the C&O used the new Pullman 10-roomette/6-bedroom 85’ sleepers built in the "City of" series, and 56 were built. Some C&O cars were used on the Pere Marquette; these cars were unusual in that the bedrooms were in the middle rather than on one end. 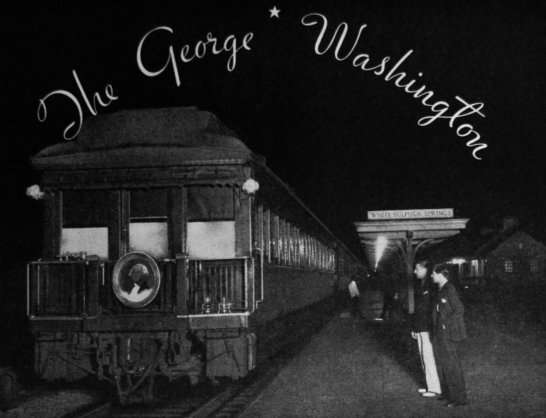 History
When the George Washington was inaugurated as C&O's top-notch train on April 30, 1932, it was one of only two all-air-conditioned, long-distance trains operating in America. (the other was the Baltimore and Ohio Railroad's Capitol Limited, which was instituted as an all-air-conditioned train only a week or so before the George Washington). New equipment was not built for this train; instead, older cars that were completely refurbished by Pullman and by C&O shops. It was still a few years before the streamliner craze, so C&O persisted with the standards of the time using its solid, heavy cars. 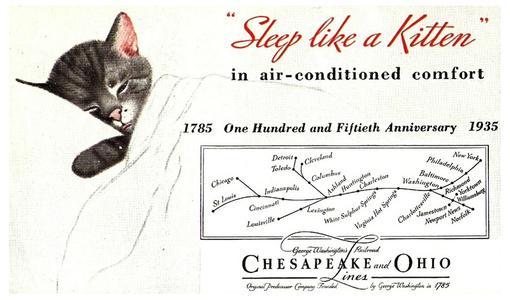 Magazine ad for the  George Washington. The ad was to celebrate the second anniversary of its service in 1934.

Chessie, the Chesapeake and Ohio mascot.