A postcard depiction of the "Golden State" passenger train.

The Golden State
The Golden State was a named passenger train between Chicago and Los Angeles from 1902–1968 on the Chicago, Rock Island and Pacific Railroad (“Rock Island”) and the Southern Pacific Company (SP) and predecessors. Its name was derived from California, nicknamed the “Golden State”.

The Golden State route was low-altitude, crossing the Continental Divide at about 4,600 feet near Lordsburg, New Mexico, although the highest elevation en route was over 6,700 feet south of Corona, New Mexico. Other transcontinental routes reached elevations of more than 7,000 feet in the Santa Fe railway near Flagstaff, Arizona and Union Pacific near Sherman, Wyoming.

In summer 1926, the train left Chicago at 8:30 PM CST and arrived Los Angeles 68 hr 15 min later. During the 1920s and 1930s when Florida became a popular winter destination, the Rock Island and Southern Pacific positioned the Golden State as an escape from the cold eastern and Midwestern winters, with some success.

For years the primary competition was Santa Fe's California Limited which did almost twice the business. When the Santa Fe Chief started in November 1926 the Golden State started running on the same 63-hour schedule with the same $10 extra fare (until 1929).

After World War II the Rock Island and Southern Pacific considered a new 39¾ hour (the best schedule between Chicago and California on UP/CNW and Santa Fe) streamliner to be named the Golden Rocket. This name was an extension of the name Rocket that the Rock Island had introduced on other routes combined with the prefix “Golden” which had been used for many years as a prefix for car names. See also the Rocky Mountain Rocket, the Des Moines Rocket, the Peoria Rocket and others.

The Golden Rocket was to have two sets of equipment (one supplied by each railroad) and compete with Santa Fe's Super Chief, another train between Chicago and Los Angeles. Rock Island ordered cars with a red and silver color scheme, lettered for the Golden Rocket. Southern Pacific was not as enthusiastic, primarily because of upgrades needed on the El Paso–Kansas City portion of the route, which was single track and poorly signaled. After Southern Pacific decided not to participate, Rock Island's set of Golden Rocket equipment was re-lettered and integrated into the Golden State.

Streamlined Version of the Train
The Golden State became a streamliner in January 1948, with vermilion red on the upper body and pier panel and the lower bodies either natural corrugated stainless steel or silver or grey paint on smooth-sided cars. The train ran with many styles of equipment. Smooth-sided and corrugated stainless steel equipment were mixed and heavyweight baggage, Railway Post Office (RPO) and dormitory cars were common.

Transcontinental sleeping car service between New York and Los Angeles on alternate days via the New York Central Railroad and Pennsylvania Railroad was added in 1946 but ended in 1951. Other sleeping car routes on the Golden State included Chicago – Kansas City and Chicago – San Diego (via the Southern Pacific and their subsidiary, San Diego and Arizona Railway, connecting at Yuma, Arizona).

The Golden State had the same declining passenger revenues as other trains in the 1950s and 1960s, although service was not downgraded severely as on other trains. A sleeping car and grill/lounge or dining car was always included. The train was combined with Southern Pacific’s New Orleans – Los Angeles Sunset Limited west of El Paso after April 1964. The last westbound Golden State left Chicago on Monday, February 19, 1968, and the last inbound Golden State pulled into Chicago's LaSalle Street Station on February 21. 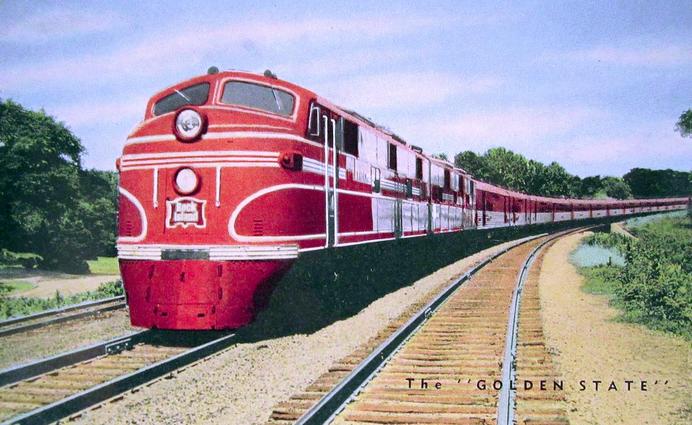 The Southern Pacific line from Los Angeles to El Paso was completed in May 1881; the Golden State ran on the El Paso and Northeastern Railroad from Tucumcari, New Mexico to El Paso. West of there it sometimes used the El Paso and Southwestern Railroad (EP&SW) through Douglas, Arizona to Tucson and sometimes the Southern Pacific (SP) via Deming; SP carried the train Tucson to Los Angeles.

Rock Island had many feeder lines. One was the ‘Choctaw Route’ from Memphis though Little Rock, Oklahoma City and Amarillo to Tucumcari, New Mexico. This line was completed in 1900 to Amarillo, Texas and to Tucumcari, after purchase by the Rock Island, by 1902. Over the years connections were made with through sleeping cars from Memphis and Little Rock to Los Angeles, generally connecting with the Golden State. The Rock Island actually owned the rail line to Santa Rosa, New Mexico, 59 miles south of Tucumcari, but since the routes intersected at Tucumcari the change from Rock Island to Southern Pacific crews and locomotives was made there.

The Rock Island main line crossed the Colorado and Southern and Fort Worth and Denver City main line at Dalhart, Texas. This Dallas-Denver line was the route of the Texas Zephyr and other trains. For many years travelers could connect here to go north and south between El Paso and Denver, the only other route being the Santa Fe to Albuquerque with a second change of trains at La Junta, Colorado.

As part of the merger agreement between EP&SW and SP in 1924, the SP agreed to build a main line through Phoenix, which until then was on a branch from Maricopa. The main line was built from a point near Picacho through Coolidge to Chandler, Mesa, Tempe and Phoenix thence on existing tracks to Buckeye with a new extension to Wellton on the original SP main. This alternate route is no longer in service between Roll and Buckeye, AZ although the tracks are in place.

SP ran four or five trains a day from Los Angeles to El Paso. Usually the Argonaut, the secondary Los Angeles-New Orleans train, ran via Gila Bend (the original 1880 Southern Pacific main line) while other trains ran via Phoenix. Some trains ran via the El Paso & Southwestern Railroad Douglas line and some via the original SP (“stormy” or “north”) line via Benson, Wilcox, Lordsburg and Deming. After 1961, all trains ran via the north line; the former EP&SW between Douglas and El Paso was abandoned in 1961 and the tracks removed in 1963.

Equipment
The Golden State received regular upgrades to equipment. Beginning in 1924 Golden-series observation cars were assigned to the train. These 3-compartment, 2-drawing room observations became famous in the Pullman fleet as the most modern and luxurious equipment available and were also operated on the Santa Fe (Silver series) and New York Central (Central series). Starting in 1940, 8-section, 5-double bedroom rebuilt heavyweight Clover-series cars appeared on the Golden State.

During 1926-29 and after 1948 the Golden State was an extra-fare train, supposedly to account for the costs of the luxury service and the reservation system for chair car seating. In later years the extra fare became something of a joke as service deteriorated badly. Extra fare for Pullman accommodation Los Angeles to Chicago was $10 in 1948, adding perhaps 10% to the total fare. The $3.50 extra fare for chair car passengers had the advantage of individual reserved seats and modern, leg rest, air-conditioned coaches. If you did not want to pay the extra fare, the slower secondary trains (see below) were available. The additional costs in a non-computer era for coach seat reservations were substantial; however, a nationwide reservation system for Pullman (sleeping car) passengers had existed for many decades.

Shortly before World War II three streamlined dining cars (Yucca, Saguaro and Ocotillo) were built by Budd for service on the train. These cars were placed on the Twin Star Rocket in 1945 and late returned to the Golden State.

Two-tone grey, smooth-sided 4-4-2 (four double bedroom, 4 compartment, 2 drawing room) and 6-6-4 (6 sections, 6 roomettes, 4 double bedrooms) lightweight sleeping cars were assigned to the train beginning in 1942. Later that year 4-4-2 sleepers from the discontinued Arizona Limited and Treasure Island Special were also assigned (Imperial Clipper, Imperial Guard, Imperial Throne and Imperial Banner). These cars wore only numbers as the RI/SP did not name their cars until after World War II (and then only for a short time). Streamlined leg-rest (long-distance) low-capacity chair cars from both the SP and RI were added to the Golden State as they were built. The Southern Pacific used “Roman”-style lettering on its equipment, while the Rock Island favored “Zephyr”-style lettering.  In 1947 and 1948, after the demise of the Golden Rocket, streamlined sleeping, chair, meal and lounge cars were added. As five consists were necessary, RI and SP each supplied two or three different cars.

In addition to the luxurious 2-double-bedroom, 1-drawing room observation La Mirada, built for the Golden Rocket, the Rock Island had observation cars Golden Vista and Golden Divan. The SP did not believe in observation cars, feeling them to be a nuisance to switch and non-revenue producing (mid-train lounge cars always made more money off beverage service). They supplied two blunt-end 10-6 (10 roomette, 6 double bedroom) sleeping cars, similar to the cars built in 1950 for the newly streamlined Sunset Limited. After World War II and until 1953 all cars in the train had names, mostly beginning with Golden. After 1953, when the red and silver paint scheme was discontinued, the names were gradually removed from the sleeping cars though the Rock Island retained them for their cars.

A unique type of sleeping car was introduced by Rock Island in 1954; 10 cars with eight roomettes and six bedrooms assigned to the Rocky Mountain Rocket and the Golden State. These cars had more space for long-distance travelers. Standard streamlined sleeping cars with roomettes normally held 22 passengers in various configurations (10-6, 14-4, etc.) but these, along with a “Western” series of 12 roomette, 4 double bedroom cars built for the Wabash and Union Pacific, were extra spacious.

Dieselization began on the Rock Island immediately post-war; in 1947 Southern Pacific bought three 6,000 hp A-B-B sets of EMD E7 units in the vermilion and silver (aluminum) colors. The Southern Pacific E7s were repainted to the familiar “Daylight” scheme (red, orange and black) in 1950.