In 1901 the Santa Fe Railroad completed a 64-mile branch from Williams, Arizona, to "Grand Canyon Village" at the South Rim of Grand Canyon National Park. The first scheduled train arrived from Williams on September 17 of that year; branch line trains and excursions from Southern California, Chicago, and Texas could run directly to the Rim. On June 29, 1929 service commenced on the Grand Canyon Limited, which became a celebrated vacation train.

The westward train split at Barstow, one section running to San Francisco (Oakland-Richmond) via the Tehachapi Loop while the other continued to Los Angeles. In 1938 it began running via Amarillo instead of La Junta; in 1950 it became two trains west of Kansas City, one by each route.

During World War II the Limited often ran in two or three sections carrying troops. In later years the train lost passengers to the railroad's newer trains such as the Super Chief with its streamlined cars.

The Grand Canyon train lost its name in early 1968 when the railway petitioned the ICC to drop service to Grand Canyon National Park; the train would continue as Trains 23 and 24 until the May 1, 1971 handover of all passenger service to Amtrak.

History
Timeline
September 17, 1901: The Santa Fe inaugurates service on the Grand Canyon Railway, running between Williams, Arizona, and the South Rim of Grand Canyon.
January 1905: The first-class, Santa Fe-built El Tovar Hotel opens its doors. The structure is situated just 20 feet from the canyon rim.
June 29, 1929: The Grand Canyon Limited enters service; schedule 66 hours each way between Chicago and Los Angeles.
June 4, 1938: the Grand Canyon Limited is rerouted over the Belen cutoff through Amarillo, Texas. Transit time is reduced to 60 hr 15 min westward and 58 hr 35 min eastward.
July 7, 1945: Combined train No. 2 (The Scout) and No. 24, powered by locomotive #3733, strikes a "Caterpillar" shovel. The locomotive's pilot, headlight, and cylinders are damaged.
June 2, 1946: The Grand Canyon Limited begins running via Riverside-Fullerton) instead of Pasadena.
June 8, 1947: The train receives its first diesel locomotives and stainless-steel lightweight passenger cars. The train is broken into two sections and the name is shortened to the Grand Canyon; the schedule is reduced to 48 hours, 45 minutes.
December 27, 1949: Train No. 23 collides with an automobile at a grade crossing in Highland Park, California, which flattens the wheels on the locomotives.
May 31, 1951: Combined train is sideswiped by train No. 123 in Chandler, Arizona, derailing cars No. RSX 287, express No. 2558, baggage No. 1634, and "chair" cars No. 3108 and No. 3070. No. 123 cars baggage No. 1791 and No. 1601, "chair" cars No. 3087, No. 3158, and No. 1169, diner No. 1461, lounge No. 136, and sleepers L.S. Hungerford, Tonelea, Toreva, and Centgate also sustain damage.
April 5, 1964: Train No. 123 with five diesel units and 16 cars hits a rock slide at 81 miles-per-hour near Doublea, Arizona, which derails the five diesels, a passenger car and ten baggage cars.
Early 1968: The Santa Fe Railway files for permission to discontinue all passenger service to the Grand Canyon National Park; the Grand Canyon train is stripped of its name becoming simply Trains 23 and 24.
May 2, 1971: The final Train 24 that left Los Angeles on April 30 arrives at Dearborn Station in Chicago, ending Santa Fe revenue passenger service. 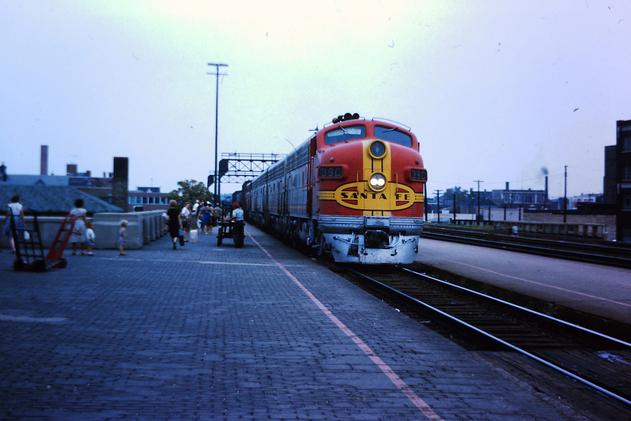 A variety of steam- and diesel-powered locomotives pulled the Grand Canyon Limited.

The original rolling stock delivered for the second-class Grand Canyon Limited were heavyweight cars built by Pullman-Standard and included:

Train length varied; the train often ran in two or three sections during the summer months.

Near the end of its career, in 1968, a typical consist between Chicago and Kansas City included: