The first Hiawatha trains ran in 1935. By 1948, five routes carried the Hiawatha name:

The Twin Cities Hiawatha — the main line route from Chicago through Milwaukee to St. Paul and Minneapolis, in Morning and Afternoon editions;
The North Woods Hiawatha — a spur route off the Chicago-Minnesota main line leading from New Lisbon to Minocqua, Wisconsin;
The Chippewa-Hiawatha — connected Chicago to Ontonagon in Michigan's Upper Peninsula via Milwaukee and Green Bay, Wisconsin;
The Midwest Hiawatha — used the Milwaukee Road's mainline across Illinois and Iowa to Sioux Falls, South Dakota and Omaha, Nebraska (the train split into two parts in Manilla, Iowa); and
The Olympian Hiawatha — which traversed the Milwaukee mainline from Chicago-Twin Cities-Seattle/Tacoma.

The Milwaukee Road added a second train to the route on January 21, 1939, and the two trains were known as the Morning Hiawatha and Afternoon Hiawatha, although the brand Twin Cities Hiawatha was often employed. In 1947–1948 the Milwaukee Road again re-equipped its major passenger routes with new lightweight equipment. The Morning Hiawatha (trains 5 and 6) and Afternoon Hiawatha (trains 3 and 2) continued to operate between Chicago and Minneapolis until the latter train was discontinued on January 23, 1970. The last runs of the Morning Hiawatha were on April 30, 1971, immediately prior to the introduction of Amtrak.

Olympian Hiawatha
A new long-distance Hiawatha, the Olympian Hiawatha from Chicago to the Pacific Northwest, was inaugurated in 1947. The sleeper cars and Skytop sleepers were not delivered until late 1948 and early 1949, so the train ran with Pullman heavyweights on the rear end, until delivery of the new cars. The train was designed by the famous designer Brooks Stevens of Milwaukee. Six Creek-series 8-bedroom Skytop lounge-sleepers were created, which had more windows and a more bulbous rear end than their Rapids-series parlor Skytop counterparts on the Morning Hiawatha and Afternoon Hiawatha. This train ceased operations on May 22, 1961, and the surplus equipment was sold to Canadian National Railways. One car, #15 Coffee Creek from the Olympian Hiawatha, is undergoing restoration. (http://www.coffeecreek.info/)

Chippewa-Hiawatha
The Chippewa began in May 1937, running north through Milwaukee and Green Bay to Channing, Michigan (later extended to Ontonagon). It carried the Hiawatha moniker between 1948-1957 and was discontinued in 1960.

Amtrak
Under Amtrak, which assumed control of most intercity passenger rail service in the United States on May 1, 1971, the Hiawatha name survived in two forms. The first was a Chicago–Milwaukee–Minneapolis service, known simply as the Hiawatha. This would be renamed the Twin Cities Hiawatha, then extended to Seattle and renamed the North Coast Hiawatha. This service ended in 1979.

Route map of the Hiawathas. 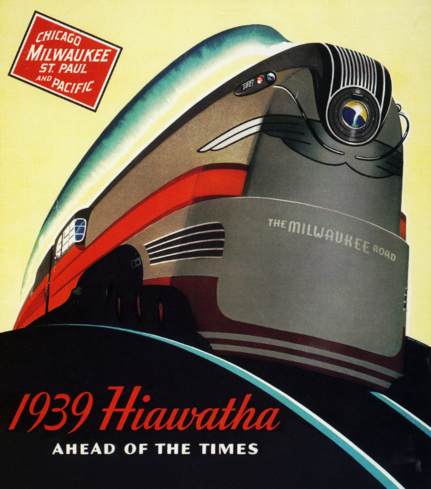 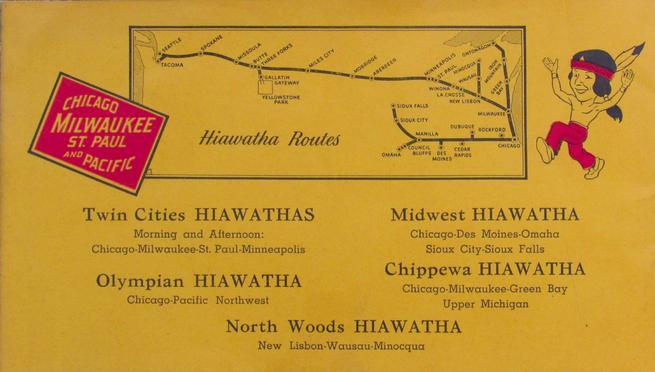 The Milwaukee Road's Hiawatha Passenger Trains
The Hiawatha's were a fleet of named passenger trains operated by the Chicago, Milwaukee, St. Paul and Pacific Railroad (also known as the Milwaukee Road) between Chicago and various destinations in the Midwest and Western United States. The most notable of these trains was the original Twin Cities Hiawatha, which served the Twin Cities in Minnesota. The train was named for the epic poem "The Song of Hiawatha" by Henry Wadsworth Longfellow.