The International Limited
The International Limited was a named passenger train operated between Chicago and Toronto. It was originally operated by the Grand Trunk Railway of Canada and its successors the Canadian National Railway and Grand Trunk Western Railroad. When the route was revived in 1982, it was operated jointly by Via Rail and Amtrak. The Amtrak service was discontinued on April 25, 2004, due to decreasing ridership: down from 125,126 in 1997 to just 88,045 in 2003.

When the Canadian National and Grand Trunk Western controlled the operations of train number 14, the International Limited, from Chicago's Dearborn Station to Montreal's Central Station, the train was around 12 cars long, including GTW & CNR baggage-express cars (two), CNR coaches (five), CNR named 12-1 Pullman sleepers (three), CNR 8-1-2 named Pullman sleeper (one), and last but not least, an unusual 2-3-1 buffet, lounge, solarium from the CNR. It departed from Dearborn Station at 8:00 pm, behind a GTW U4-b 6400 Northern-type steam locomotive. At Port Huron, St. Clair Tunnel Company electrics would pull the train through the tunnel to Sarnia, Ontario, where a CNR 5700-class Hudson (4-6-4 wheel arrangement) or a CNR 6400-class streamlined Confederation (4-8-4 wheel arrangement) would take the train to Montreal. The 15-hour train ride left Chicago at 8:00 pm and arrived in Montreal at around 11:00 am the next morning. The train left daily, stopping at Chicago, Sarnia, Toronto, and Montreal, as well as a variety of other stops along the way. A second section operated in the opposite direction, as train number 13, leaving Montreal and travelling to Chicago, stopping at the same stations along the way. The Chicago-to-Montreal section is shown in the photograph, behind a CNR 5700-class Hudson.

Amtrak did not retain the International Limited and it made its last run on April 30, 1971. It was the last intercity train to depart Dearborn Station in Chicago.

Amtrak/Via operation (International)
Amtrak and Via Rail revived the International Limited in 1982 by extending Amtrak's Blue Water Limited, which then terminated at Port Huron, to Toronto. In contrast to its predecessor, it used ex-Penn Central west of Battle Creek, Michigan, in common with Amtrak's other Michigan trains. At the beginning, both Amtrak and Via equipment was used; Amtrak typically using diesels and Amfleet coaches, while Via used LRCs and Tempo coaches. The first train departed Chicago on October 31, 1982. On June 13, 1983, Amtrak renamed the train the International, which it carried until its discontinuance.

Via Rail re-routed the International off its original CN route in 1990 to a more northerly route. This new route enabled it to service Kitchener, Ontario but added an hour to its running time. Toward the end of the decade, Amtrak considered running the train via Durand and Detroit, dropping Flint and Port Huron, but nothing came of this proposal.

The train consisted of two or three coaches and a food-service / custom-class car combination. The train was powered alternately by a Via Rail or an Amtrak F40PH locomotive and the cars could be any combination of Amtrak's Heritage, Amfleet I and II, or Horizon Fleet coaches or by cars provided by Via. From Monday through Saturday, the opposing trains ran as Amtrak-Via train numbers 364 and 365. On Sundays however, they ran as train numbers 366 and 367. By 1995, both trains usually ran with a set of 4 to 5 Superliners.

In later years, Amtrak P42 locomotives replaced the F40s. In 2002, they mainly consisted of only Horizon Fleet and Amfleet coaches because the Superliners were in for extensive renovation. The train was discontinued in 2004 due to falling ridership. Via Rail still runs trains on the route between Toronto and Sarnia, Ontario, while Amtrak replaced its portion of the service with the Chicago-Port Huron, Michigan Blue Water. 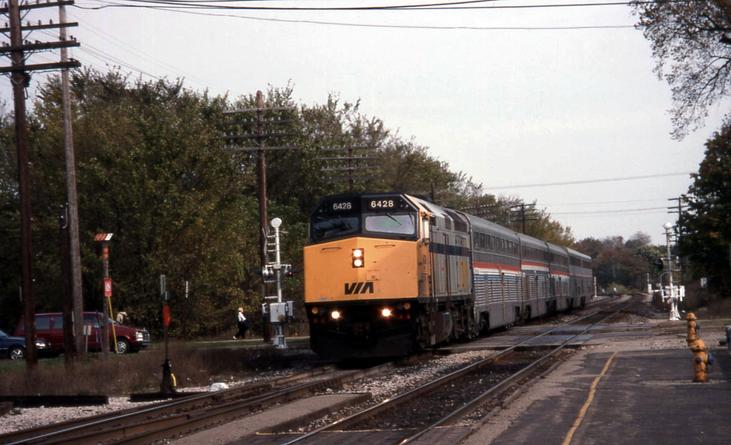 A Via Rail EMD F40PH leads the International, with Amtrak Hi-Level and Superliner coaches into East Lansing in 1996.

The International Limited operating on the Grand Trunk Railway, circa 1909. 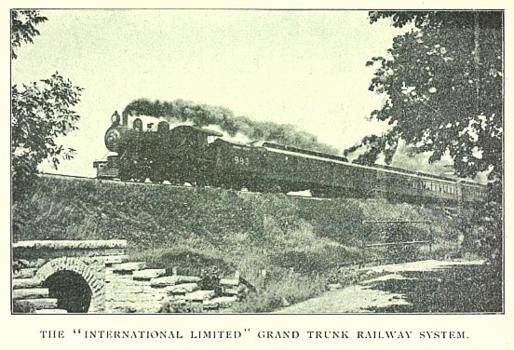