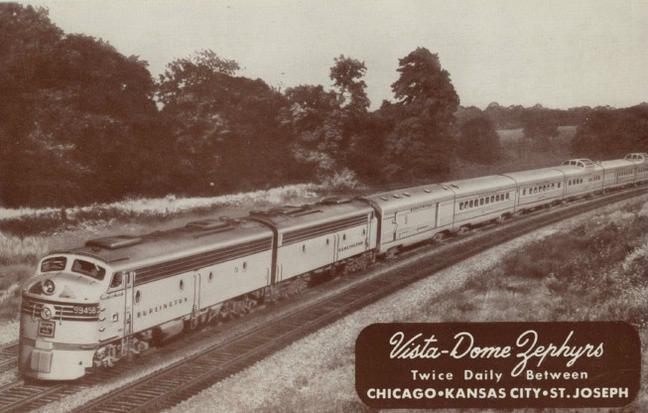 The largest fleet of named streamliners in the United States were the Burlington's Zephyrs. Competing in markets against the famed Eagles, Chiefs, 400's, Cities and Hiawathas on almost every route, the polished Zephyrs covered almost every route on the mainline of the Burlington and for years held the speed/distance title in the record books.

History
The Kansas City Zephyr made its inaugural run on February 1, 1953, as an all-new daylight streamliner between Chicago and Kansas City. The new train was prompted by the completion the previous October of the $16-million "Kansas City Shortcut", 49 miles of new track that made the route shorter, flatter, and straighter. The new alignment shaved two hours off of the previous shortest route, and made CB&Q optimistic that it could compete successfully against its entrenched rival, the AT&SF, on this busy route.

Two of the original railcars from the Kansas City Zephyr are still in use today. The Silver Garden, 1952 Budd Dome Lounge Coach and the Silver Terrace, 1952 Budd Dome Observation cars current operate on the Branson Scenic Railway in Branson, Missouri.

Subsequent Service On The Route
The Illinois Zephyr and Carl Sandburg are two passenger trains operated by Amtrak that run 258 miles between Chicago and Quincy, Illinois and are the descendants of the Kansas City Zephyr and American Royal Zephyr passenger train routes operated by the Chicago, Burlington and Quincy Railroad until 1968 and 1971. The name Zephyr is preserved in the current name of the Illinois Zephyr. Today the Illinois Zephyr enjoys strong support from the communities it passes through. They all promote the train line as a means of getting to Chicago, and train tickets are frequently sold out. As such, this route is part of the Midwest Regional Rail Initiative, which calls for an upgrade of service from the current 1 daily round trip to 4 or more daily round trips. The Carl Sandburg was added on October 30, 2006. The average travel time from Chicago to Quincy is 4 hours, 30 minutes.