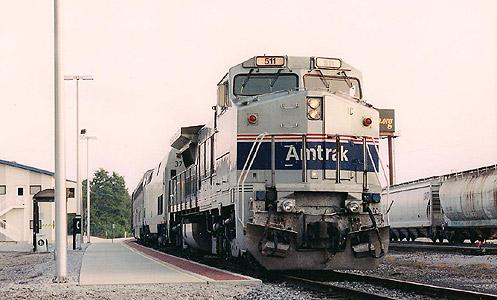 Between May 1971–August 1974 Amtrak's Floridian ran from Chicago to Florida via Indianapolis and Louisville. Due to poor track conditions on the Penn Central trackage in Indiana, the train was rerouted to the west north of Nashville, Tennessee. In April 1975 the train was routed back east over the former Monon Railroad, again serving Louisville, but bypassing Indianapolis to the west. The Floridian served Louisville until its discontinuance in October 1979.

On December 17, 1999, the Kentucky Cardinal started running as an extension of the Hoosier State, which ran four days a week between Chicago and Indianapolis (filling in the gaps in the Cardinal schedule). The train, operated along trackage that had last been used by the Floridian in 1974, was an attempt to attract express business from United Parcel Service, which maintains its air-express hub at Louisville International Airport. At first the train only ran from Indianapolis south to Jeffersonville, Indiana, where a new Amtrak Mail and Express facility was built. The city of Louisville spent $370,000 in 2001 to renovate its Union Station for the service, and on December 4 the Kentucky Cardinal started to use a new track on the west side of the Union Station parking lot.

The train was handicapped by inconvenient departure and arrival times and slow travel times, especially on the segment from Indianapolis south to Louisville. This segment was operated over the Louisville and Indiana Railroad, which had purchased the line from Conrail in 1994, and had a speed limit of 30 miles per hour over most of the route due to its jointed rail. This made travel on the Kentucky Cardinal slower than automobile traffic on the parallel Interstate 65.

With the opening in 1999, Greyhound began running Thruway Motorcoach bus connections from Jeffersonville south to Nashville, Tennessee, with stops at Elizabethtown and Bowling Green, Kentucky. Though rail passenger advocates tried to get the train's route extended to Nashville in an effort to increase ridership, Amtrak lost its mail contract, and the Kentucky Cardinal last ran July 4, 2003, restoring the old Hoosier State on July 6 (the Cardinal ran both ways on July 5).

The tracks used were originally part of the Pennsylvania Railroad system, and are now owned by the Louisville and Indiana Railroad. The following lines were used:

The Kentucky Cardinal at Jeffersonville, Indiana in 2001.