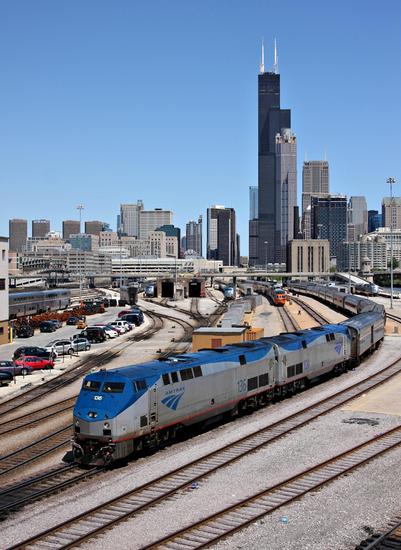 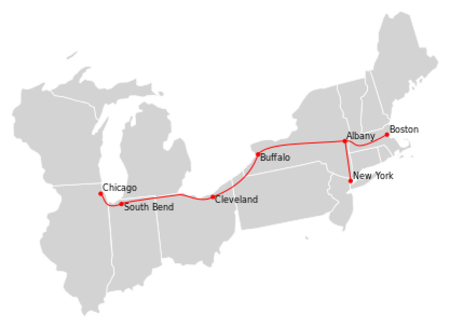 Amtrak Train No. 49, the Lake Shore Limited, pulls into the Croton-Harmon Station in Croton-on-Hudson, NY.

Amtrak did not include service over the New York Central's Water Level Route in its original route plan; Chicago–New York traffic would be handled by the Broadway Limited which operated over the Pennsylvania Railroad's main line via Pittsburgh. Between May 1971 – January 1972 Amtrak operated the Lake Shore over the route with support from the state of Ohio. The modern Lake Shore Limited began running October 31, 1975 with both New York and Boston sections.

The Lake Shore Limited was the last train to use the decaying Buffalo Central Terminal, departing on October 28, 1979. Since then it has used Buffalo–Depew.

On the night of August 3, 1994, around 3:45 am, the westbound Lake Shore Limited, with two locomotives and fifteen cars, and carrying roughly 320 passengers, and nineteen crew members, derailed on Conrail-owned tracks (now owned by CSX) near Batavia, New York. The initial derailment of the wheels of the third car on the train, occurred at milepost 403.7, and the train traveled for another three miles, until the general derailment of the train, at milepost 406.7. In all, fourteen cars derailed, with some sliding down an embankment, and 118 passengers and crew members were injured. However, there were no fatalities. The National Transportation Safety Board determined that the probable cause were the wheels coming off a section of flattened rail.

Possible future
In the January 2011 issue of Trains Magazine, this route was listed as one of five routes to undergo improvement evaluation by Amtrak in FY 2011, just as the previous five routes (Sunset, Eagle, Zephyr, Capitol, and Cardinal) had been examined in FY 2010.

Amtrak published its Performance Improvement Plan (PIP) for the Lake Shore Limited in September 2011. Amtrak outlined two initiatives for improving the performance of the train:

Club-Diner: The dining car on the Lake Shore Limited would be converted to a so-called "Club-Diner". It would stay open during the entire journey, instead of just during set meal times, and would cease accepting cash. The existing lounge/cafe car would upgrade its offerings to include salads and sandwiches previously introduced on the Acela Express. Amtrak's desired goal was to bridge a perceived intermediate gap between the existing cafe offerings and the higher-priced fare in the diner.

Amtrak considered more radical changes to the operations of the Lake Shore Limited, including a re-route over the Chicago–Detroit Line, but rejected them.

Equipment
A typical Lake Shore Limited features both Boston (numbers 448/449) and New York (numbers 48/49) sections, which run combined between Chicago and Albany. The New York section includes a baggage car, Heritage Fleet dining car/dinette, two Viewliner sleeping cars, an Amfleet II Cafe car, and four (sometimes five) Amfleet II coaches. The Boston section has its own baggage car, one Viewliner sleeping car, two (sometimes three) coaches, and an Amfleet cafe car. During the 2000s and 2010s the Lake Shore Limited carried either a Horizon Fleet or Amfleet lounge car. Between November 2007 and December 2009, maintenance problems led Amtrak to withdraw the Heritage diners and substitute Amfleet Cafe-based diner-lites, a move that became a source of passenger displeasure and a liability for the route, as the Heritage cars could prepare fresh food on board.

At Albany, the train splits into its Boston and New York sections. Low demand and cost-cutting led Amtrak to drop through service to Boston between 2003 and 2008; passengers made a cross-platform transfer to a shuttle train. The New York section uses a single dual-mode P32 for third-rail power in Pennsylvania Station. West of Albany power is provided by two or three GE Genesis P42DC or P40DC diesel locomotives, which continue on to Boston.

Route details
The Lake Shore Limited between Chicago and New York City operates over the trackage of five railroad companies. The distance between Chicago and New York is 959 miles (1,543 km); between Chicago and Boston 1,017 miles (1,637 km). From Chicago to Cleveland, the train rides the Chicago Line, which belongs to Norfolk Southern Railway, and is also used by Amtrak's Chicago-Washington, DC, train, the Capitol Limited. From Cleveland to Poughkeepsie, the Lake Shore rides on trackage belonging to the following CSX Transportation subdivisions: Cleveland Terminal, Erie West, Lake Shore, Buffalo Terminal, Rochester, Mohawk, Selkirk, and Hudson. From Poughkeepsie to the Bronx, the train operates on Metro-North Railroad's Hudson Line. And Amtrak tracks are used twice: between Hoffmans and Schenectady; and from the Bronx to Penn Station. The Albany-Boston extension runs on the trackage of several companies as well. The train travels on Amtrak's Post Road Branchfrom Rensselaer to nearby Schodack, from Schodack to Worcester on CSX's Berkshire and Boston subdivisions, and from Worcester to South Station on track owned and operated by the Massachusetts Bay Transportation Authority (MBTA).

In FY 2010, only fifteen percent of passengers traveled between endpoints (Chicago and Boston or New York), although those travelers contributed 27 percent of ticket revenue. The remainder traveled to and from intermediate stations. According to Amtrak, passengers making connections in Chicago accounted for "a significant portion" of the Lake Shore Limited’s ridership and revenues.

In the late 1990s Amtrak considered adding Dunkirk, New York, as a stop between Buffalo and Erie. Dunkirk was listed as a stop with service "to commence on a date to be announced" on several timetables, but the stop was never added. Amtrak studied restoring the Hammond-Whiting stop in 2010–2011 but rejected it because of operational considerations.

Due to construction at the Rochester station, the Lake Shore Limited must make three stops at this station, as the train is too long for the temporary platform. The stops are as follows: The first for Massachusetts bound/originated baggage and sleepers, the second for all coach level passengers, and the third for all remaining sleepers and baggage. 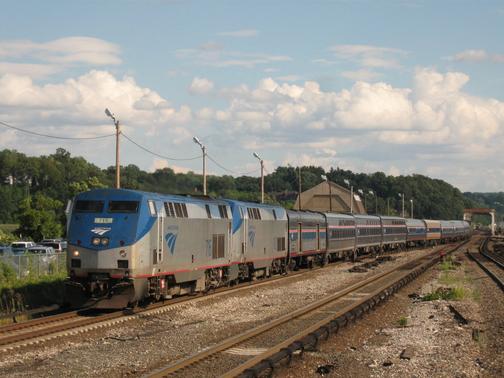 A Lake Shore Limited train backs into Union Station in Chicago, with the Willis Tower visible in the background.