The Lark
The Lark was an overnight passenger train of the Southern Pacific Company on the 470-mile run between San Francisco and Los Angeles. It became a streamliner in 1941 and was discontinued on April 8, 1968. The Lark ran along the same route as the Coast Daylight and was often pulled by a locomotive wearing the famous Daylight paint scheme of orange, red, and black.

Overview
After 1941 Southern Pacific trains 75 (northbound) and 76 (southbound) were deluxe all-room Pullman (sleeping car) trains between San Francisco and Los Angeles. The last two cars in each consist of the Lark ran along the east side of San Francisco Bay to Oakland and were known as the Oakland Lark. The Lark was to overnight travelers what the Morning Daylight and Noon Daylight were to day travelers in the San Francisco–Los Angeles market: safe, reliable, deluxe transportation. The Lark was the only streamlined all-room sleeping car train to operate entirely within a single state and the only all-room train operating strictly on the West Coast.

The train's namesake, though neither nocturnal nor native to the New World, has historically symbolized the arrival of a new day, mainly through Chaucer (The Knight's Tale of The Canterbury Tales) and Shakespeare's sonnets which describe the lark's singing at first light.

History
On March 2, 1941, the Lark became a streamlined 12-hour train with cars in two shades of gray pulled by the same locomotives that pulled the Daylights. This Lark had three of the five types of pre-war lightweight streamlined Pullman cars: the 100-series 10-roomette, 5-double bedroom; the 200-series 4-double bedroom, 4-compartment, 2-drawing room; and the 300-series 13-double bedroom. Food and beverage service was provided by the Lark Club, a three-car articulated food service unit (kitchen/crew dormitory car, dining room car, and tavern-lounge car from front to rear) that became known for late-night business transactions and a place to share a nightcap, and in the morning, offered a full breakfast menu. Late-night refreshments were also offered in the 400-series sleeper-buffet-lounge-observation car which had two bedrooms, a compartment and a drawing room and carried the illuminated Lark drumhead on the rear (and formed half of the peacetime Oakland Lark).

Postcard photo of the Southern Pacific train The Lark at Glendale, California heading south on April 16, 1965.  Photo by Leo Caloia.

All Photos by Drew Jacksich. 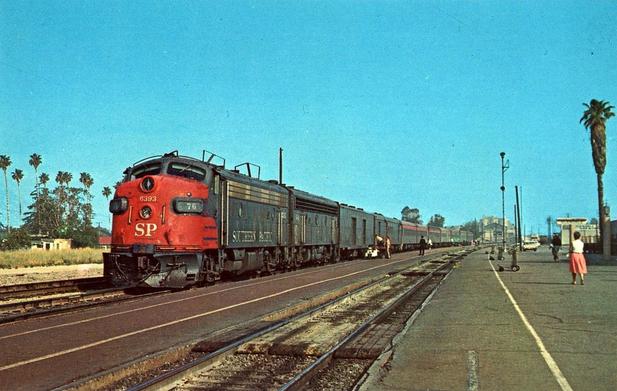 During World War II coaches were added to the train along with 500-series 6-section, 6-roomette, 4-double bedroom cars reassigned from Overland Route service to the Oakland Lark. A few 9000-series 10-roomette, 6-double bedroom and 9300-series 22-roomette sleeping cars were built for the train in 1950, replacing some of the 1941 cars which were reassigned to other SP trains. Diesels replaced the last steam locomotives in January 1955.

More businessmen were leaving the train for the airlines. On July 15, 1957, the Lark was combined with the Starlight, an overnight chair car train. The Lark kept its name and number but was no longer all-Pullman. The 1960s saw the removal of the triple-unit diner/lounge and the replacement of the two-tone gray color scheme by silver with a red stripe. The "Daylight" colors were also gone from the locomotives, replaced by dark gray with a red nose. By the mid-sixties, an average of less than 100 passengers were riding the train.

The Southern Pacific tried to discontinue the Lark in late 1966 but public outcry and newspaper editorials urged the California Public Utilities Commission to order service for one more year. By the end of 1967 the Lark was down to a baggage car, one sleeping car, a couple of chair cars, and an Automat car, pulled by a 3,600-hp EMD SDP45. The train was still numbered 75 and 76. The Lark was finally discontinued on April 8, 1968.