The Laurentian
The Laurentian was a named passenger train operated by the Delaware and Hudson Railway between New York City and Montreal, providing same-day service. The train used the D&H's famed route along Lake Champlain north of Albany, New York. The Laurentian, along with its overnight companion the Montreal Limited, was the flagship of the D&H from its inauguration in 1923 until its discontinuance on the formation of Amtrak in 1971. Since 1974 Amtrak has operated the Adirondack over the same route.

History
The D&H inaugurated the Laurentian in 1923 as a daytime service between New York City and Montreal, Quebec, via Albany and Lake Champlain. Steam locomotives pulled the train from its inception until 1940 when it received diesel equipment. The New York Central Railroad handled the train between New York and Albany. Altogether the distance between the two cities was 375 miles (604 km).

By 1964 the D&H, which showed little interest in passenger service after the Second World War, considered discontinuing the Laurentian, prompting an outcry from riders in upstate New York. The Laurentian survived and received an unlikely upgrade in 1967 at the hands of Frederic C. Dumaine, Jr., the D&H's new president and a proponent of passenger travel at a time when most railroads in the United States were scaling back or abandoning service altogether. The D&H acquired streamlined ALCO PA diesel locomotives from the Atchison, Topeka and Santa Fe Railway (ATSF) and passenger coaches from the Denver and Rio Grande Western Railroad (D&RGW). Repainted in the D&H's distinctive blue-silver-yellow livery, the Laurentian cut an impressive figure in its last years and this equipment remained in use until the start-up of Amtrak in 1971. Amtrak declined to retain the New York-Montreal trains, and the Laurentian made its last run on April 30, 1971. In a rare move, however, Amtrak used D&H equipment between Albany and Montreal between 1974–1977 for the newly-named Adirondack passenger service. 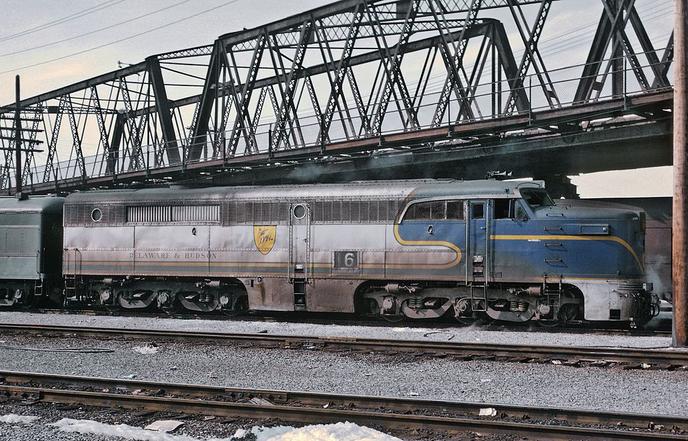 Delaware and Hudson ALCO PA-4 16 with Train 35, The Laurentian, at the Albany-Rensselear, NY station on February 22, 1970. Photo by Roger Puta.