Growing-up on the Santa Fe: Riding the Chiefs and Business Cars
by Patrick Henry

My father worked for the Santa Fe Railroad for 41 years in operations and as an executive.  My life growing up was all about trains and riding the beautiful stainless steel Santa Fe Streamliners.

My favorite Santa Fe passenger train was not the Super Chief  but a little passenger train called the Lubbock Streamliner  that ran from Amarillo Texas to Lubbock, Texas, a trip just a little over a hundred fifty miles.  The train consisted of a beautiful E-9 locomotive, baggage car, chair car and a Pullman sleeper with roomettes, berths, and double bedrooms. The train would connect with the San Francisco Chief  in Amarillo and the sleeper from Chicago would be switched off and added to the Lubbock Streamliner.  The reason this train meant so much to me was over the years I got to know the crew and when we came down from Chicago to Lubbock to see my grandparents they always invited me to ride the engine with them.  I would climb up into the cab and they would have a little lunch for me and off we would go for the 2-½ hour trip to Lubbock. The engineer, Mr. Ellington, would always assign me a job such as blowing the whistle or calling our signals.  The train made about six stops and at each station people would be there on the platform to wave to us as we pulled in.  It was such a wonderful trip riding the engine and having a homemade sandwich that the Mr.Ellington’s wife had prepared for us.

My other favorite trip was riding the Santa Fe Super Chief  from Chicago to Los Angeles and sitting in the dome car while going over Raton Pass and Cajon Pass. The food was prepared by Fred Harvey’s dining service and was always amazing.  I can remember going to sleep in the upper bunk of my parents bedroom and listening to the sound of the whistle in the night.  I was also amazed at the speed we traveled between Dodge City and La Junta sometimes hitting close to 100 mph.  I also had the pleasure of riding the San Francisco Chief, Texas Chief, Grand Canyon, and the Chief when I was growing-up.

As much as I loved the passenger trains and riding in the dome or having Santa Fe’s famous French Toast in the diner, nothing was ever greater than riding on my dad’s business cars.  The view from the back platform was beautiful and to sit and ride for days on a business car was spectacular.  I loved the chefs and they seem to always become part of family to me on the business cars.  I remember when my dad’s chef died when we were in Amarillo and that I cried for days.  He was like a grandfather figure to me.

I can remember my father going on inspection trips on the back of local freight trains.  The ride would be rough but it was so nice to see new towns and to overnight on a siding in little places such as Clinton, Oklahoma or Pampa, Texas.  One of my fondest business car trips was from Dallas, Texas to El Paso, Texas on five different passenger trains over a three day period.  We went from Dallas to Ft. Worth on one train, Ft. Worth to Brownwood on another train, Brownwood to Clovis, NM on the California Special, then to Belen on the San Francisco Chief and finally on the El Paso passenger train from Belen. My dad always let me sit on the step box and ride outside on the platform as long as the track was smooth and I would spend hours out there until they called me to lunch or dinner.  Dining on my dad’s business car usually meant big rib eye steaks, potatoes, fresh baked bread and vegetables.  The desserts were out of this world from homemade apple pie a la mode to strawberry shortcake.

Today I am blessed to own two private train cars and use them for business and entertaining.  I named them after my mom and dad and travel about 20,000 miles a year on them.  I invite you to stop and say hello if you ever see us on the back of Amtrak or stopped in a station.


About the Author: Patrick Henry is President and CEO of Patrick Henry Creative Promotions, located in Houston, Texas, and owns the private railcars "Warren R. Henry" and "Evelyn Henry." 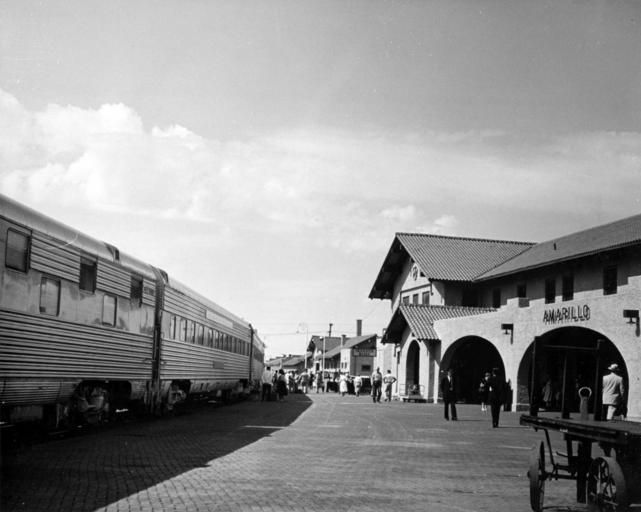 The San Francisco Chief at Amarillo, Texas, circa 1955.