M-10000
The Union Pacific Railroad's M-10000, delivered to the railroad on February 12, 1934, at a cost of $230,997, was the first internal combustion engine, lightweight streamlined express passenger train in the United States. The carbodies and interior fittings were built by Pullman-Standard. The 600 hp V12 distillate engine was built by General Motors' Cleveland subsidiary, the Winton Engine Company. The Electro-Motive Corporation (EMC) supervised installation of the Winton engine into the Pullman-built body. This engine design was unrelated to the later 201 or 201A Winton diesels. EMC, being primarily a marketing organization during this time, did not manufacture any component parts of the M-10000. The air brake compressor, main generator, traction motors and control equipment were manufactured by the General Electric Company.

Pullman engineer Martin P Blomberg helped style the exterior of the M-10000 and the M-10001. The US Patent and Trademark Office assigned U.S. Patent D100,000, U.S. Patent D100,001, and U.S. Patent D100,002 for the design. The M-10000 featured a turret cab, an inward-slanting Duralumin body with a nose formed of parabolic arches, and large nose air intakes on each side of the centerline. The train was painted in Armour Yellow with Leaf Brown roof and undersides. Later, the area around the front air intake was also painted yellow. Dividing lines of red separated the colors. 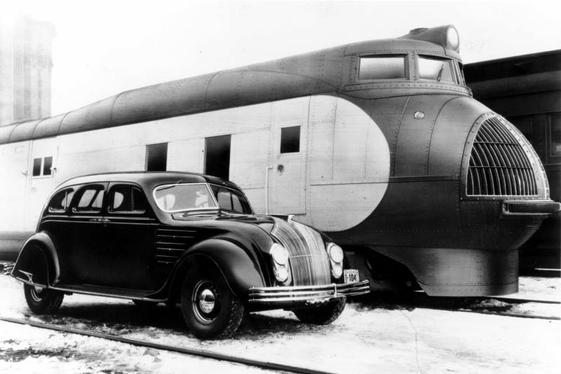 The M-10000 was as much a publicity tool as a practical train. During 1934 it made a 13,000-mile exhibition tour across the US, visiting Washington, DC, for inspection by Franklin Delano Roosevelt. Everywhere it went it attracted crowds and press attention, hosting almost 1,000,000 visitors. M-10000 succeeded in its aim of helping reinvent and modernize the passenger train in the popular imagination of Depression-era America, yet in contemporary memory it has long since been eclipsed by the later Pioneer Zephyr. Many other Streamliners inspired by the M-10000 were rapidly developed, and within 15 years most major American railroads had a "streamlined" train of some type.

The M-10000 was eventually named City of Salina for the Kansas City-Salina route it served, but it was also nicknamed the "Tin Worm" or "Little Zip". Since it was built of Duralumin (or Duraluminum; an alloy containing aluminum, copper, manganese and magnesium, aka aircraft aluminum), the M-10000 was scrapped in early 1942 to contribute its materials to the war effort, among other reasons.