After Barkett died, title transferred to the Civic Plaza National Bank and in September 1987 the train was moved to the Mid America Car Corporation. In 1984, Dave Stimson, a player for the Kansas City Chiefs, purchased the equipment. In 1987, the train was sold to John C. Lowe. He and two other individuals have formed the Mark Twain Corporation. Through 2007, the train was in unrestored condition and located in Minooka, Illinois.

On 24 January 2000, it was supposedly moved to Granite City, Illinois for display in a downtown redevelopment effort. However, in August 2008 it was shown by Gateway Rail Services in nearby Madison, Illinois to a group from the 2008 St. Louis Railroad Prototype Modelers Meet. A 2011 report from a Burlington railfan says the train is still at Gateway. A Google Maps view of the facility shows the trainset's separate cars grounded inside the main gate area. A fifth "Zephyr" car, apparently the dinette-coach built for the Pioneer Zephyr, is also stored there. The trainset is for sale by Rail Merchants International, see advertisement below.

A postcard depiction of the Mark Twain Zephyr, circa 1935. 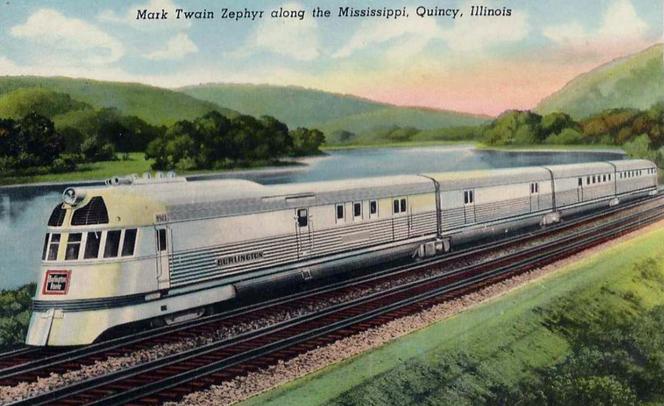 Mark Twain Zephyr
The Mark Twain Zephyr was an early four-unit articulated trainset that was similar to the Pioneer Zephyr in style. The train was built by the Budd Company and was powered by a diesel engine produced by the Winton Engine Company. The train was named Mark Twain Zephyr because it was scheduled to provide service from St. Louis, Missouri to Burlington, Iowa via Hannibal, Missouri, Twain's hometown. The train's exterior structure used stainless steel, and had a "shovel nose" front.

The locomotive, number 9903, was named "Injun Joe." The three cars received other names of Mark Twain characters, "Becky Thatcher," "Tom Sawyer," and "Huck Finn." The train was christened on 25 October 1935 in Hannibal by Nina Clemens Gabilowitsch (1910-1966), the granddaughter and ultimately last descendant of its namesake. The ceremony was broadcast coast to coast on CBS radio. Two days later, it entered revenue service.

It was retired by the Chicago, Burlington and Quincy Railroad (CB&Q) and then was purchased by Frank Dashner of Glenwood, Iowa in June 1960. In June 1962, the train was acquired by Ernie Hays for $6,500 and placed on exhibit at the Midwest Old Thresher Association grounds in Mount Pleasant, Iowa. In 1972, after many years of neglect, the train was sold to Alex Barkett of the Building Leasing Corporation, and moved to Kansas City.