Route of the National Limited.

History
The B&O had previously operated through cars between New York and western points as the National Limited since December 1916. The all-Pullman version of the National Limited was introduced by the B&O on April 26, 1925, as trains #1 (westbound) and #2 (eastbound). B&O's New York terminus was actually in Jersey City, New Jersey, at the Central Railroad of New Jersey Terminal. Passengers were then transferred to buses that met the train at the platform. These buses were then ferried across the Hudson River to Manhattan Island, where they proceeded to various "stations" including the Vanderbilt Hotel, Wanamaker's, Columbus Circle, and Rockefeller Center, as well as into Brooklyn. 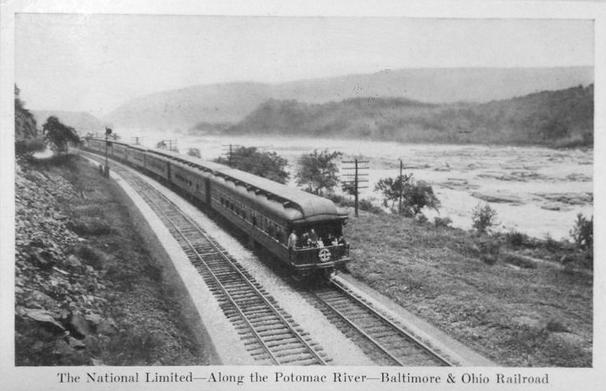 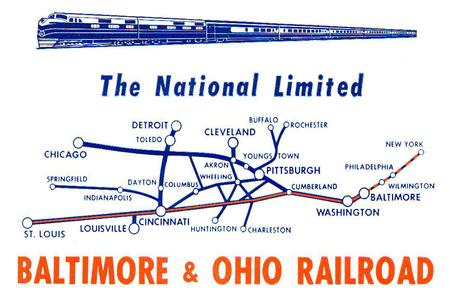 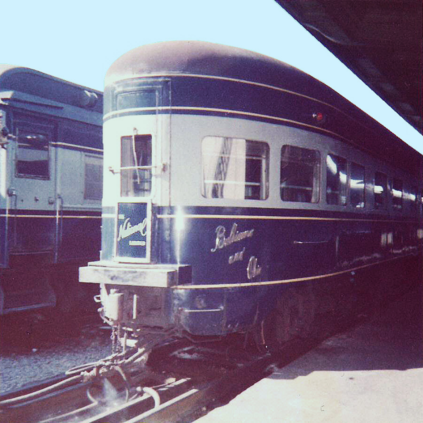 The National Limited
The National Limited was the premier train of the Baltimore and Ohio Railroad (B&O) on its route between New York City and St. Louis, Missouri, with major station stops in Washington, D.C., and Cincinnati, Ohio. It operated from 1925 to 1971. For much of its life it offered exclusive all-Pullman service, and it was the first long-distance train to be entirely air-conditioned. The National Limited was one of many trains discontinued when Amtrak began operations in 1971. Amtrak revived the name for another New York–St. Louis service which did not use the B&O route.

The National Limited traversed some of the most challenging terrain in eastern railroading, climbing the Appalachian Mountains in western Maryland and West Virginia. Even through the diesel era, extra motive power was added at the head-end to take the train over these ridges, which meant extra stops on both sides of the mountain heights to add and remove assisting locomotives. Unfortunately, because the train traveled the B&O's lightly populated St. Louis main line serving towns in northern West Virginia and southern Ohio it never profited from high ridership. Still, the train lasted until the startup of Amtrak in 1971.

The National Limited was originally an all-Pullman train in the 1920's and 1930's. In addition to compartment and drawing-room sleeping cars, it featured a club car, observation library lounge car, and a full-service dining car. On board amenities for the deluxe train's clientele included a secretary, barber, valet, maid, manicure, and shower baths. On April 20, 1932, it became the first long-distance train to be entirely air conditioned. Connections with southwestern railroads, including the Missouri Pacific, Missouri-Kansas-Texas, Cotton Belt, and the Frisco, were made at St. Louis.

In 1939–1940, the National Limited was streamlined and dieselized. In the 1950's, coaches were added to the train's consist, and a Slumbercoach was first used on this train in 1959.

In 1947, westbound National Limited No. 1 departed Jersey City at 12:55 p.m. and arrived in St. Louis at noon the following day, covering the schedule in roughly 24 hours. The table at right indicates stops made (departure times at principal stops shown; yellow indicates transport by bus).

In 1940 the National Limited received refurbished streamlined heavyweight equipment, similar to what the Capitol Limited had received in 1938. The consist included coaches, sleeping cars in various configurations, a dining car, a buffet-lounge, and a buffet-lounge-observation car. In 1941 these cars were augmented by several lightweight 10-roomette 5-bedroom sleeping cars.

In January 1956 the B&O acquired three Rivers-series sleeper-buffet-lounge-observation cars originally built in 1939 by Pullman-Standard for the New York Central Railroad. These had previously served on the 20th Century Limited among other trains. Each car contained a compartment, drawing room, and two double bedrooms. In 1959 the B&O added three slumbercoaches to the National Limited's equipment pool: the Restland (No. 7702), Sleepland (No. 7703), and Thriftland (No. 7704).

Decline and end
The National Limited, in common with most name trains in the U.S. by the late 1950's, suffered steadily declining patronage as the traveling public abandoned trains in favor of airplanes and the automobile. The B&O gave up on competing with the Pennsylvania Railroad into New York, discontinuing all passenger service north of Baltimore on April 26, 1958. Thereafter, the National Limited operated between Baltimore and St. Louis as a through train until 1966, when Washington, D.C., became its eastern terminus (with a connecting B&O coach-only train between Washington and Baltimore).

In 1967, the United States Post Office dealt a heavy blow to the B&O, cancelling most of its lucrative Post Office contracts. Most of the train's route through West Virginia, southern Ohio, and south-central Indiana and Illinois was, and continues to be, sparsely populated. Few cities or towns existed along the line that could contribute additional revenue or passengers to the train. Between Cincinnati and St. Louis, the B&O St. Louis line was single-tracked, and it avoided most of the Midwest cities along the way. While branch lines ran to Columbus, Dayton, Louisville, Indianapolis, Springfield, and other cities and towns, the National Limited bypassed them all. This ultimately would seal the train's fate. The B&O's National Limited had its final run on April 30, 1971, when Amtrak took over most passenger routes in the United States but did not continue any B&O trains with the exception of the Capitol Limited for the portion of its route east of Pittsburgh.

Amtrak's National Limited
The National Limited name was subsequently used by Amtrak for a train from New York to Kansas City, Missouri, via Harrisburg, Pittsburgh, Columbus, Dayton, Indianapolis, and St. Louis. This Amtrak train did not use the B&O route, and was canceled on October 1, 1979. Amtrak's Shenandoah served the National Limited B&O route from Washington to Cincinnati via Cumberland, Maryland, and Parkersburg, West Virginia, from October 31, 1976, to September 30, 1981. 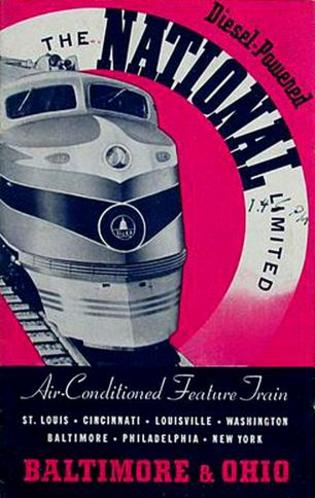 A National Limited Timetable Booklet, circa 1938.

The Baltimore and Ohio Railroad's National Limited observation car with drumhead at Washington, D.C.'s Union Station in 1961. The car is one of three acquired from the New York Central Railroad in 1956.   By James G. Howes, Attribution, https://commons.wikimedia.org/w/index.php?curid=8742118