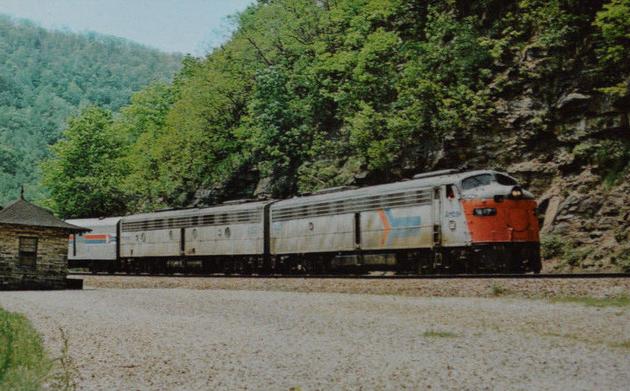 A postcard photo of Amtrak's National Limited at Horseshoe Curve in 1977.

The National Limited was a passenger train that ran between New York City and Kansas City, Missouri. Amtrak operated the train between 1971 and 1979.

In 1970, the Department of Transportation, in its designation of endpoints for the Amtrak system, designated a train to run between New York, Washington, D.C., and St. Louis. This was later amended to run all the way to Kansas City, with a connection to the Super Chief that would run between Chicago and Los Angeles. The route was being served, prior to Amtrak, by the Pennsylvania Railroad's Spirit of St. Louis. The Baltimore and Ohio Railroad also ran a train connecting New York and Washington with St. Louis. It was their train, known as the National Limited, that would eventually have the name Amtrak would use.

With Amtrak's birth in May 1971, they ran the Spirit of St. Louis, extending it to Kansas City. It soon lost the Spirit moniker, being replaced with the National Limited. The route had issues almost from the start. Although it should have been a financial success, going through a myriad of population centers, it frequently ran late (and sometimes not at all), owing to the deteriorated Penn Central trackage in Ohio, Indiana, and Illinois. For most of its existence the National Limited operated a Washington section. Until October 29, 1978, this section split at Harrisburg and reached Washington via the Port Road Branch. From that date until discontinuance the National Limited split at Philadelphia.

In 1979, the Carter administration, in its plan to cut Amtrak's budget, applied criteria on a cost/farebox ratio to every Amtrak train. Any train not making enough money would be dropped from the system. Unfortunately, the problem of Penn Central's track in the Midwest had led to a substantial decline in ridership on the National Limited. Although there were some protests by local politicians, the National Limited made its last run October 1, 1979.

The state of Missouri, not wanting to see service lost between St. Louis and Kansas City, stepped in on that part of the National's route, and introduced the Kansas City Mule and St. Louis Mule to provide service there; Amtrak now operates the Missouri River Runner between the two cities.