The Navajo name was also carried by a Santa Fe sleeper-lounge-observation car built by the Budd Company in 1937 for the Super Chief. The car is on display at the Colorado Railroad Museum.

The Navajo
The Navajo was one of the named passenger trains of the Atchison, Topeka and Santa Fe Railway. The economy train entered daily service between Chicago-Los Angeles-San Francisco as train Nos. 9 & 10 on October 1, 1915, as a replacement for the railroad's Tourist Flyer, and ran until January 14, 1940.

In the Summer of 1926 train No. 9 left Chicago at 09:45 and arrived in Los Angeles three days later at 07:30. It ran via Topeka, St John and Pasadena and carried no diner west of Kansas City, making three meal stops a day. In November 1939 it left Chicago at 01:35 and arrived in Los Angeles at 11:40, 60 hours by the same route except via Great Bend. (For several years earlier in the 1930s the westward train shifted to the Amarillo route, then both trains ran via Amarillo for a year or two before returning to the northern line.) 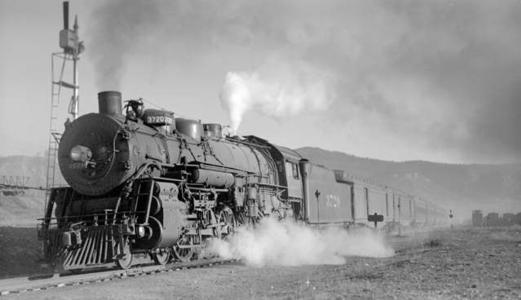 A map depicting the "Grand Canyon Route" of the Atchison, Topeka & Santa Fe Railway circa 1901.