Inaugurated on April 29, 1900, between St.Paul, Minnesota, and Puget Sound, the Northern Pacific's North Coast Limited started as a summer-only service but expanded to a year-round daily train in 1902. The North Coast Limited then ran as Number 1 westbound and Number 2 eastbound.

In 1909 the train received new heavyweight cars built by Pullman-Standard and added a Portland section which operated via the Spokane, Portland and Seattle Railway between Spokane, Washington and Portland, Oregon. The railroad began its through train service between Chicago and the Pacific Northwest on May 23, 1909, announcing it in newspaper ads.

On December 17, 1911 service was extended to Chicago over the Chicago and North Western Railway. In 1918 the route east of St Paul became the Mississippi River line of the Chicago, Burlington and Quincy Railroad, which ran to Chicago's Union Station instead of Northwestern Station.

In summer 1926 the schedule for 2,331 miles between Chicago and Seattle was 70 hr 25 min westward and 69 hr 55 min eastward. In June 1929 the fastest trains on NP, GN and the Milwaukee started running on a 63-hour westward schedule and 61-1/4 hours eastward, still with no extra fare.

On May 14, 1930 the North Coast Limited got new heavyweight steel cars. The new trains had brass windows, barber and valet services, a barber shop, separate bath and shower facilities for men and women, a soda fountain and radios on board. Parlor cars were added for the daylight portions of the run, so the train lost its all-Pullman status and never regained it. By 1937 most cars were air conditioned; in 1942 the lounge observation cars with open platforms were replaced by buffet solarium sleepers. By that time the train had added cheap tourist sleepers and coaches.

In 1946 the Northern Pacific board of directors authorized the purchase of new streamlined equipment for the railroad, beginning with the North Coast Limited. The new train began service in 1948; the crew included a stewardess who was a registered nurse.

In summer 1950 train 1 left Chicago at 23:00 CST and took 58 hr 30 min to Seattle; it was NP's only through train. In November 1952 it was sped up to match the competition, leaving Chicago at 11:30 and taking 46 hr 30 min to Seattle. The North Coast then became trains 25 and 26; numbers 1 and 2 were given to a secondary Chicago-Seattle train, the Mainstreeter, that took its name from the Northern Pacific advertising slogan "Main Street of the Northwest."

Until 1954 the North Coast was painted in the “Pine Tree” or "Streamline" scheme: grey roof, dark green letterboards, light green windowband and dark green lower sides with black trucks. The train's more famous two-tone green paint scheme which was added in 1954 and Lewis and Clark-themed interiors of the Traveller’s Rest Tavern car added in 1955 were designed by Raymond Loewy. The train now had a green roof, letterboards and windowband, a thin white line below the window band and pale mint green lower sides with black trucks; most car names were replaced with numbers.

In 1954 the Northern Pacific introduced the dome car to the consist and renamed their flagship train "The Vista-Dome North Coast Limited." There were two dome coaches and two dome sleepers (all built by Budd) in each train. The dome sleepers had four roomettes in the short end, four double bedrooms in the long end, and four single bedrooms underneath the dome. Each car had 24 unreserved seats in the dome upstairs. The Northern Pacific placed at least one flat-topped car between each dome car to give passengers the best view.

In 1967 the observation lounge cars were discontinued, but the sleeping car passengers could still enjoy lounge atmosphere in the dome sleepers, since below the dome two of the four single bedrooms were replaced with a buffet, and 24 lounge table seats were installed on the dome level, which made Northern Pacific advertise the rebuilt dome sleepers as “Lounge in the Sky.”

The scenic route went west across northern Illinois to the Mississippi River at Savanna, Illinois and then followed the Mississippi through La Crosse, Wisconsin, St. Paul, and Minneapolis in Minnesota as far as Little Falls, Minnesota. North Dakota cities served include Fargo, Bismarck, and Dickinson. Crossing Montana, the train passed through Glendive, Billings, Livingston, Bozeman, Butte, and Missoula. After passing though Sandpoint, the train made stops at Spokane, Pasco, Yakima, and East Auburn (a stop for connecting service to Tacoma) before terminating at King Street Station in Seattle.

Declining ridership and continuing red ink led the train to be jointly operated with the Great Northern's Empire Builder between Chicago and Minneapolis. By late 1967 the combination was joined by the Chicago, Burlington and Quincy's Twin Cities Zephyr. The eastbound North Coast Limited/Empire Builder was combined with the Morning Zephyr, while the westbound train combined with the Afternoon Zephyr.

The Burlington Northern Railroad was the March 1970 merger of NP, GN, CB&Q, and the SP&S, and the North Coast Limited ran combined with its former rival Empire Builder between Chicago and Minneapolis, between Spokane and Portland and between Spokane and Seattle. The original train ceased operation with the Amtrak takeover. The last train operated on April 30, 1971, seventy-one years and one day after the inaugural.

At Pasco, the Portland cars were switched onto SP&S Train 1, which also carried through equipment from Spokane to Portland from the Great Northern Railway’s Empire Builder. SP&S Train 1 carried a diner and lounge-sleeper, as well as the NP and GN cars.

The balance of the train continued as NP Train 25 from Pasco, WA over Stampede Pass into Seattle King Street Station.

Much of the route today is not served by passenger train, though Amtrak's Empire Builder does run on some of the same trackage in its St. Paul-Moorhead and Sandpoint-Pasco segments. Additionally, the route in Montana through Butte and over Homestake Pass has been inactive (intact, but without any trains) since 1983, as freight trains (now operated by Montana Rail Link) use the flatter and more direct route via Helena. The lone remaining Chicago to Seattle/Portland passenger train today is Amtrak's Empire Builder which primarily traverses much of the former Great Northern route west of St. Paul, Minnesota via Grand Forks and Minot, ND; Havre, Whitefish, and Glacier National Park in Montana; and Wenatchee and Everett in Washington State.

North Coast Limited
The North Coast Limited was a named passenger train operated by the Northern Pacific Railway between Chicago and Seattle via Bismarck, North Dakota. It started on April 29, 1900, was a Burlington Northern Railroad train after the merger on March 2, 1970 with Great Northern Railway and Chicago, Burlington and Quincy Railroad, and ceased operation the day before Amtrak began service (May 1, 1971). After 1918 the Chicago to St. Paul leg of the route was on the Chicago, Burlington and Quincy railroad along its Mississippi River line through Wisconsin. The train had a Portland section which split off the Seattle section at Pasco, Washington and ran over NP subsidiary Spokane, Portland and Seattle Railway between Pasco and Portland. For much of its history the North Coast Limited was noted for its dining car service. 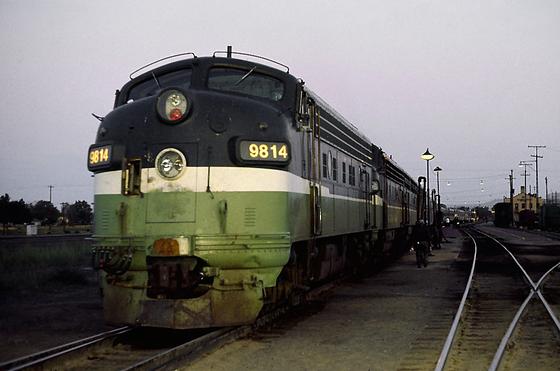 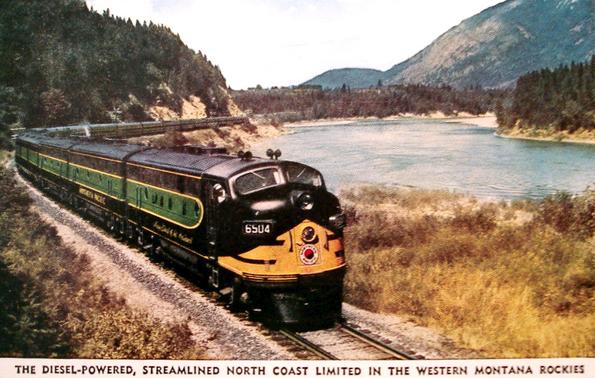