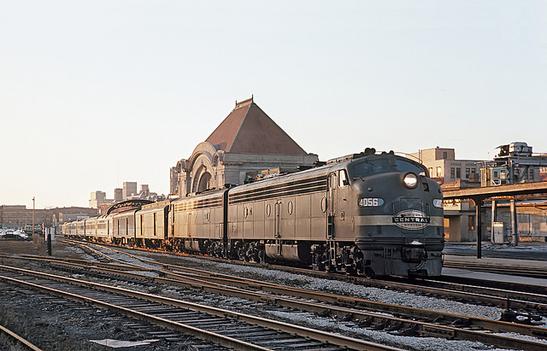 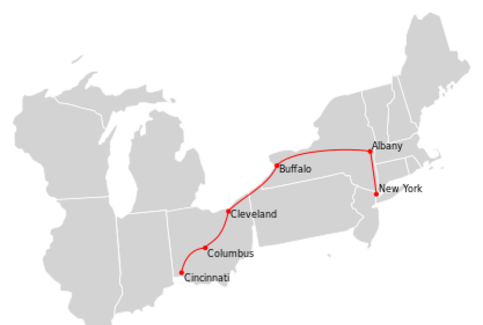 Ohio State Limited
The Ohio State Limited was a named passenger train operated by the New York Central Railroad (NYC) between New York City and Cincinnati, Ohio. Service began in 1924 and continued until 1967, with some vestiges remaining until 1971.

NYC began the Ohio State Limited on April 27, 1924. The new service departed Grand Central Terminal at 3 PM, just after the 20th Century Limited, with a scheduled arrival in Cincinnati of 9:30 AM the following morning. A section of the train split at Cleveland, Ohio to serve Toledo, Ohio, while the Boston & Albany Railroad exchanged through cars for Boston, Massachusetts at Albany, New York. The train used the Big Four route between Toledo and Cincinnati. In 1941 the Ohio State Limited began receiving lightweight streamlined equipment, becoming part of the NYC's famed "Great Steel Fleet." The train was fully re-equipped with lightweight equipment by 1949. Its chief postwar rival was the Pennsylvania Railroad's Cincinnati Limited.

In the late 1950's the Ohio State Limited was one of several NYC trains to receive the new sleepercoach economy sleeping cars in a failed attempt to revive flagging business. In the early 1960's the Ohio State Limited ran combined with the New York-St. Louis Southwestern Limited between New York-Cleveland as a cost-saving measure. The end came on December 2, 1967, when NYC eliminated all named trains in anticipation of a transition toward short-haul corridor services. The last remnant of the Ohio State Limited was a rump coach trip between Cleveland-Cincinnati, often running with a single car. This remained the case after the Penn Central merger and survived until Amtrak took over most passenger services on May 1, 1971, when it was discontinued.