On June 29, 1947 the Milwaukee Road inaugurated its streamlined flagship, the Olympian Hiawatha on a 43-hour, 30-minute schedule. The Milwaukee advertised the faster train as a "speedliner".

To meet new streamlined competition from the Northern Pacific and Great Northern the train was launched with streamlined and heavyweight equipment. The Milwaukee's insistence on its own radical designs also contributed to delays in delivery. The first streamlined coaches, Touralux open berth sleepers, dining and lounge cars were home-built by the Milwaukee's Menomonee Valley shops. By 1949 the remaining cars were delivered by Pullman-Standard. The former Olympian heavyweight consists for a time continued to run on the older Olympian schedule, once again named the Columbian.

Designed by industrial designer Brooks Stevens, the Olympian Hiawatha included the Milwaukee Road's signature Skytop solarium observation car. Similar to those built for the Twin Cities Hiawathas, the Olympian Hiawatha's Skytops had more glass area from the rear forward and sleeping compartments in the forward two-thirds of the car. The Milwaukee Road billed the Skytops as "the perfect ending for a perfect train".

The Skytop observation cars have been described as the most distinctive railway cars ever built. The Milwaukee Road ordered several pairs of Fairbanks-Morse diesels with an orange, maroon and stainless steel exterior by Stevens. The grill/lounge and dining cars had angled seating for more interior space and a better view. The stunning trains had the Milwaukee's orange and maroon livery and green and gold seating and carpets and wood veneer with stainless steel trim. Six complete train-sets were ordered; in 1952 the first full-length dome cars, called "super domes" were added. In 1957 the train was repainted into the Union Pacific Railroad’s Armour Yellow colors.

While the Milwaukee Road promoted the Olympian Hiawatha and its scenic route through Idaho and Montana's Bitterroot Mountains and the Cascade range in Washington, the railroad competed with the Great Northern Railway's Empire Builder, the Northern Pacific Railway's North Coast Limited and the growing airlines. The Olympian Hiawatha was never a financial success. On May 22, 1961 the train was discontinued, one of the first of the great name trains to end service.

In 1955 the Milwaukee Road assumed operation of the Overland Route "Cities" trains between Chicago and Omaha. The Milwaukee Road continued to serve the Pacific northwest through its shared passenger services with the Union Pacific Railroad, particularly the City of Portland. Between 1955 and 1957 the Milwaukee briefly marketed a City of Portland - Olympian Hiawatha “circuit route” at a reduced price with some success but the package was eventually discontinued.

Following the discontinuance of the Olympian Hiawatha much of its equipment was reassigned to the Milwaukee Road-Union Pacific Cities trains. The six sleeper-Skytop observation cars and six of the Milwaukee Road's "Super Domes" briefly saw service on these trains. In 1962 they were sold to the Canadian National Railway where they were placed in service on the Montreal to Halifax trains and the Toronto-Vancouver Super Continental. They were finally retired in 1971.

With the discontinuance of the Olympian Hiawatha in 1961, trains No. 15 and 16 continued to operate as an unnamed passenger train between Minneapolis and Deer Lodge, Montana with coaches, a Touralux open-berth sleeper and cafe car. In 1964 it was cut back to a coach-only train to Aberdeen, South Dakota, discontinued in 1969.

Legacy
Between 1971 and 1979 Amtrak operated the North Coast Hiawatha, a thrice-weekly train that used the Milwaukee's Chicago-Milwaukee-Minneapolis mainline and the Northern Pacific route west of Minneapolis. The trains name was an amalgam of North Coast Limited and Olympian Hiawatha.

Deferred maintenance forced the Milwaukee Road to abandon its electrification in 1974. Facing bankruptcy, the Milwaukee Road abandoned its "Puget Sound extension" in 1980, eliminating much of the route of the Olympian Hiawatha. Several sections of the route are now part of the National Forest and state rails-to-trails programs including the most scenic section through the Bitterroot Mountains.

History
Heavyweight Olympian
In 1909 the Milwaukee Road opened the "Puget Sound extension" from South Dakota to Seattle and Tacoma, completing the last line from Chicago to the coast. The Milwaukee Road ordered cars for two new all-steel luxury trains to run Chicago-Milwaukee-St. Paul-Seattle-Tacoma. The two new trains debuted on May 28, 1911. They were the first all-steel trains to operate in the Pacific Northwest. The Milwaukee Road named the two trains the Olympian and Columbian. The Olympian took 72 hours between Chicago and Seattle, necessitating seven sets of equipment to cover the service. Starting in 1914 the Olympian used the route of the Union Pacific Railroad to serve Spokane, Washington.

In 1915 the Milwaukee completed its first electrified section of rail line, from Harlowton to Deer Lodge, Montana, a feat that was advertised to passengers since electrification eliminated the soot normally associated with steam-powered rail travel prior to the era of air-conditioning. Extensions in the 1910s and 1920s resulted in 649 miles of electrified main line, in Montana/Idaho and over the Cascades in Washington. The 440 miles of electrified line between Harlowton, Montana and Avery, Idaho was the longest continuous electrified rail line in the world.

In 1926 the Olympian was scheduled to run from Chicago to Seattle in 70 hours. That year Milwaukee contracted with Pullman-Standard for new cars and the train was re-equipped, the new trains making their first runs in August, 1927. The steel cars were painted orange and maroon and were among the first to carry broadcast radio receivers. The Olympian was the first western transcontinental train to be equipped throughout with roller-bearings. Capitalizing on its soot-free electrification, the train carried open gondola cars during the summer. To increase ridership the Milwaukee Road opened its first railroad-owned hotel near Yellowstone National Park, the Gallatin Gateway Inn. Gallatin Gateway was reached from a spur that reached the main line at Three Forks, Montana, and prior to the Great Depression the Olympian carried through sleepers for it.

Both the Olympian and Columbian operated into 1930, but as ridership fell during the depression the Columbian was dropped, ending in 1931. The Olympian received air-conditioned cars in 1934-1935. The Olympian received additional equipment in 1937, including new Pullman cars and dining cars based on the highly successful Hiawatha streamliners then operating between Chicago and the Twin Cities. Between December 1943 and May 1947 the sleeping and coach portions of the Olympian operated in separate sections. 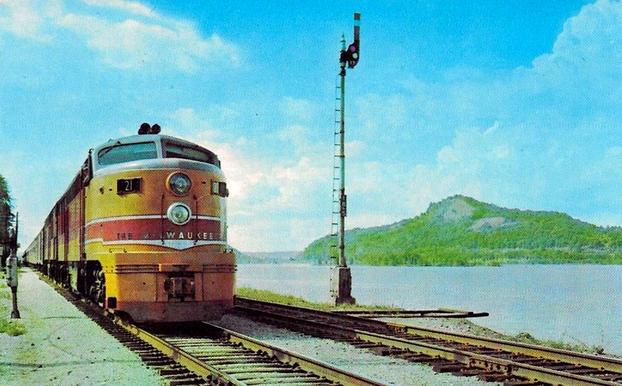 The Milwaukee Road's beautiful "Olympian Hiawatha" streamliner between Chicago and Seattle, circa 1949.