The heavyweight version of the  Orange Blossom Special, circa 1930. 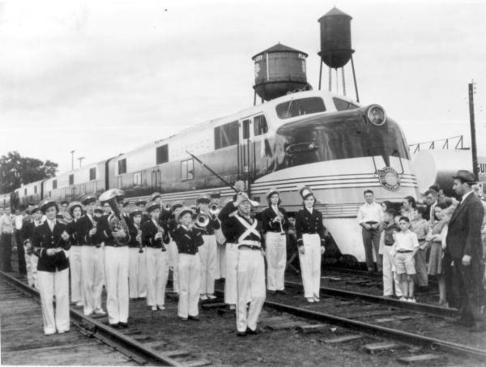 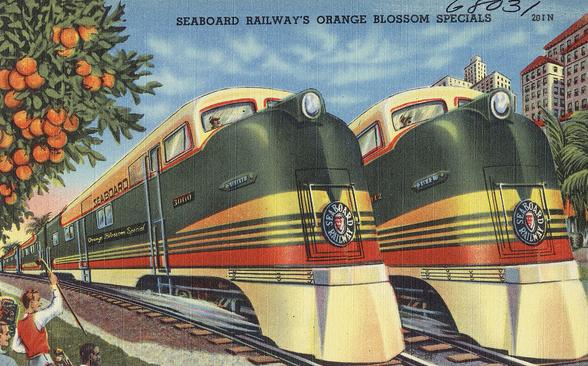 The Orange Blossom Special
The Orange Blossom Special was a deluxe passenger train on the Seaboard Air Line Railroad and connecting railroads between New York City and Miami in the United States. It ran during the winter season only and covered 1,327 miles on the Pennsylvania Railroad from New York City to Washington, D.C., the Richmond, Fredericksburg and Potomac Railroad from Washington to Richmond, and the Seaboard Air Line Railroad from Richmond via Raleigh, Columbia, and Savannah to Miami. A section also went to Tampa and St. Petersburg.

The train started on November 21, 1925 and was the brainchild of SAL president S. Davies Warfield, who wanted to capitalize on booming development in Florida at the time. Warfield believed Florida was a land of opportunity, and with fast, luxurious trains he could lure influential (not to mention wealthy) business leaders to the Sunshine State. In February 1926 the train took 35 hours to run from New York to West Palm Beach (Seaboard track did not reach Miami until 1927). 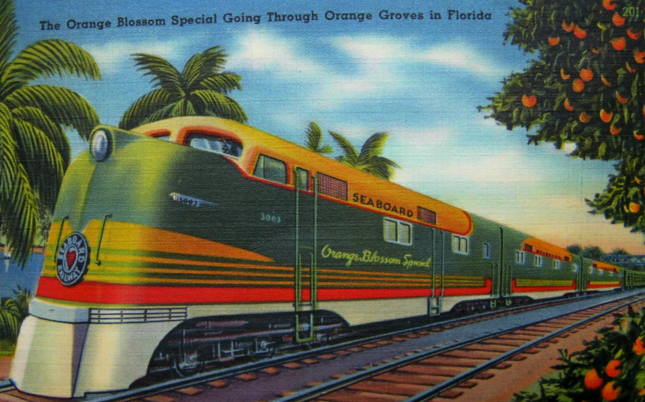 The service was suspended during World War II to free the equipment up for carrying troops. Its last run was in 1953. This market is now handled by Amtrak's Silver Star.

In early 2012, a similar locomotive painted to resemble a locomotive of the time, and lettered Orange Blossom Special was moved in from its long-time display location at the Church Street Station in Orlando, Florida to the Gulf Coast Railway Museum in nearby Tampa. Plans are for a multi-year restoration to active status for eventual excursion service.

The train and the song

It happened during the maiden run of the new streamlined train at the Jacksonville Seaboard Railroad Station that Ervin T. Rouse and Robert Russell "Chubby" Wise saw this train. Rouse and Wise wrote the "Orange Blossom Special" song as a fiddle tune. The tune was first recorded by Ervin and his brother Gordon one year later in New York. Bill Monroe recorded Rouse's and Wise's tune in 1942 (with Art Wooten on fiddle) and popularized the tune. Johnny Cash named his 1965 album after the song. The song was also recorded by Bill Ramsey and Don Paulin. This popular tale explains the fascination which led Ervin Rouse and Robert "Chubby" Wise to write the now famous fiddle tune. However, historically the Blossom was never "streamlined" and used Pullman heavyweight sleepers, diners, and some coaches of the winter Tampa run. The Blossom may have used some lightweight cars sporadically in mixed consist with the Pennsylvania Railroad which hauled the Blossom in the Northeast Corridor. If Rouse and Wise did see a streamlined Seaboard train in 1938, it was most likely the "Silver Meteor" which was streamlined with its stainless steel coaches. The name of this train was chosen by a public contest. The Seaboard's lightweight trains later became known as the Silver Fleet. This included the Silver Meteor, the Silver Star and the Silver Comet. The train did receive modern EMC E4 diesel locomotives in 1938, but continued using heavyweight Pullmans and American Flyer coaches until its demise in 1953. It is also possible the songwriters saw one of the Twin Cities Zephyrs at the Jacksonville railroad station in 1935. The Chicago, Burlington and Quincy Railroad brought the train to Florida at the invitation of the Seaboard Railroad. It toured the state, making stops in both east and west coast Florida cities, where the public was able to both view and tour the Zephyr; Jacksonville was one of the stops on its Florida tour. 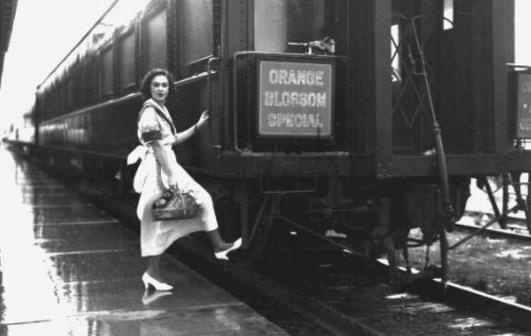 Spurred by the success of Henry Flagler and his rival Florida East Coast Railway in attracting travelers, the Orange Blossom Special became famous in its own right. It was renowned for its speed and luxury. E. M. Frimbo, "The World's Greatest Railway Buff", offered this account of a dining car chef who had worked aboard the train:

“ Our chef...spent nine of his forty-three years with the Pennsylvania Railroad as chef on the celebrated all-Pullman New York-to-Florida train the Orange Blossom Special—the most luxurious winter-season train ever devised by man. Nothing even remotely resembling a can opener was allowed on the premises. All the pies, cakes, rolls, birthday cakes were baked on board under his supervision. Cut flowers and fresh fish were taken on at every re-victualing stop, and the train carried thirty-five hundred dollars' worth of wine, liquor and champagne—these at pre-Prohibition prices—for each run. ”

Arrival of the Orange Blossom Special train at Plant City, Florida, the first diesel-powered passenger train in the Southeast, December 1938.

​By Florida Memory [No restrictions or Public domain], via Wikimedia Commons

A postcard depicting the train circa 1939; the card describes the train as the only all-electric New York-Florida train.