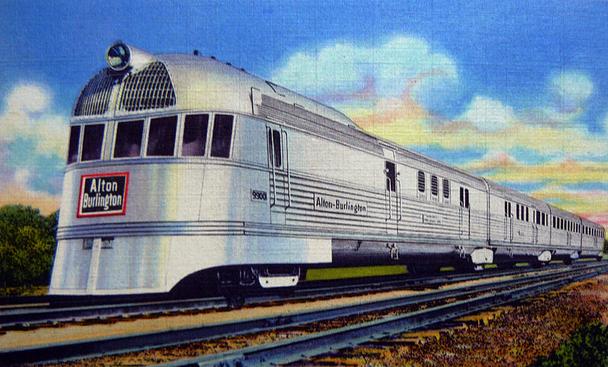 Ozark State Zephyr
The Ozark State Zephyr was a streamlined passenger train operated by the Chicago, Burlington and Quincy Railroad (CB&Q) and the Alton Railroad (the "Alton") between St. Louis and Kansas City in Missouri, home of the Ozarks. It operated from 1936 to 1939. The Zephyr was one of several short-haul Midwestern routes operated by the CB&Q's then-revolutionary articulated streamlined trainsets, including one of the original Twin Cities Zephyrs.

History
The Ozark State Zephyr, along with the Sam Houston Zephyr, was made possible by the re-equipping of the Twin Cities Zephyrs in 1936, which freed up the original two equipment sets, No. 9901 and No. 9902. The train made a single round-trip per day, departing St. Louis for Kansas City in the morning and returning in the evening. It covered the 279 miles in 5-1/2 hours. The new service was christened by Mollie Stark, daughter of Governor-elect Lloyd C. Stark, who rode the new train from St. Louis to Kansas City prior to it entering revenue service.

The CB&Q and Alton increased the service to twice-daily in September 1938 with the addition of equipment set No. 9903, the Mark Twain Zephyr, which was renamed to match existing service. Contemporary advertising referred to the "Morning" and "Afternoon" Ozark State Zephyrs, mirroring the practice already adopted by the CB&Q with the Twin Cities Zephyrs. The new train operated on a reverse schedule, departing Kansas City in the morning and returning in the evening.

The CB&Q and Alton retired the Ozark State Zephyr name on April 30, 1939, with the arrival of the brand-new General Pershing Zephyr trainset. This set assumed the morning Kansas City–St. Louis round-trip, while the Mark Twain Zephyr, its original name restored, handled the morning trip from St. Louis.