Interior view of the Pan American's dining car, circa 1930's.

Postcard depiction of the Pan American, circa 1920's.

Like many L&N trains the Pan-American experienced a surge in ridership during World War II, carrying four times its normal traffic. The Pan-American lost its title as the L&N's flagship train in 1946 with the introduction of faster Humming Bird over the same route. Although never fully streamlined, the Pan-American began receiving streamlined equipment in 1949. The southbound Pan-American carried through sleepers for Nashville, Tennessee, Louisville, Kentucky and Memphis from New York City conveyed by the Pennsylvania Railroad in Cincinnati. Further south in Montgomery, Alabama it received New York-New Orleans and Washington-New Orleans sleepers from the Southern Railway's Piedmont Limited. In 1953 the Pan-American was one of several L&N trains to receive new lightweight "Pine"-series sleeping cars from Pullman-Standard. Throughout the 1960s the decline of passenger railroading in the United States took its toll. A counter-lounge replaced the diner-lounge in 1965. The Pan-American began handling some of the South Wind's through traffic in 1970 after the Penn Central withdrew from joint operation. By 1970 the train's consist had shrunk dramatically: between Cincinnati and Louisville it might carry a baggage car, coach, and dining car, with a sleeper for New Orleans added in Louisville. Amtrak did not retain service over the L&N route and the Pan-American ended on April 30, 1971.

Postcard depiction of the Pan-American passing the WSM transmitter in Nashville. 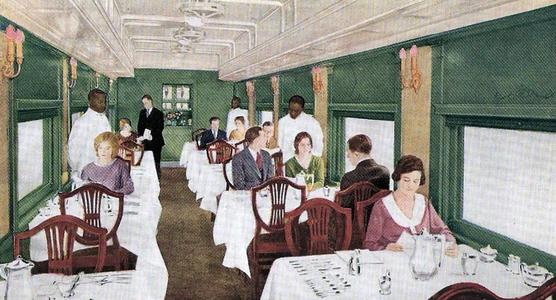 In the words of Kincaid Herr, official historian of the L&N, the Pan-American "came to be the symbol of the L&N's passenger service." The train was made famous by WSM Radio's nightly broadcast of the passing train's whistle. Some Pan-American passengers were lucky enough to sit in comfortable lounge chairs and hear the sound of their own train's whistle from a wood-cabinet table radio tuned to WSM in the observation car. The broadcasts began on August 15, 1933.

"Pan-American Blues" was one of two "railroad" songs recorded by DeFord Bailey (the other being "Dixie Flyer Blues", so-named for a train of the Chicago and Eastern Illinois Railroad). Bailey saw the Pan-American frequently at Nashville's Union Station in the 1920s, but the inspiration for name came from one of his foster sisters, who noted that "it was the fastest around." Bailey, with his harmonica, imitated the sound of the Pan-American's whistle and it quickly became one of his most-requested performances at the Grand Ole Opry and elsewhere. 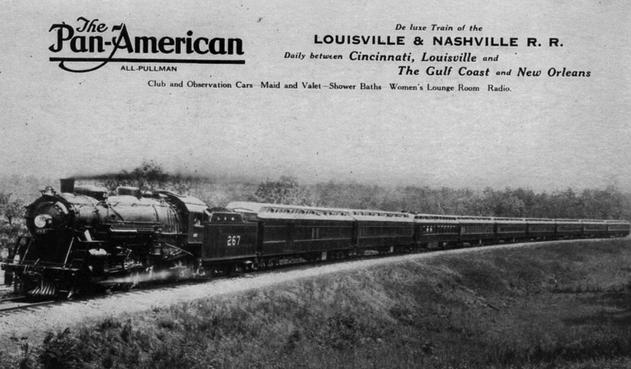 The Pan-American
The Pan-American was a passenger train operated by the Louisville and Nashville Railroad (L&N) between Cincinnati, Ohio and New Orleans, Louisiana. It operated from 1921 until 1971. From 1921 to 1965 a section served Memphis, Tennessee via Bowling Green, Kentucky. The Pan-American was the L&N's flagship train until the introduction of the Humming Bird in 1946. Its name honored the substantial traffic the L&N carried to and from the seaports on the Gulf of Mexico. The Pan-American was one of many trains discontinued when Amtrak began operations in 1971.

History
The L&N introduced the Pan-American on December 5, 1921. A section of the train diverged at Bowling Green, Kentucky to serve Memphis, Tennessee. At the outset the train carried both sleepers and coaches, and was noteworthy for its all-steel construction in an era when wood heavyweight coaches were still common. The name honored the substantial traffic the L&N carried to and from the seaports on the Gulf of Mexico. It covered the 921 miles from Cincinnati to New Orleans in 26 hours, soon shortened to exactly 24 hours. The train proved popular with the traveling public, and in 1925 was re-equipped as an "All-Pullman" (no coaches) train. The economic pressures of the Great Depression forced the Pan-American to start carrying coaches again in 1933. 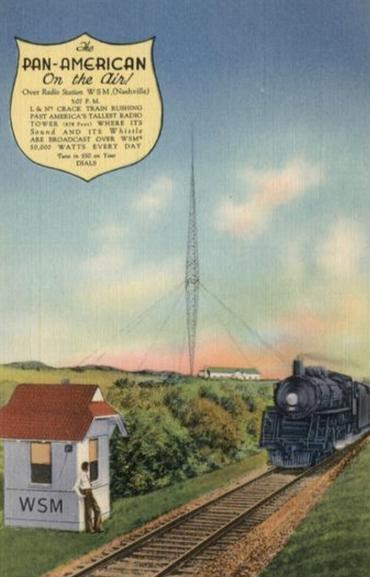