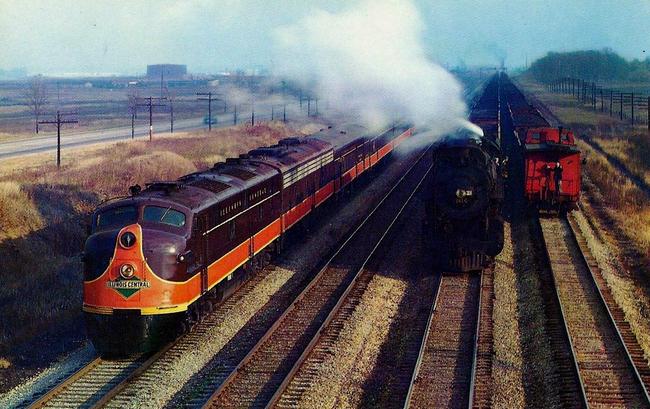 The Panama Limited was streamlined in 1942, during World War II. The Illinois Central had ordered two lightweight sets of equipment prior to the attack on Pearl Harbor; after an appeal the War Production Board allowed their delivery. The first diesel/electric-powered streamlined run of the Panama Limited was on May 3, 1942 on an 18-hour schedule. On hand for the first run was Janie Jones, the widow of famed engineer Casey Jones. The Panama Limited carried a new orange-and-chocolate brown paint scheme which later became standard on Illinois Central passenger trains. For the duration of the War the Illinois Central dropped the extra fare. In June 1946 the schedule dropped to 17 hours; later the schedule was reduced to 16 hours, 30 minutes again with the extra fare.

The Panama Limited maintained a high level of service until the Amtrak era. It was noted for its dining car service, with a first rate culinary staff and Creole fare in the Vieux Carre-themed dining cars, a service which the Illinois Central marketed heavily. A well-known multi-course meal on the Panama Limited was the 'Kings Dinner', on the menu for about $10 (other deluxe, complete meals such as steak or lobster, including wine or cocktail, were priced around $4–$5). In 1952 the Illinois Central acquired several 2-unit 175-foot dining cars from the Chesapeake & Ohio Railroad which it used on the Panama. With the Pennsylvania's Broadway Limited it was one of the last two "all-Pullman" trains in the United States.