The Pelican
The Pelican was a named train of the Southern Railway which ran from New York City to New Orleans and back until 1970.

Operations
The Pelican (Train No. 41 and No. 42) departed New York's Pennsylvania Station going south via the Pennsylvania Railroad to Washington, DC, then on Southern's line to Lynchburg, Virginia, then to Bristol, Virginia via the Norfolk and Western Railroad with a major stop in Roanoke, Virginia. From Bristol to New Orleans, the Pelican ran on Southern's line with major station stops in Knoxville, Tennessee, Chattanooga, Tennessee, Birmingham, Alabama and Meridian, Mississippi.

History
With passenger traffic declining, the Pelican was combined with the Birmingham Special in 1970. 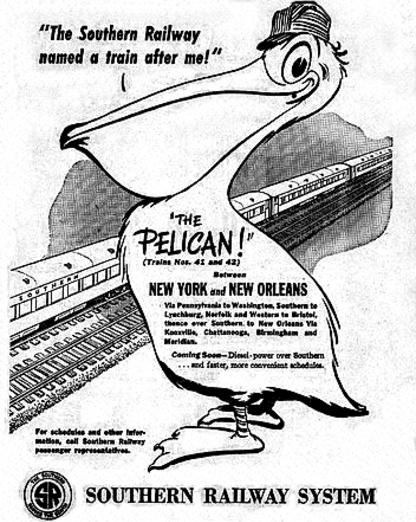