The Phoebe Snow
Phoebe Snow was a named passenger train which was once operated by the Delaware, Lackawanna and Western Railroad (DL&W) and, after a brief hiatus, the Erie Lackawanna Railway (EL).

Around 1900, DL&W launched a marketing campaign around the fictional character of Phoebe Snow to emphasize how the exhaust from its steam locomotives was cleaner than competitors' locomotives, as a result of using anthracite coal. The train took its name from the character.

Its route traveled across New Jersey, passing over the Paulinskill Viaduct and the Delaware River Viaduct of the Lackawanna Cut-off; Pennsylvania, passing over the Tunkhannock Viaduct; and the Southern Tier of New York.
The train operated for a few decades, before it was suspended.

On November 15, 1949, the DL&W inaugurated a new streamlined passenger train named after its long-dormant promotional symbol. Launched by DL&W president William White, the new Phoebe Snow represented the DL&W's modernization of its passenger train fleet, and image, as it became Train No. 3 (westbound) and No. 6 (eastbound), which previously had been assigned the railroad's former premier train, the Lackawanna Limited. The Phoebe Snow ran on a daylight schedule between Hoboken, New Jersey, and Buffalo, New York, making the 396-mile trip in about eight hours. Westbound, the sleepers and some coaches would continue on to Chicago, Illinois, over the Nickel Plate Railroad's Nickel Plate Limited and, on return, would be attached in Buffalo to Train No. 10, the New York Mail.

The train's reclining seat coaches were taken from a pool of 26 cars split between builders Pullman-Standard and American Car & Foundry (ACF). The dining cars and tavern-lounge-observation cars for the two Phoebe Snow consists were built by the Budd Company, while the through sleeping car in each consist was taken from a pool of nine 10-roomette, 6-double bedroom cars built for the Lackawanna by ACF. Motive power was provided initially by an A-B-A set of passenger-equipped EMD F3 diesels, but their steam generators provided insufficient heat to the train in winter, and were supplanted by a pair of EMD E8A diesel-electric locomotives.

In 1958, as part of the consolidation of operations between the Erie and DL&W railroads — the roads would merge formally in 1960 to form the EL — DL&W's mainline between Binghamton and Corning, New York, was severed and all trains traveling between those points were rerouted over the Erie mainline. Between April 29 and July 1, 1962, all passenger trains between Corning and Buffalo were re-routed off the DL&W mainline over Dansville Hill to the former Erie mainline via Hornell, New York, a route that was four miles longer than the old one, and which added an hour to the scheduled time.

After the EL merger, the Phoebe Snow continued to run as No. 3. However, since the signature Tavern-Lounge cars (observation cars), with the Phoebe Snow drumheads on their tail ends, were so closely identified with the train, when these cars were taken off the train and placed into storage shortly after the merger, many observers were led believe that the train had been discontinued. This was not true. The train continued to run, albeit without the cars that arguably defined it and with a new name - Erie-Lackawanna Limited (a merger renaming of the Erie Limited). Reportedly the cars had been placed into storage, in the unused Erie shop facilities at Susquehanna, Pennsylvania, because they were deemed a nuisance as they had to be turned on a turntable or a wye at the end of each trip. An alternative explanation for the discontinuation of the cars was that the Erie management resented the symbol of the DL&W playing such a prominent a role in the EL passenger train operation and sought to dispose of it wherever they could. However, it was equally true that the observation cars' bar facilities lacked the ability to provide proper food service, unlike the EL's dining-lounge cars which could serve both meals and beverages as well as provide distinct seating for each type of service. 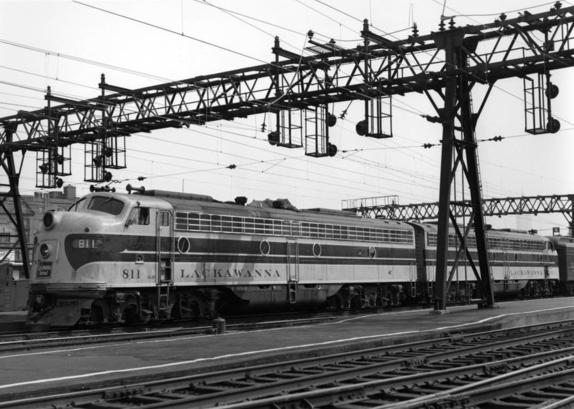 Whatever the reason, the observation cars were restored after William White was appointed EL president on June 18, 1963. The originator of the Phoebe Snow ordered the train "reborn" as train No. 1, replacing the short-lived Erie-Lackawanna Limited. White was looking for a way to boost both EL employee morale and to gain some positive publicity for the foundering railroad; the move accomplished both. However, since a Hoboken-Chicago routing was chosen, which bypassed Buffalo, the train was put in direct competition with the New York Central Railroad's passenger operation. In an earlier time, the new train might have flourished, but with the steadily declining image of passenger rail travel in the U.S. in general, and competition from airlines in particular, it was doomed from the start.

On November 27, 1966, the EL terminated the Phoebe Snow for good, leaving the Lake Cities as the EL's last long haul passenger train using Phoebe Snow diner cars and sleeper service, a service that ran until the Lake Cities also was discontinued on January 5-6, 1970. The trademark tavern Lounge cars were placed in storage again after the final run, although they appeared occasionally at the rear of special trains until sold off.

The EL discontinued its last long-distance passenger train, Lake Cities, on January 6, 1970, about 16 months before Amtrak took over most U.S. passenger train operations. Amtrak might have taken over the Hoboken-Chicago operation, but observers speculated that the EL wanted to rid itself of its passenger trains before that could happen.

On November 13, 1979, three years after Conrail assumed operation of the former EL lines, Amtrak operated an inspection train over the former route of the Phoebe Snow between Hoboken and Scranton to determine the feasibility of restoring rail service between the two cities, and to try to prevent the abandonment of the Lackawanna Cut-Off. Dubbed the Pocono Day Express, it was the last passenger train to run over the route of Phoebe Snow in the twentieth century.

Amtrak was facing budget cuts that threatened numerous routes across the country at that time, however. The addition of a new route, one which had not seen a passenger train in nearly a decade, was a low priority.