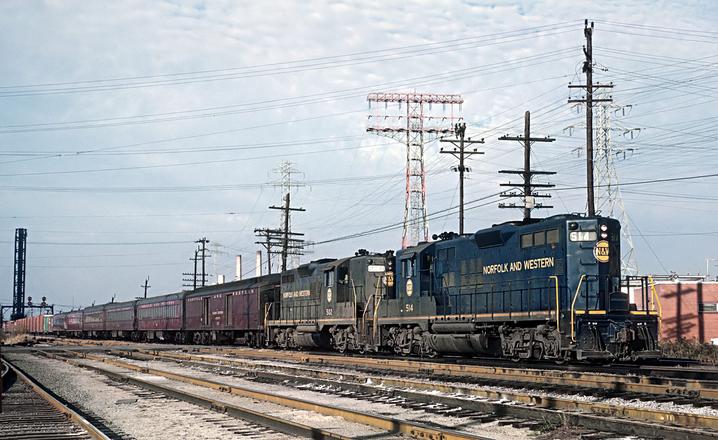 In April, 1946, the N&W ordered sufficient passenger cars to re-equip The Pocohontas partially and The Powhattan Arrow completely. The new cars for The Pocahontas included ten 56-seat coaches (P3 class Nos. 531–540), two 36-seat dining cars (D1 class, No. 493 General William Mahone and No. 494 Frederick J. Kimball), three 10-roomette 6-double bedroom cars from Pullman-Standard (S2 class), and twenty similar cars from Budd (S1 class). Some of the P3 and two more D1 cars (Nos. 491–492) were for the The Powhatan Arrow; and the sleeping cars, which were all named after colleges and counties in Virginia, were used on all N&W sleeping car lines.

The cars were delivered in 1949. They were smooth-sided and delivered in Tuscan Red & Black; even the stainless steel Budd cars were painted and they lacked the usual fluted sides. Of the ten P3 cars, 8 may still be in some type of operation. Several of these cars were used in the Norfolk Southern Steam Program. The N&W streamlined/lightweight trains were originally painted as follows: sides, ends and skirts ("Tuscan Red"), roofs ("Dark Brown"), with Trucks ("Pullman Green") and lettering/striping ("Gold Leaf").

Around the early 1950s the lettering/striping was changed to imitation gold. The roofs when repainted in the 1950's changed to black as were the trucks. The heavyweights were painted the same but did not carry train name logos or striping. N&W "officially" adopted blue at the end of 1965. The repaints were not all done right away. May 1, 1971, marked the final run for N&W train No. 4, the Pocahontas; it was also N&W's last regularly scheduled-passenger train.

The Pocahontas
The Pocahontas was one of the named passenger trains of the Norfolk and Western Railway. Its route ran from Norfolk, Virginia to Cincinnati, Ohio.

The train carried two 10-roomette 6-double bedroom sleeping cars from Norfolk to Cincinnati, one of which went though to Chicago on Pennsylvania Railroad Train 71. The train also handled a Winston-Salem to Columbus 10-6 sleeping car line that was carried in train 12 from Winston-Salem to Roanoke, train 3 from Roanoke to Portsmouth, and train 33 from Portsmouth to Columbus. All these lines had counterparts operating in the opposite direction.

The most famous power of the N&W were the "J"s. They were the pride of the N&W, pulling crack passenger trains such as The Cavalier, The Powhatan Arrow, and The Pocahontas, as well as ferrying the Southern Railway's Tennessean between Lynchburg, Virginia and Bristol, Virginia. One test proved that a "J" could pull fifteen cars at 100 mph along one section of flat, straight track in eastern Virginia. The only unit left of this class is Norfolk & Western 611.