In 1941, the “Portland Rose took on a “Challenger” section with meal prices of 35 cents for breakfast, 40 cents for lunch, and 50 cents for dinner. The entire train was air-conditioned, but the luxury accommodations were found on the streamliner “City of Portland” and the “Portland Rose”. This second section ran 10 minutes behind and combined with the “Portland Rose” at Green River, Wyoming, to finish the trip to Portland. When the streamliner “City of Portland” began daily operation on February 15, 1947, the Portland rose was re-routed to run between Denver and Portland. On January 10, 1954, service was extended to Kansas City, Missouri, replacing “Pony Express” trains between Kansas City and Denver. Portland Rose service ended May 1, 1971. 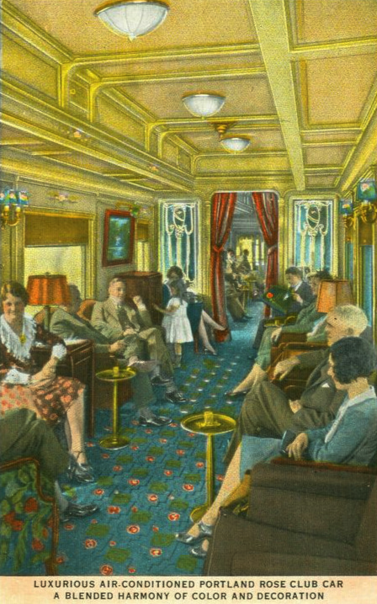 Postcard depiction of the club car on the Union Pacific Portland Rose. 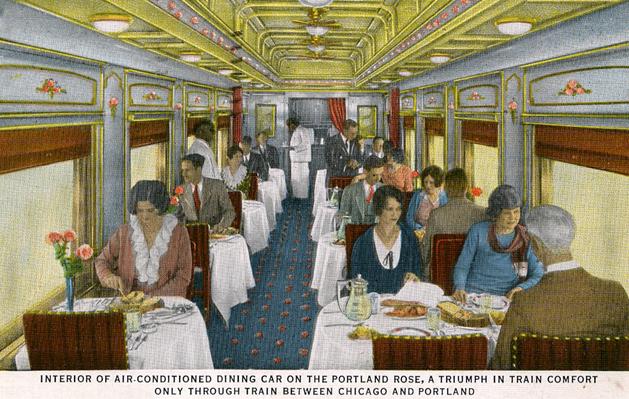 Postcard depiction of the dining car on the Union Pacific Portland Rose.

The Portand Rose was a Union Pacific passenger train. The Union Pacific's Portland Rose began service between Chicago and Portland, Oregon, on September 12, 1930. The “Portland Rose” was heralded as “a triumph in train Comfort,” with its own china pattern and specially decorated club observation car, the Portland Club. This car featured a radio, soda fountain, maid service, hairdresser, barber, valet and bath. The rose was the decorative motif for this train. The soft, deep pink of “Madame Caroline Testout,” the official rose of Portland, was the prevailing color. Through the Columbia River Gorge, between the Dalles and Portland, an open top observation car was added on the rear of the train.