The Prairie Marksman at East Peoria in August 1981.Photo by Hikki Nagasaki. 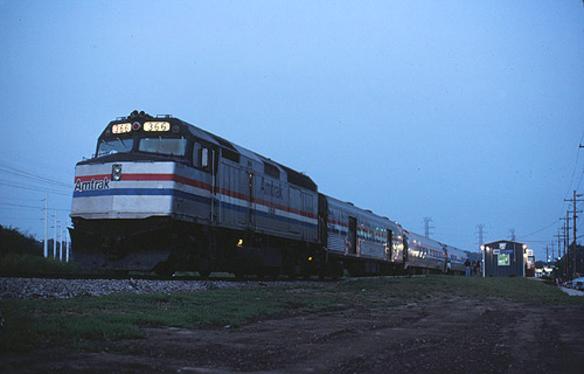 Prairie Marksman
The Prairie Marksman was a daily passenger train operated by Amtrak between Chicago's Union Station and East Peoria, Illinois. The route was an indirect successor to the Rock Island's Peoria Rocket.

History
Prior to the creation of Amtrak Peoria was served by the Rock Island's Peoria Rocket. Then in serious financial distress, the Rock Island opted out of Amtrak in 1971 when the company decided it was cheaper to keep running its remaining passenger trains than to join Amtrak. The Peoria Rocket and the Quad Cities Rocket continued running until December 31, 1978, providing one round-trip each day between Chicago's LaSalle Street Station and both Peoria and Rock Island, Illinois via Joliet, Illinois. With the demise of the Rock Island Peoria's nearest railroad connection was at Chillicothe, Illinois, 20 miles (32 km) to the north, where Amtrak's Lone Star (Chicago-Kansas City-Houston) stopped daily. The Lone Star, however, fell victim to budget cuts and was discontinued in October 1979.

The Prairie Marksman began on August 10, 1980, as a joint venture between Amtrak and the state of Illinois. Eschewing the Rock Island route, the Prairie Marksman used the old GM&O line between Chicago and Chenoa, Illinois, and then traveled west over the Toledo, Peoria & Western to East Peoria. The name was derived from a TP&W freight train which once operated over that route between Webster, Illinois and Keokuk, Iowa.

The Prairie Marksman ended on October 4, 1981, after Illinois withdrew its support for the train. The train carried an average of 65 passengers per day, well below the 150 needed to justify a continuation.

Amtrak, at the request of the Illinois Department of Transportation, conducted a feasibility study for restoring service to Peoria which was published in September 2011. This study recommended a "rail shuttle" to Normal, Illinois which would connect with the Lincoln Service. Like the Prairie Marksman this shuttle would stop in East Peoria and not Peoria proper: the railroad bridge over the Illinois River is of the moveable span type and opens 10–20 times over the course of a day. The shuttle would use the Norfolk Southern Railway to reach Normal. Amtrak estimated start-up costs at $106 million, mostly for a new connecting track in Normal which would permit the trains to bypass a Union Pacific Railroad yard there.