The Rebel
The Gulf, Mobile and Northern Railroad Rebels were lightweight, streamlined Diesel-electric trains built by American Car and Foundry. The first two trains, purchased in 1935, provided service between New Orleans, Louisiana and Jackson, Tennessee. The third train, purchased in 1937, allowed service to be added between Jackson, Tennessee, and Mobile, Alabama. Unlike other earlier Diesel streamliners, these trains were not articulated, as their normal operation required adding and removing cars from the consist.

Gulf Mobile and Northern Rebels
The trains were powered by lightweight, shovel-nosed power cars, styled by Otto Kuhler, and equipped with 600 hp, six-cylinder Alco Diesel 531 prime movers and Westinghouse electric transmission components. The units had an uncommon 2-B wheel arrangement, mounted atop a pair of road trucks. The aft section was divided into two separate compartments: one was used to transport baggage and the other served as a small railway post office, or RPO (the forward door, located just behind the radiator louvers, was equipped with a mail hook).

The Gulf, Mobile and Northern's "Rebel". 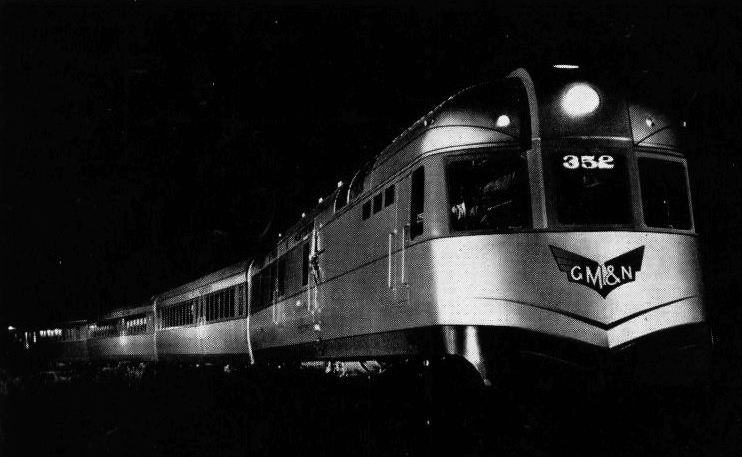 Two of these power cars were purchased as part of the 1935 order, along with three buffet-coach cars, and two sleeper-observation cars. Normal operating procedure was for a northbound train to leave New Orleans with two coaches and an observation car. Due to lower ridership on the northern portion of the route, one of the 2 coaches would be removed from the northbound train at Jackson, Mississippi, and the train would continue on to Jackson, Tennessee as a 3 car consist. The southbound train would add the extra coach during its own stop at Jackson, Mississippi.

While the original Rebel served New Orleans and Jackson, after the merger of the GM&N and Mobile and Ohio to created the Gulf, Mobile and Ohio Railroad in 1942, the trains route was extended to St. Louis. The powercars were scrapped in 1962.