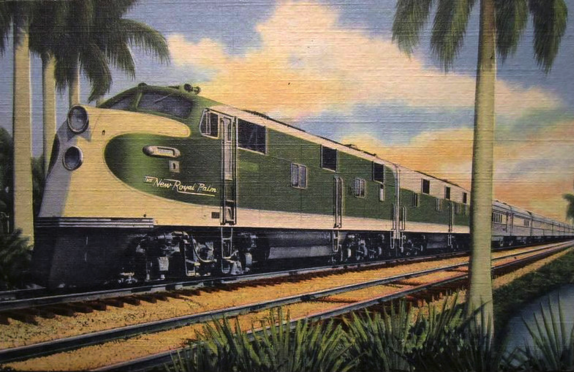 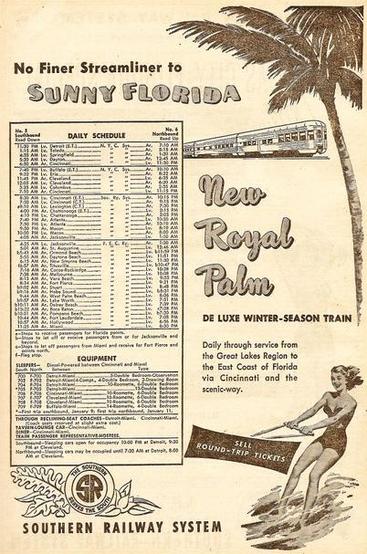 A Royal Palm ad and schedule.

Royal Palm
The Royal Palm was a named train of the Southern Railway which ran from Cincinnati, Ohio to Jacksonville, Florida and then on the Florida East Coast Railway to Miami, Florida. The train was discontinued in 1970.

Operations
The Royal Palm provided connections with the New York Central Railroad at Cincinnati for passengers headed to Detroit, Chicago, Cleveland, Buffalo. A through sleeper and coach between Miami and Detroit operated until 1957. The Royal Palm operated overnight between Atlanta and Jacksonville and during daylight hours to the north to Cincinnati. The Ponce de Leon alternated with the Royal Palm on a reverse schedule between Cincinnati and Jacksonville and the heavyweight companion was actually just as fast as the Palm during the 1950s and 1960s.

The Royal Palm (Train #3) departed Cincinnati going south via the Cincinnati, New Orleans and Texas Pacific Railway to Chattanooga, Tennessee, then on Southern's former East Tennessee, Virginia & Georgia main on to Atlanta, Georgia and Macon, Georgia, then via the Georgia Southern & Florida to Jacksonville, Florida.

The accident was also the subject of a song: "The Wreck of the Royal Palm" by Vernon Dalhart.

Post-war winter schedule
In 1949, an order for twelve EMD E7s was delivered to Southern Railway for use on its passenger trains. On December 15, 1949, the New York Central, Southern, and Florida East Coast began operation of the streamlined New Royal Palm winter-only train that replaced the Florida Sunbeam, which had run down Southern's (GS&F) Palatka branch to Hampton, where it connected to the Seaboard to Miami. The New Royal Palm was a Detroit-Miami streamliner which carried through-sleepers for Chicago, Cleveland, and Buffalo. Each train carried up to 20 cars including a dining car and tavern-lounge car. In the off-season, the equipment was used on the Royal Palm, where it was permanently assigned after the New Royal Palm ceased to operate in April 1955.

Stylish coaches provided by Southern and Florida East Coast featured spacious men's and women's smoking lounges and large color photo murals of Florida scenery on both bulkheads. Both trains carried an elegant Pullman-built split-level observation lounge car (with tall rear windows) for sleeping car passengers until 1957. (Click on Royal Street link below). Coach passengers could socialize and relax in an intimate little bar-lounge next to the diner. Until 1957 African-Americans were carried in the "colored" coach (RP-1), a combination baggage-coach behind the diesels. The dining car was segregated, and the coach-lounge was strictly off-limits to black passengers.

The amenities provided on the Royal Palm were gradually curtailed as Southern Railway attempted to reduce operating losses. The train was discontinued in segments - first between Jacksonville and Valdosta, Georgia in 1966 when the diner and sleeper were dropped - but the Palm carried its coach-lounge right up to the end of its long career. Ironically, the Royal Palm name was kept even though the train no longer served Florida where royal palms thrived on the lower east coast. Later the two-car remnant of the once proud Sunliner was discontinued south of Atlanta, then the section between Somerset, Kentucky and Dalton, Georgia was cut, leaving two disconnected trains, which were finally discontinued in 1970. Southern did not join Amtrak in 1971, at which time had only four trains, the Southern Crescent, the Piedmont, and two unnamed runs, one each in North Carolina and Virginia, the latter three being dropped in 1975. Southern ended passenger operations on January 31, 1979, and joined Amtrak, with its only remaining train being the Crescent.