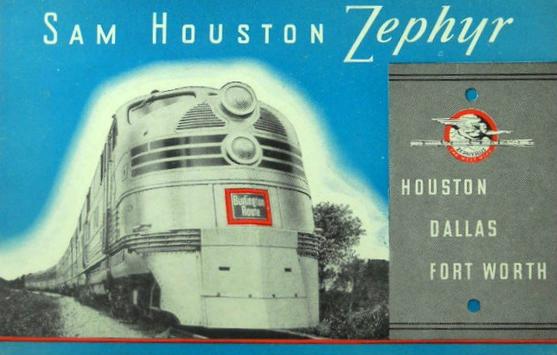 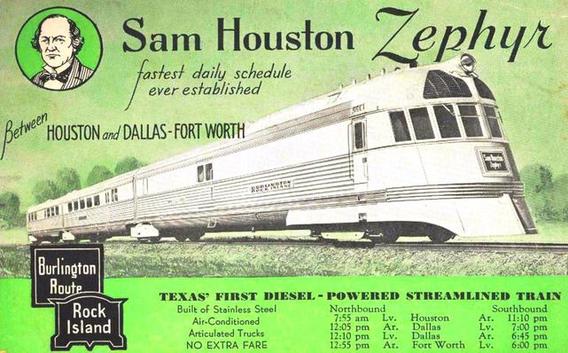 The modern Sam Houston Zephyr was also a real beauty, circa 1944.

The first trainset of the line sadly was destroyed by fire in 1944.

Inaugurated on October 1, 1936, the year of the Texas centennial celebrations, the streamlined train was named for Texas hero Sam Houston. On its original schedule, the train ran from the Texas and Pacific station in Fort Worth to Union Station in Houston in exactly five hours, making only four intermediate stops in Dallas, Waxahachie, Corsicana, and Teague.

The train was designated number 3 southbound, and number 4 northbound. Its chief competitor was the Sunbeam, operated by the Texas and New Orleans Railroad (a subsidiary of the Southern Pacific) on a parallel route between Dallas and Houston.

One of the original trainsets from the Twin Cities Zephyr, number 9901, was transferred to begin this new route. While under the management of the Rock Island, Zephyr 9901 power car was destroyed by fire on December 19, 1944. The Rock Island did not maintain the train properly; the cause of the file was oil residue which poor maintenance failed to remove. Because equipment was needed to keep the busy line running, the Rock Island replaced its Texas Rocket with the new Twin Star Rocket in July 1945. Like many other passenger trains that experienced declining revenues in the face of competition from automobiles and airplanes in the 1950s and 1960s, the Sam Houston Zephyr was discontinued in 1966.