A lone pair of 90-seat self-powered Budd Rail Diesel Cars (RDCs) were acquired for express service. They operated "back-to-back" as a single train unit from May 21, 1952 until the Redondo Junction derailment on January 22, 1956.

In June 1941, the railroad added a second eight-car trainset, also built by Budd, to handle the high demand. Its original consist was similar to the above save for an additional coach. Subsequent consists varied according to traffic levels.

Under Amtrak ex-Santa Fe Hi-Level coaches were used in the early 1970s. Modern Amfleet coaches arrived in 1976. For a six-month period in 1978 service on the route was supplemented by the El Camino cars owned by Los Angeles County.

Postcard depiction of the Santa Fe San Diegan at the San Diego depot, circa 1945.

The San Diegan
The San Diegan was one of the named passenger trains of the Atchison, Topeka and Santa Fe Railway, and a "workhorse" of the railroad. Its 126-mile route ran from Los Angeles, California south to San Diego. It was assigned train Nos. 70–79 (Nos. 80–83 were added in 1952 when RDCs began operating on the line).

The Los Angeles-San Diego corridor (popularly known as the "Surf Line" — officially, the Fourth District of the Los Angeles Division) was to the Santa Fe as the New York–Philadelphia corridor was to the Pennsylvania Railroad. Daily traffic could reach a density of ten trains (each way) during the summer months. The first San Diegan ran on March 27, 1938 as one set of equipment making two round trips a day.

A second trainset delivered in 1941 made possible four streamlined trains each way. A set of heavyweight equipment made a fifth trip in each direction. During and after the Second World War, furlough business from San Diego's military bases necessitated extra (albeit heavyweight) sections of San Diegans, and racetrack specials during horseracing season at Del Mar added to passenger train miles.

Amtrak continued to operate the San Diegan when it took over operation of the nation's passenger service on May 1, 1971, and it retired the name on June 1, 2000. Today, the route of the San Diegan (the second busiest passenger rail line in the United States) is served by Amtrak's Pacific Surfliner.

History
Surf Line
Construction of the Surf Line between Los Angeles and San Diego began on October 12, 1880, with the organization of the California Southern Railroad Company. On January 2, 1882, the California Southern commenced passenger and freight service between National City and Fallbrook Junction, just north of Oceanside. The Santa Fe assumed control of the California Southern and on August 12, 1888, completed the line between Los Angeles and San Diego. Initially known as the "Short Line", the route replaced the Santa Fe's existing circuitous route via Temecula Canyon. In the 1930s the Surf Line hosted four round-trips per day, with an average trip time of 3 1⁄2 hours.

The San Diegan, led by a pair of EMC E1 locomotives, rolls south along the Pacific Coast through San Clemente.

The San Diegan heading south near Miramar, California, circa 1973.  Photo by Drew Jacksich. 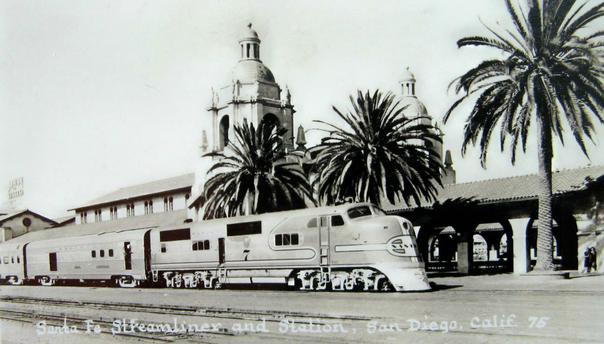 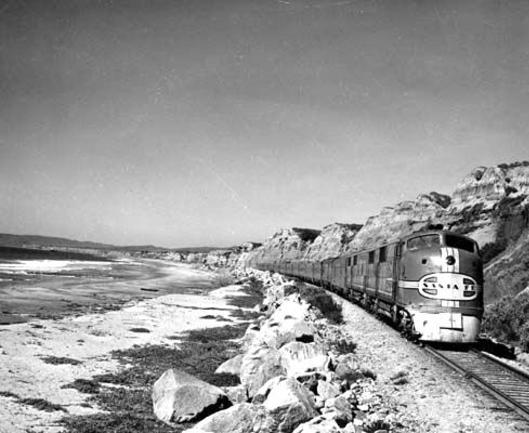 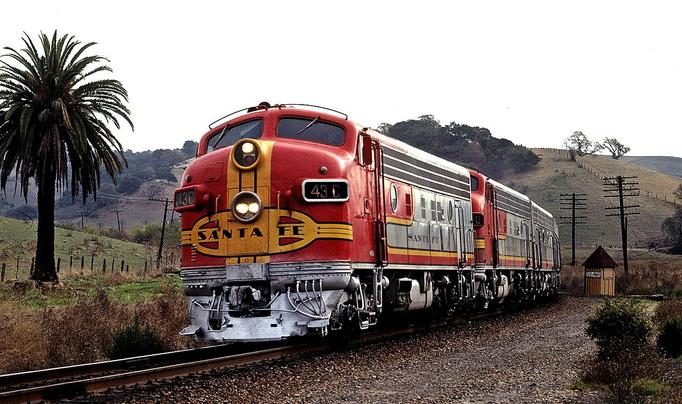 San Diegan
In the late 1930s streamlined trains were in transition. While fixed consists such as the Union Pacific Railroad's M-10000 were out (the last, the Illinois Central 121, had been built in 1936), railroads still ordered sets of equipment with the intention that those sets stay with a particular train. In 1937–1938 the Santa Fe embarked on a massive program to upgrade its passenger fleet, introducing new sets on the Super Chief, Chief, and El Capitan; and three new trains: the Chicagoan, Kansas Cityan, and the San Diegan.

On March 27, 1938, the Santa Fe inaugurated the San Diegan, operating on a schedule of 2 1⁄2 hours. The single equipment set could make two round-trips per day. A second San Diegan consist entered service on June 8, 1941, doubling the schedule to four daily round trips. The San Diegan was supplemented by two conventional heavyweight trains.

December 31, 1940: No. 1676, a 2-10-2 type locomotive with a 40-car freight train in tow, jumps the rails while cruising north via the Sorrento Grade and lands in the Pacific Ocean, with much of the rolling stock following suit. No one is killed in the accident, and it is many days before all of the wreckage can be pulled out of the sea.

June 8, 1941: A second lightweight train consisting of six coaches, a baggage-mail car, a tavern lunch-counter car, and a round-end observation car is added to the line. Service is increased to four daily round trips with streamliners and one round trip using conventional equipment.

October 27, 1941: A fifth, steam-powered train is added to the schedule, due in part to the need to transport military personnel to and from San Diego's bases. This semi-streamlined train carries a full buffet car, a diner, and three coaches that had all previously run as the Valley Flyer between Oakland and Bakersfield. The number of daily trains servicing the route increases to 16, on average.

1942: The average number of trains per day increases to 42. Consist size expands to 13 cars, and each logs 512 daily miles. Trains consisting of 10-12 former Southern Pacific interurban trailer cars, owned by the U.S. Maritime Commission but bearing ATSF markings, are fitted with conventional knuckle couplers at each end of the trainset and pressed into service to handle the additional passenger loads.

April 1943: The schedule is lengthened to three hours due to ever-increasing military movements.

May 10, 1943: Santa Fe adds a second mainline track along the San Diego line between La Mirada and Fullerton to accommodate increased wartime traffic. Centralized Traffic Control (CTC) is installed on the line.

May 21, 1952: The Santa Fe places two Budd Rail Diesel Cars, Nos. DC191 and DC192, into service. The two cars, coupled together, make two daily round trips. One of these is a non-stop express service timed at 2 hours 15 minutes.

January 10, 1954: The use of round-end observation cars is discontinued in order to eliminate the need to "turn" the trains in San Diego before heading northward.

January 22, 1956: Redondo Junction train wreck. Bound for San Diego, the two RDCs (making up train No. 82) derail at 69 mph in an evening high-speed accident at Redondo Junction, California, just south of the Los Angeles Union Passenger Terminal (LAUPT), killing 30 and seriously injuring 117. This accident ended the units' run on the "Surf Line." The radio reports of the accident were one of the first major uses of the Sigalert (known at the time as a "Sigmon Traffic Alert").

March 1956: General Motors' Aerotrain makes a series of experimental runs as a San Diegan consist. Thoughts of placing it in permanent service are quickly abandoned as the entire trainset has to be turned at each end of the line, and requires helper locomotives on the Sorrento Grade.

Summer 1956: Santa Fe's El Capitan makes three demonstration runs to San Diego to promote its new "Hi-Level" cars. The railroad begins placing illuminated drumheads (formerly mounted on round-end observation cars) on the vestibule gate of the trailing cars of the San Diegan. Service on the line is reduced to six daily round trips.

July 31, 1964: Mail trains Nos. 70 and 81 are dropped as all mail between Los Angeles and San Diego is now transported via truck (Santa Fe's mail contract expired on July 1 and was not renewed).

Amtrak
Amtrak assumed control of most intercity passenger trains in the United States of May 1, 1971. It retained two of the San Diegan's three round-trips. Between November 1971–April 1972 the long-distance Coast Daylight/Coast Starlight operated between Los Angeles and San Diego; in April this practice ended, replaced by a third San Diegan. Beginning in 1976 the state of California funded additional service: a fourth round-trip on September 1, 1976 a fifth on April 24, 1977, and a sixth on February 14, 1978. On October 26, 1980 Amtrak added yet another round-trip, increasing daily service to seven round-trips. Between April 29, 1984 and April 28, 1985 Amtrak experimented with an express service between Los Angeles and San Diego. This was targeted at business customers and made fewer stops than the regular San Diegan trains. Dubbed Metroliner after the high-speed service on the Northeast Corridor, it was unpopular and suffered from low ridership. After its discontinuance Amtrak restored the seventh San Diegan and introduced Custom class on the route.

June 26, 1988: Under Amtrak, one trip per day is extended north to Santa Barbara.

July, 1996: The IC3 Flexliner is put into two-week trial service during the height of the Del Mar horse racing season.

June 1, 2000: Amtrak retires the San Diegan and replaces it with the Pacific Surfliner, which runs between San Diego and San Luis Obispo, California.