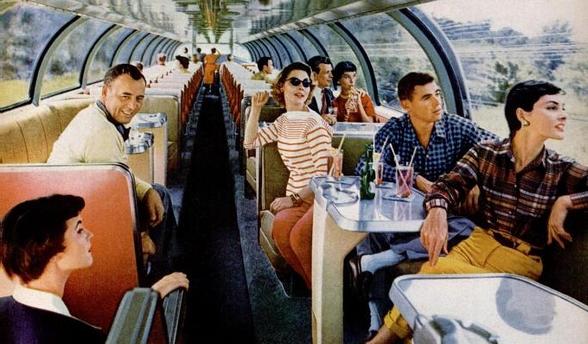 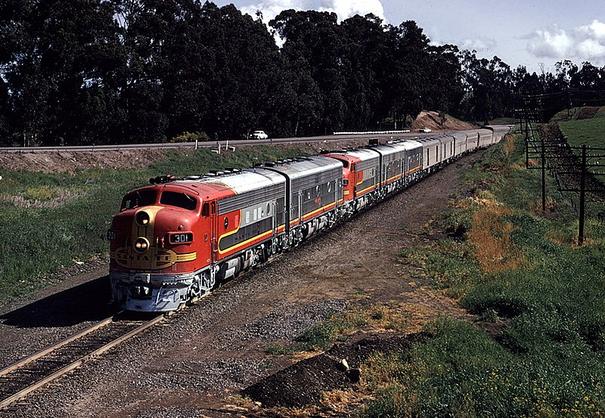 History
The Santa Fe introduced the streamliner on June 6, 1954; it was Santa Fe's last new streamliner and its first direct train from Chicago to the San Francisco Bay Area. It ran via Topeka and the Belen Cutoff through Amarillo, Texas instead of Raton Pass. Like other Santa Fe trains it ran to Oakland, California (Richmond, California after 1958), with a bus connection across the bay to San Francisco, California. At first the San Francisco Chief handled through cars for cities in Texas, plus a New Orleans, Louisiana sleeper conveyed by the Missouri Pacific Railroad in Houston, Texas. The San Francisco Chief carried the numbers 1 (westbound) and 2 (eastbound) and was the only Chicago–San Francisco train to make the entire journey on one railroad.

At the train's inauguration Taptuka, a Hopi chief led the ceremony. The train used a mix of old and new lightweight cars, including full-length dome cars (called "Big Domes") built by the Budd Company. There were improved reclining chairs in the coaches, "classic and popular music...on individual, push-button type receivers," and bar service on the upper level of the dome car via a dumb waiter.

The San Francisco Chief was one of few Santa Fe trains to survive the purge in 1967–1968, as dozens of trains were discontinued. The discontinuances were prompted in large part by the cancellation of railway post office contracts in 1967. Another survivor, the Grand Canyon, provided through service to Los Angeles at Barstow, California. Amtrak chose the route of California Zephyr for Chicago–San Francisco service, and the San Francisco Chief made its last run on April 30, 1971.

The discontinuance of the San Francisco Chief was the end of passenger service on the Belen Cutoff. Since 1971 there have been periodic discussions between Amtrak and the owners of that route (Santa Fe, then BNSF Railway) about re-routing the Super Chief, now the Southwest Chief, off the Raton Pass and on the cutoff. However, moving the train from its current route would deprive service to passengers at the Albuquerque and Santa Fe-Lamy stops.

Equipment
The San Francisco Chief was one of several Santa Fe trains to receive the new full-length "Big Dome" dome cars from the Budd Company. The upper level of each car seated 57 in chairs and 18 in a lounge area, while the lower level was given over to a bar-lounge. Its sleeping cars and diners were cast-offs from the Chief and other trains, while some of its coaches (which could seat 48) were new. In 1963–1964 the Santa Fe ordered 24 Hi-Level coaches for use on the San Francisco Chief.

In 1960 the San Francisco Chief carried "chair cars" (coaches), a "Big Dome" dome lounge, a dining car, and sleeping cars. The sleeping cars included sections, roomettes, double bedrooms, compartments, and drawing rooms. The train handled through sleepers from Tulsa, Oklahoma (to Chicago), Lubbock, Texas (to Chicago), and Dallas and Houston (to California) plus a set-out sleeper at Kansas City, Missouri. All chair car seats were reserved.

Passengers enjoying the lounge area of the upper level of a "Big Dome" in 1954. 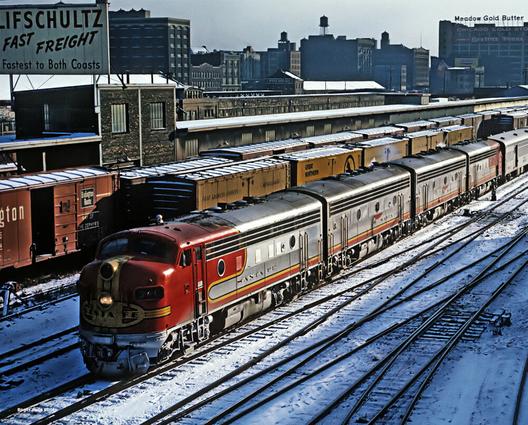 EMD F7s lead the San Francisco Chief west of Hercules, California in April 1971, just prior to discontinuance. Note the mixture of single-level and Hi-Level equipment.

Train No. 2, The San Francisco Chief, taken from the Roosevelt Road Viaduct, Chicago, Illinois on December 26, 1967.
A Roger Puta Photograph.