Ex-Southern Pacific EMD FP7 on the San Joaquin at Oakland in 1975.  Photo by Drew Jacksich.

A San Joaquin at Emeryville station in 2012. 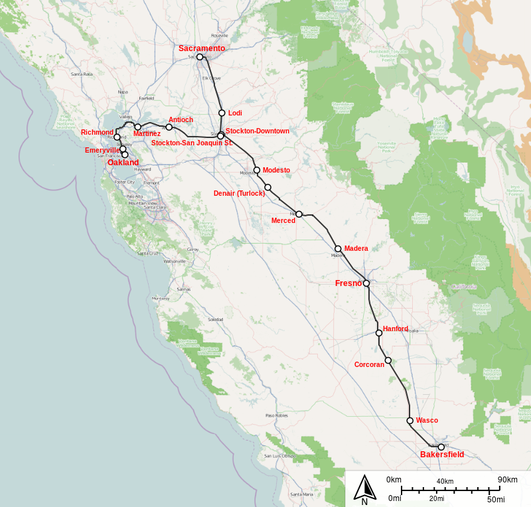 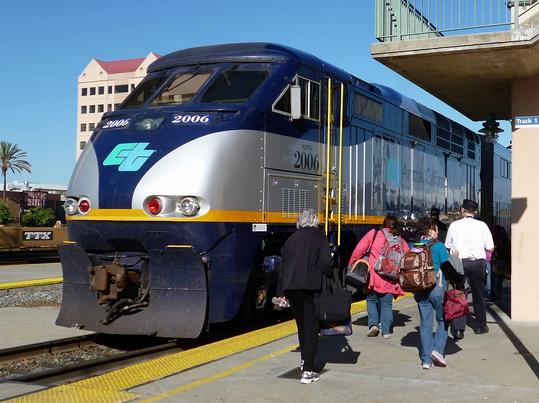 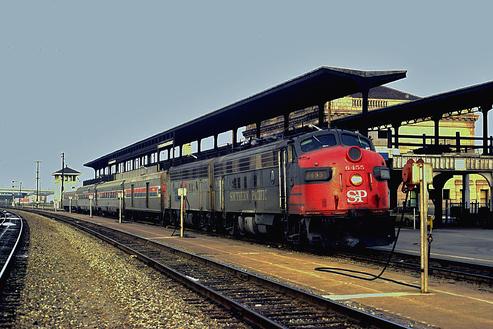 San Joaquin
The San Joaquin (sometimes referred to as San Joaquins) is a passenger train operated by Amtrak, with funding from the California Department of Transportation as part of the Amtrak California network in California's Central Valley. Fourteen trains a day run between its southern terminus at Bakersfield and Stockton, where the route splits to Oakland (five trains each way per day) or Sacramento (two trains each way per day). At Bakersfield, Thruway Motorcoach service offers connections to the Pacific Surfliner at Los Angeles Union Station, several points in Southern California, the High Desert and the Central Coast. At Emeryville, Thruway Motorcoach service offers connections to San Francisco.

History
Golden Gate/San Joaquin Daylight
The San Joaquin runs over lines that once hosted several passenger trains a day. The top trains were the Golden Gate on the Atchison, Topeka and Santa Fe Railway (predecessor to BNSF), and the San Joaquin Daylight on the Southern Pacific Railroad (later acquired by Union Pacific). Prior to 1960s service cutbacks passenger service continued south of Bakersfield, to Glendale and Los Angeles.

In April 1965 as ridership on passenger trains continued to drop, the Santa Fe Railway received permission from the Interstate Commerce Commission to severely curtail Golden Gate operations, with service finally abandoned three years later. The San Joaquin Daylight was discontinued with the start-up of Amtrak in May 1971.

In 1979 Amtrak proposed discontinuing the San Joaquin as part of system-wide reductions ordered by the Carter Administration. The state of California stepped in to provide a yearly subsidy (then $700,000) to cover the train's operating losses, and it was retained. At the time the state asked Amtrak to add a second daily frequency between Oakland and Bakersfield, and to extend the service south over the Tehachapi Pass to Los Angeles. Amtrak added the second train in February 1980, but attempts to extend the train over the Tehachapi Loop failed due to Southern Pacific's opposition.

To this day the San Joaquin does not continue south of Bakersfield because the only line between Bakersfield and points south, the Tehachapi Pass, is one of the world's busiest single-track freight rail lines.

Rolling stock
For its first two years of operation the San Joaquin used single-level coaches Amtrak had inherited from other railroads. In October 1976 Amtrak "Amfleeted" the San Joaquin, introducing new Amfleet coaches to the service. From 1987-1989 Amtrak used Superliner and ex-ATSF Hi-Level coaches. For a short period beginning on June 15, 1987, this included a full dining car on one of the trains. Amtrak re-equipped the San Joaquin trains again in 1989, this time with new Horizon coaches, when service expanded to three daily round-trips. The San Joaquin began receiving the Superliner-derived "California Cars" that it uses today in 1995.

Locomotives
Amtrak California operates its own fleet of EMD F59PHI and GE P32-8WH locomotives that are used on San Joaquin trains. These locomotives are owned by Caltrans and carry its CDTX reporting marks. Amtrak owned locomotives are also occasionally used on the San Joaquin, including the P42DC.

The San Joaquin is equipped with Amtrak California's fleet of "California Car" bi-level, high-capacity passenger cars owned by the California Department of Transportation (Caltrans). Each trainset typically consists of two coach cars, a coach/baggage car, a café (dining) car, and a cab/coach car. The cab/coach car is a similar to other coaches but with an engineer's operating cab and headlights on one end, allowing the train to be operated in push-pull mode, which eliminates the need to turn the train at each end-point. Caltrans is in the process of refitting the cab/coach cars to have a space on car's lower level for storage for checked luggage and bikes.

Caltrans also owns several Surfliner bi-level cars that are used on some San Joaquin trainsets. The newer cars look very similar to the California Car fleet, but feature reclining seats, open overhead luggage racks and a restroom on the upper-level of each car.

In 2007 Caltrans paid to repair several wreck-damaged Superliner I coaches in exchange for a six-year lease of the Amtrak owned cars that are normally used on long-distance trains. 4 of these cars are painted to match the "California car" livery and often appear in service on the San Joaquin route in place of a coach/baggage car.

Increasing ridership on the San Joaquin led Caltrans to purchase 14 Comet IB rail cars from New Jersey Transit in 2008 for $75,000 per car. The former commuter cars refurbished and reconfigured by Amtrak's Beech Grove Shops to serve as intercity coaches at a cost of approximately $20 million. The refurbished cars have reclining inter-city seats with tray tables (4 per row), AmtrakConnect WiFi, two power outlets at each seat pair, luggage racks, trash/recycling bins, a restroom, and 6 workstation tables in the center of the car.

These single-level cars will be used to create two "Comet car" trainsets that will run between Oakland and Bakersfield. That will allow Caltrans to break up two bi-level "California car" trainsets to use the cars to add another coach car to each of the San Joaquin's remaining "California Car" trainsets.

Trains to the Sacramento Valley Rail Station diverge in Stockton and run north to Sacramento on Union Pacific's Fresno Subdivision and on the Martinez Subdivision within Sacramento.