The San Juan Express at Alamosa, Colorado, circa 1949. 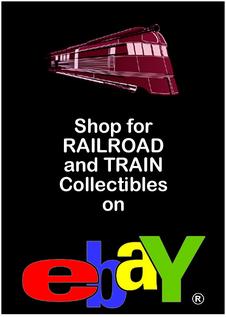 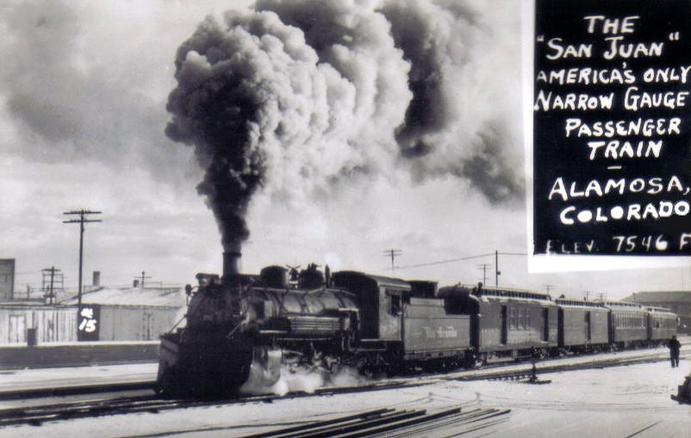 The San Juan Express
The San Juan Express (also known as simply the San Juan) was a narrow gauge train that ran on the 3 feet (0.91 m) Denver & Rio Grande Western Railroad(D&RGW) route from Durango, Colorado via Chama, New Mexico; Cumbres Pass; and Antonito, Colorado to Alamosa, Colorado. The train ran from February 11, 1937 until January 31, 1951 as train numbers 115 and 116, though towards the end of the passenger service it took on the number 215 and 216.

The railroad line was closed by the D&RGW in 1968 and much of the narrow gauge trackage has since been abandoned. A surviving portion of the narrow gauge track in the route is the 64 miles (103 km) long Cumbres & Toltec Scenic Railroad between Antonito and Chama which calls its westbound train the Colorado Limited and its eastbound train the New Mexico Express. The line from Antonito to Alamosa is now standard gauge only and belongs to the San Luis and Rio Grande Railroad. Normally, from Alamosa to Chama, a D&RGW K-36 (Or K-37) class locomotive, either 482, 483, 484, 485, 488, or 489 would haul the 4 to 5 car consist. At Chama, the K-36 and their crew would be swapped out with a D&RGW K-28 and their crews would take over from Chama, to Durango. On the return journey it would be the other way around. However, there is photographic evidence of a K-36 locomotive hauling the train the entire length.

Normally, the train would be 4 cars long, which consisted of a Railway Post Office Car (RPO), a Baggage Car, a Passenger Car, and a Parlor Car. However, there is photographic evidence of the train having as many as 8 cars.

Sections used today
The Cumbres & Toltec Scenic Railroad uses the portion from Antonito, CO to Chama, NM. The portion from Durango to Silverton (not part of the San Juan Express) is run by the Durango & Silverton Narrow Gauge Railroad. The line from Antonito to Alamosa, CO is now standard gauge only and belongs to the San Luis and Rio Grande Railroad.