The Scout
The Scout was one of the named passenger trains of the Atchison, Topeka and Santa Fe Railway. It started as train Nos. 1 (westbound) and 10 (eastbound) between Chicago, Illinois and Los Angeles, California. Inaugurated on January 16, 1916, this "budget" heavyweight train had tourist sleeping cars with upper and lower berths, "chair" cars (coaches) and an open-end observation car. 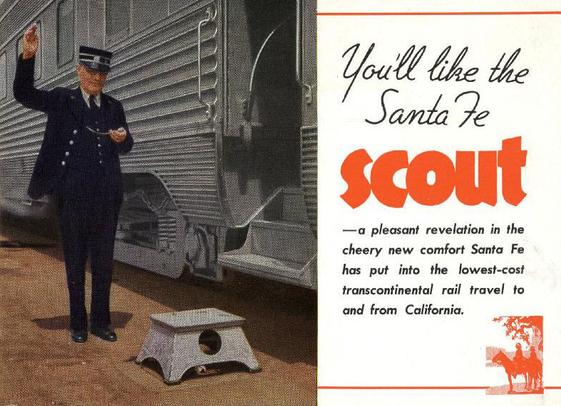 January 19, 1916: The Scout commences operation.
1920: The eastbound Scout is assigned No. 2, but becomes No. 10 the following year.
January 4, 1931: The Scout is discontinued during the Great Depression. Thereafter, economy service was provided by the Hopi, the Missionary, and the Navajo.
May 10, 1936: The "new" (renovated) Scout resumes. The westbound trip was completed in 60 hours, 15 minutes, while the eastbound schedule was reduced to 58 hours, 35 minutes.
June 7, 1948: The Scout is withdrawn as passengers prefer to use Santa Fe's streamlined trains.

A portion of a Santa Fe brochure for the Scout, circa 1941.