Equipment
In 1952 a typical Seminole carried sleeping cars for five city pairs: Chicago–St. Petersburg, Chicago–Tampa/Sarasota, Chicago–Birmingham, St. Louis–Tampa/Sarasota, and St. Louis–St. Petersburg. With the exception of the Birmingham sleeper these were scheduled for alternate days, so that there was always one sleeper each for Chicago and St. Louis on the one hand, and St. Petersburg and Tampa/Sarasota on the other. Connecting Atlantic Coast Line trains handled the sleepers south of Jacksonville; the Illinois Central's Chickasaw handled the St. Louis sleepers west of Carbondale, Illinois. The sleeping cars each had eight sections, two compartments, and a drawing room. A dining car operated Chicago–Jacksonville and a buffet-lounge Carbondale–St. Louis.

Cultural influence
The Seminole was a likely influence on blues guitarist Tampa Red's song "Seminole Blues":
“My baby’s gone, she won’t be back no more/She left this mornin’, she caught that Seminole" 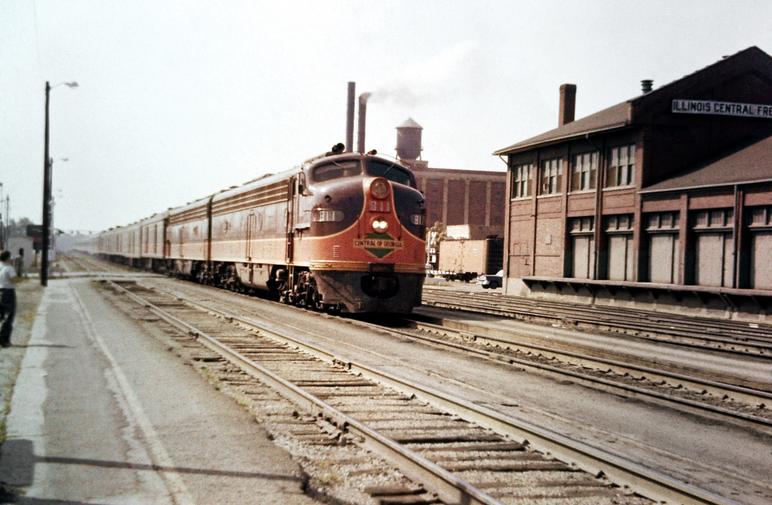 The Seminole
The Seminole, also known as the Seminole Limited, was a streamlined passenger train operated by the Illinois Central Railroad, Central of Georgia Railway, and Atlantic Coast Line Railroad between Chicago, Illinois and Jacksonville, Florida. It operated from 1909 to 1969 and was the first year-round service between the two cities.

History
The Illinois Central Railroad, Central of Georgia Railway, and Atlantic Coast Line Railroad introduced the Seminole Limited on November 15, 1909, in time for the winter tourist season. The new train carried coaches, sleeping cars, and a full dining car. Through services included a St. Louis, Missouri–Jacksonville sleeper and a Chicago–Savannah, Georgia sleeper. The train operated on a "two night out" schedule, departing Chicago at 9:00 PM in the evening and arriving in Jacksonville at 7:05 AM on the second morning out. This permitted a late afternoon arrival in Birmingham, Alabama. The travel time was 35 hours from Chicago, three hours faster than existing services. The train operated on a daily schedule. The Illinois Central billed it as a "solid, fast through train." From Jacksonville passengers could make connections to other locations in Florida. It was the first year-round service between the two cities.

The African-American dramatist and playwright T. Montgomery Gregory, then a professor at Howard University, rode the Seminole Limited in Georgia in 1915 as part of his investigation into "Jim Crow" (segregated) cars on Southern trains. Gregory noted that even though the segregated cars on the Central of Georgia were "superior" to other railroads and that the Seminole Limited in particular was "one of the most favorable trains in the South", the train's conductor forced him from his coach at three in the morning to make room for whites who wanted to smoke. He was placed in an ostensibly white car which he characterized as "filthy" and the "nastiest...(he) had ever ridden in."

In 1950 the Illinois Central rescheduled the Seminole to depart Chicago at 4:00 PM. This put the southbound train in Birmingham at 8:30 AM and Jacksonville at 9:00 PM.

Central of Georgia EMD E8 No. 811 leads the Seminole at Kankakee, Illinois, circa August, 1964.