History
Shasta Limited
The Shasta Daylight was a replacement for the Shasta Limited that had run on the Shasta Route since October 1895. The first Shasta followed the original route through the Siskiyou Mountains, via Medford, Grants Pass, and Roseburg, Oregon. This line had steep grades and sharp curves; in summer 1926 the fastest schedule Portland to San Francisco was 27 hours.

Shasta route upgrade
During the railroad's management by Edward H. Harriman plans to upgrade the Shasta Route were unveiled. But his death and the government's attempt to break up Southern Pacific's merger with Harriman's Union Pacific, followed by an attempt to subtract the Central Pacific from the SP, delayed construction. Not until 1927 was the new Cascade Line via Willamette Pass and Klamath Falls opened as the main route between the Bay Area and the Northwest.

Shasta from 1931
The original Shasta never operated on the new line. Starting in 1931, the train ran as its own only between Portland, Oregon, and Dunsmuir, California, south of the junction of the Siskiyou and Cascade Lines at Black Butte. South of Dunsmuir, the Shasta was consolidated with the Klamath. One year later the Shasta was combined with the Cascade between Eugene, Oregon, and Portland. Through service from Oakland to Portland via the Siskiyou line would end on February 13, 1938.

Shasta from 1946
The train suspended operations during World War II but returned on August 4, 1946 as trains 327 and 328, local trains between Dunsmuir, California and Grants Pass, Oregon. The name Shasta was retained until July 10, 1949 when the Shasta Daylight began service. The local train continued unnamed (although locals nicknamed it "The Scoot") until discontinued on February 26, 1952.

In the presence of Mount Shasta
Advertising
In 1953, Southern Pacific advertised the Shasta Daylight as the "Sweetheart of the Northwest". While Portland and Seattle were served by colorful first-class transcontinental trains such as the Empire Builder on the Great Northern Railway, the North Coast Limited on the Northern Pacific Railway and the City of Portland on the Union Pacific, no other railroad could compete against the Southern Pacific who held almost a monopoly in the Portland - Bay Area market. The bright-colored streamliner seemed to blend right in with seemingly endless evergreen forests, sky blue lakes, and ruggedly handsome mountain peaks. Between terminals, the route featured few communities, the largest towns being Eugene and Salem with about 50,000 residents apiece. Less than 12,000 lived in Albany and Klamath Falls, Oregon, and Redding, California. Dunsmuir and Davis only had about 5,000 people. Stops at Chemult, Oregon, and Gerber, California, had a handful of permanent residents; between were miles of barely developed landscape.

Descriptive writing
Writer and trainfan Lucius Beebe described the experience as "riding all morning in the shadowy presence of Mount Shasta, a brooding, symmetrical cone of everlasting snow that dominates the right-of-way for hundreds of miles." But there were other highlights: Shasta Lake, the Sacramento River Canyon, the Klamath Basin, and the Cascade Range. Beebe further noted, "At its terminals in Oakland and Portland are the visible and tangible evidences of urban concentration and what passes for civilization, the neon lights, the meter cabs, and the hurrying traffic of commerce and manufacture. But what lies in-between them is largely wilderness where the solitary inhabitant is likely to carry a gun in the crook of his arm and have a wild-looking dog for company."

Dome cars
Southern Pacific began rebuilding prewar cars into unique dome cars which featured both high-level seating and low-level lounge with high skylight, marketed with the romantic motto "Stairway to the Stars". Trains magazine editor David P. Morgan said these domes were the best in operation on any American railroad. The cars were painted in the Daylight color scheme.

Decline
Donald J. Russell became President of the Southern Pacific in 1952. He was on hand to dedicate the rebuilt dome cars when they began service, but he was a bottom-line man and was aware of the popularity of automobiles and the airlines. SP's passenger revenues were dropping. Russell wanted to expand his railroad, moving into pipelines, communication, and real estate and offering faster, more efficient freight service. Seeing a trend, Russell told stockholders that the passenger train would one day disappear. "You can't make the people do what they don't want to do," he said.

New color scheme
In 1959 the Southern Pacific debuted a new color scheme for their diesel locomotives, dark gray with a red nose. It became known to fans as the "bloody nose" scheme. Shasta Daylight promotions, previously showing a Daylight-colored set of PA units, were airbrushed to black and red.

Citing low ridership during the winter, SP asked the Interstate Commerce Commission (ICC) to allow the Shasta Daylight to run tri-weekly between September 15 and December 14 and again from January 15 to May 28. The train would run daily during summer and the Christmas holiday season.

As the train rolled into the 1960s Daylight cars were repainted in the aluminum stripe with red letterboard format used on the Sunset Limited. During this time the train was a combination of the two color schemes plus the gray SP baggage car.[9] The PA's were replaced with FP7 units. What could have been an opportunity for the train, the 1962 Seattle World's Fair, saw little promotion. In 1964 SP went back to the ICC and asked to discontinue the train during the winter off-season.

Service withdrawn
In summer of 1965 the Shasta Daylight was a six-to-seven car train, but going out with as few as five. The Daylight color scheme was gone. A normal consist included two FP7 locomotives in red and dark gray, a dark gray baggage car, a streamlined coach, a dome lounge, a coffee shop car, one or two additional coaches (sometimes an articulated pair), and a coach-observation. Southern Pacific asked for permission to not operate the train in 1966 but, after hearings, were ordered to provide service that summer. The train would operate sans its coach-observation, which went to the San Joaquin Daylight.

The U.S. Interstate Commerce Commission (ICC) ruling, noting the train was to operate for 1966, was to prove to be a loophole when SP announced the Shasta Daylight would not operate in the summer of 1967. The Oregon PUC protested but the remains of the Shasta Daylight now ceased operations. Russell's successor, Benjamin F. Biaggini, claimed "...the cold fact looms that the long-distance passenger train is dead and no amount of prayer or wishful thinking can bring it back to life." Labor Day 1966 saw the final runs of SP's former "sweetheart."

Chair cars from the Shasta Daylight had already been transferred to the Cascade, which became the sole passenger train on the Shasta Route. It too had been downgraded from an all-Pullman service with a triple-unit diner and would become a tri-weekly train in 1970. That it was able to survive up to the creation of Amtrak proved a savior to West Coast rail passenger service, although Mount Shasta is passed at night.

Surviving equipment
Parlor-Lounge-Observation car No. 2955, one of the two 1941-built cars assigned to the Shasta Daylight for its 1949 inauguration, survives today. It is owned by the Northwest Rail Museum, a preservation group in the Portland area, and sees occasional excursion service behind the city of Portland's two operational steam locomotives, former Southern Pacific GS-4 "Daylight" 4-8-4 No. 4449, and former Spokane, Portland & Seattle 4-8-4 No. 700. The car is still painted in the colorful "Daylight" paint scheme.

Dome-Lounge cars No. 3605 and No. 3606, converted from existing single-level cars in 1955 for the train, also survive. #3605 is owned by the Royal Gorge Route Railway in Colorado, where it is in storage awaiting restoration. #3606 is privately owned as part of a collection of former railroad cars in Rocklin, California.

Shasta Daylight circa 1949. The train still has its EMD E7 locomotives. 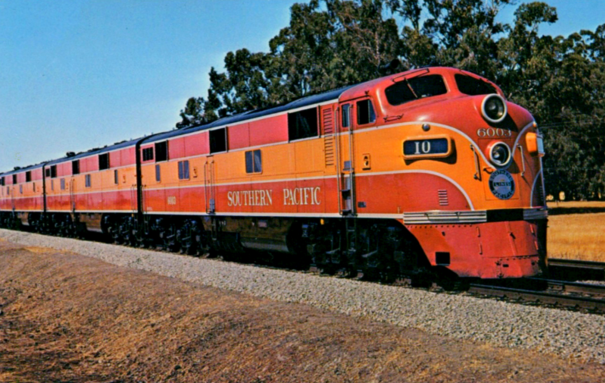 Shasta Daylight
The Shasta Daylight was a Southern Pacific Railroad passenger train between Oakland Pier in Oakland, California, and Portland, Oregon. It started on July 10, 1949 and was SP's third "Daylight" streamliner; it had a fast 15 hour 30 minute schedule in either direction for the 713-mile trip through some of the most beautiful mountain scenery of any train in North America. The Shasta Daylight replaced heavyweight trains on the same route that had taken nearly a day and night to complete the run. The Shasta Daylight was the first diesel powered Daylight and the only Daylight to run beyond California. The scenic route of the Shasta Daylight passed its namesake Mount Shasta in daylight hours.

Locomotives
Initially the Shasta Daylights were assigned A-B-B sets of EMD E7 units, but within days this changed to A-B-A sets of ALCO postwar 2,000 hp PA units. The ALCO units with the same horsepower rating had dynamic braking, which the E7s lacked; with their larger traction motors the ALCO PAs were supposed to be able to outpull the E7s.

Passenger cars
All coaches, diners and tavern cars had larger picture windows. The cars did not have the fluted panels seen on prewar Daylights, but the two Parlor Lounge Observation cars (built in 1941 and refurbished for service on the new Shasta Daylight) retained their side fluting and their standard-sized windows. For visual unity along the train the above-window paint stripe continued at the high-window height along these cars.