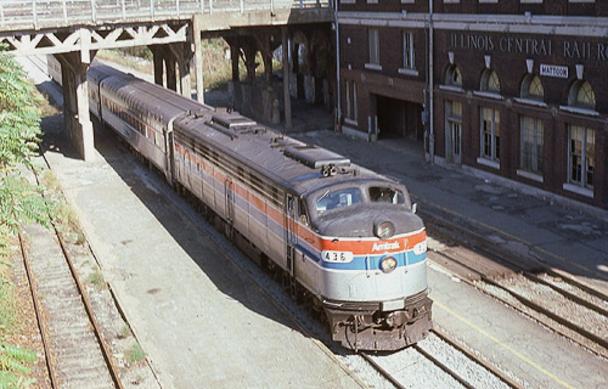 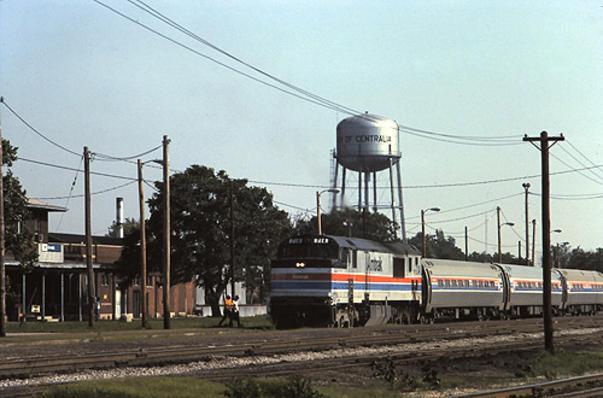 The southbound Shawnee at Mattoon station in February 1976.

The Shawnee at Centralia in June 1978.

Shawnee
The Shawnee was a passenger train operated first by then Illinois Central Railroad and then by Amtrak between Chicago, Illinois and Carbondale, Illinois. It operated from 1969 until 1986. The train was one of the few Illinois Central trains Amtrak retained after the end of most private-sector passenger service in the United States on May 1, 1971. The Shawnee operated until January 12, 1986, when budget cuts led to its consolidation with the Illini.

The Shawnee took its name from the Shawnee, an Algonquian-speaking people native to North America who formerly lived in southern Illinois. The train made its first run on June 3, 1969. It replaced the Seminole, a long-distance train which had operated between Chicago and Jacksonville since 1909. At the dawn of Amtrak the Shawnee was one of several trains the Illinois Central operated over the Chicago—Carbondale corridor, including the Southern Express, Creole, and Louisiane. Along with the Panama Limited, also retained from the IC, the Shawnee continued to use Central Station instead of Union Station in downtown Chicago.