B&O Train No. 8, the Shenandoah, along the Potomac River near Hansrote, West Virginia, on October 30, 1952. 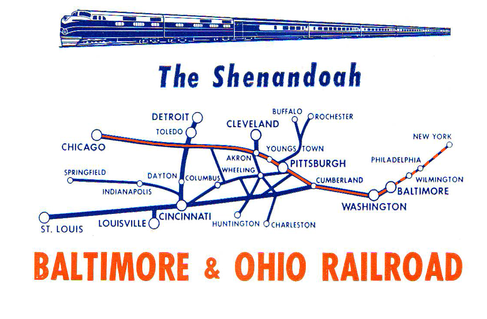 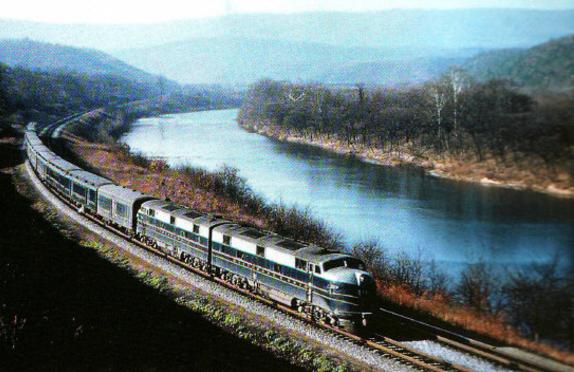 The Shenandoah
The Shenandoah was an American named passenger train of the Baltimore and Ohio Railroad (B&O), one of four daily B&O trains operating between New York City and Grand Central Station in Chicago, Illinois, via Washington, D.C. and Pittsburgh, Pennsylvania during the 1930s–1950s. Other B&O trains of that period on the route were the Capitol Limited, Columbian, and the Washington - Chicago Express. After April 26, 1958, the B&O no longer operated passenger trains north of Baltimore, Maryland, which then became the eastern terminus of the Shenandoah for the remainder of its existence.

In the 1940s–1960s, the daily Shenandoah consisted of coaches, five Pullman sleeping cars, a lounge car with a radio, and a full-service dining car. Beginning in the early 1950s, the train also had a Strata-Dome combination sleeper-dome car on alternate days.

The westbound Shenandoah, operating as Train No. 7, left Washington in the late evening at 11:30 p.m., several hours after the 5 p.m. departure of the Capitol Limited and Columbian from the Nation's Capitol, making it a favorite of travelers seeking to make convenient connections with other railroads in Chicago including the streamliners of the Santa Fe and Union Pacific Railroads.The train also carried a heavy volume of mail and express, with "head-end" equipment such as Railway Post Office cars a regular part of the Shenandoah's consist.

Prior to April 26, 1958, when the B&O discontinued passenger service north of Baltimore, the Shenandoah operated to New York City via Philadelphia, Pennsylvania. As passenger patronage on American railroads continued to decline in the 1960s, the combination sleeper-dome and dining cars were dropped, and trains Nos. 7–8 were renamed the Diplomat in 1964 and then dropped altogether in 1967.

Amtrak revived the name in the 1970s for the short-lived Shenandoah, a Washington—Cincinnati train.

The route of the Shenandoah.