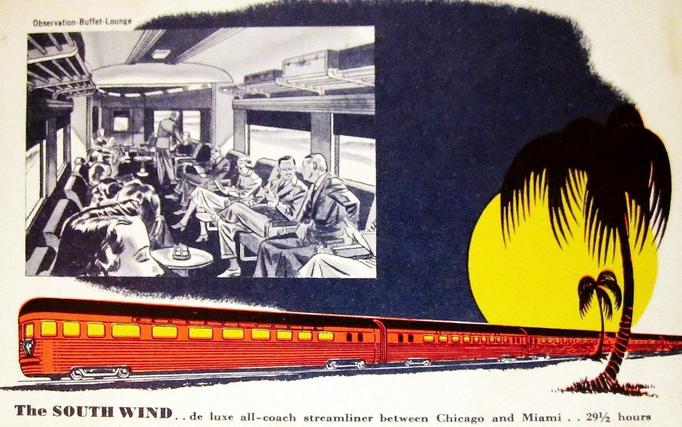 The South Wind
The South Wind was a named passenger train equipped and operated jointly by the Pennsylvania Railroad, the Louisville and Nashville Railroad, the Atlantic Coast Line Railroad (later Seaboard Coast Line), and the Florida East Coast Railway. The South Wind began operations in December 1940, providing streamliner service between Chicago, Illinois and Miami, Florida. This was one of three seven-car streamlined trains operating every third day along different routes between Chicago and Miami. The other two trains were the City of Miami and the Dixie Flagler. The South Wind remained in service through the creation of Amtrak in 1971 but was soon replaced by the Floridian.

Route
The South Wind departed Chicago Union Station and ran through Logansport and Indianapolis to Louisville Union Station. It then proceeded down the Louisville & Nashville main line through Bowling Green, Nashville, and Birmingham to Montgomery. From Montgomery, it ran down the Atlantic Coast Line through Dothan, Thomasville, Valdosta and Waycross to Jacksonville. The final trip to Miami was over the Florida East Coast. After a number of schedule changes throughout the late 1940s and early 1950s, the train was running every other day opposite the City of Miami, both trains then carrying sleeping cars. Following the discontinuance of the Southland in 1957, Florida West Coast service was added, using cars added to the West Coast Champion trains in Jacksonville.

History
The train, beginning service in December 1940, used a seven-car trainset built by the Budd Company. The set, which did not include sleepers, was similar to trains built for the Seaboard Air Line's New York-Miami Silver Meteor and the Southern's New York-New Orleans Southerner, except that it was painted in the Pennsylvania's Tuscan Red, which required special preparation of the stainless steel that composed the cars' sides.

The South Wind, like most trains that operated in the South, was racially segregated. As required by law in Southern states the train passed through, the combination baggage/coach was reserved for black passengers. Blacks were not allowed in the observation lounge on the rear and were restricted to two tables behind a curtain in the dining car. The curtains came down after President Truman's 1948 mandate forced railway dining cars to integrate; however, dining car stewards still refused to seat blacks and whites at the same table for many year afterwards.

The South Wind ran every third day between its respective endpoint cities, in coordination with the Dixie Flagler (an FEC-owned train that used the Chicago and Eastern Illinois Railroad (C&EI), L&N, Nashville, Chattanooga and St. Louis Railway (NC&STL), Atlanta, Birmingham and Coast Railroad (AB&C), ACL and FEC) and the City of Miami—another colorful seven car Illinois Central Railroad train, which ran south of Birmingham by the Central of Georgia Railroad and ACL to Jacksonville, then on to Miami via the FEC. Additionally, when service was initiated, there were actually three every-third-day trains on each route. The Dixie Flagler was accompanied by the Dixieland and Dixiana; the South Wind by the Florida Arrow and Jacksonian; and the City of Miami by the Sunchaser and the Floridan (note absence of the second "i"). This coordination enabled passengers to have the convenience of daily service all along their respective routes between Chicago and Miami. The additional two trains per route were discontinued during World War II.

Originally the coordinated schedules of the three streamliners left Chicago in the morning, arriving Miami early the next afternoon. The trains were quickly turned and left Miami in the late afternoon arriving back in Chicago just before bedtime the next day. After World War II, the Dixieland, Sunchaser and Florida Arrow were reinstated. Upon their discontinuation, the City of Miami and South Wind trains began running two days out of three. However, the tight Miami turnaround hampered operations, and after adding trainsets, the City of Miami and Southwind changed to every-other-day operation. The Dixie Flyer remained every third day. In 1954, it was re-equipped and renamed the "new" Dixieland.

In December 1957 both the Dixie Flagler and the Southland were discontinued. The Southland had run daily from various Midwestern cities through Atlanta and Albany directly to the west coast cities of Tampa and St. Petersburg, thus bypassing Jacksonville. At that time, west coast cars were added to the City of Miami and South Wind. These cars were attached to the West Coast Champion sections going from Jacksonville to Tampa-Sarasota and to St. Petersburg via Trilby, which is now largely dismantled. After the merger of the ACL and Seaboard, the combined Seaboard Coast Line changed the west coast operations, in April 1968, to the single section to St. Petersburg with a motor connection to Tampa.

The 1963 strike of non-operating unions on the Florida East Coast Railway resulted in the abrupt end of all passenger services on that railroad. While passenger trains would return in two short EMD E9-powered consists that operated due to a requirement in FEC's charter to provide such trains, the South Wind along with other named trains such as the City of Miami, Florida Special and East Coast Champion continued to use the Atlantic Coast Line's Jacksonville-Palatka-Tampa main line between Jacksonville and Auburndale and the Seaboard Air Line route from Auburdale to Miami. This would be a harbinger of the future with the upcoming Seaboard Coast Line (July 1, 1967) merger and the eventual operation of this train by Amtrak.

While the train grew in size throughout the 1940s, and 1950s, the 1960s saw the decline that caught most passenger trains in the United States. The Pennsylvania Railroad merged in 1968 with the New York Central to form Penn Central, a railroad that was as hostile to passenger service as the Southern Pacific, though unlike the SP, the PC's services were noted for their poor quality and consistent efforts to reduce their scope.

The South Wind was not immune and the PC stopped handling it between Chicago and Louisville in December 1969, choosing instead to operate a coach only connection. This left the L&N and SCL to carry on the truncated service until May 1, 1971 when the National Railroad Passenger Corporation (Amtrak) assumed responsibility for the provision of passenger services over the L&N, SCL, and Penn Central, among others.

Amtrak
When Amtrak took control of most passenger rail service in the United States on May 1, 1971, the South Wind became a daily service. Under Amtrak the South Wind departed Chicago's Central Station in the morning and arrived in St. Petersburg, Florida or Miami, Florida late afternoon the following day. Total trip time was 33–34 hours, depending on the endpoints. On November 14, 1971, Amtrak changed this to a two-night schedule: trains would leave Union Station in the late evening and arrive in Florida the morning of the third day. Amtrak named this new train the Floridian, and the South Wind ceased to exist.