Route Map of the Southwest Chief.

Amtrak No. 69 on the westbound Southwest Chief at Barstow, California in 1999. 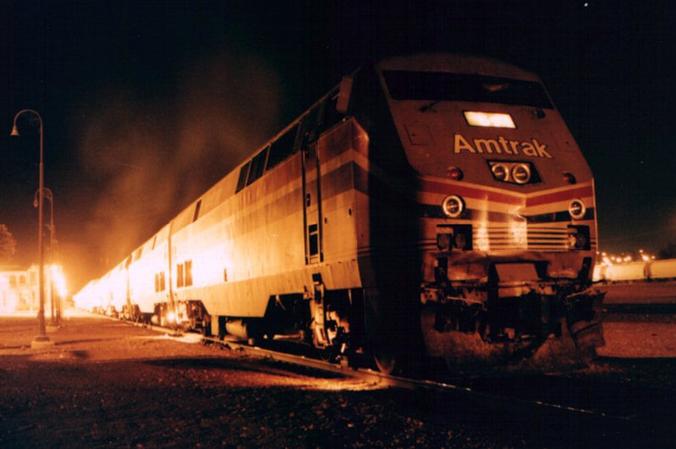 The Southwest Chief (formerly the Southwest Limited and Super Chief) is a higher-speed passenger train operated by Amtrak on a 2,265-mile route through the Midwestern and Southwestern United States. It runs between Chicago, Illinois and Los Angeles, California, passing through Illinois, Iowa, Missouri, Kansas, Colorado, New Mexico, Arizona and California.

The Southwest Chief is the successor to the Super Chief, which, along with the Chief and El Capitan, were notable Chicago-Los Angeles trains that were operated by Atchison, Topeka and Santa Fe Railway. The Super Chief name would be retained after Amtrak took over passenger rail service in 1971, until March 1974, when the Santa Fe forced Amtrak to drop the name because of a perceived decline in quality after Amtrak took over passenger service. The train would be renamed the Southwest Limited, and after subsequent improvements in service, the Santa Fe allowed Amtrak to change the train's name to the Southwest Chief on October 28, 1984.

Amtrak's Southwest Chief departs Los Angeles Union Station in downtown LA at 6:15 p.m. (Pacific Time), making its way through suburban Fullerton, Riverside, and San Bernardino, California. After climbing through Cajon Pass, the train enters the Mojave Desert and stops in Victorville, Barstow and Needles, California. The Southwest Chief then crosses Arizona with stops in Kingman, Williams Junction, Flagstaff and Winslow, Arizona. Entering New Mexico around 8:00 a.m. (Mountain Time), the train stops briefly in Gallup before crossing the Rio Grande and entering Albuquerque for an extended stop. The rest of the afternoon is spent traversing NE New Mexico's highlands with stops in Lamy, Las Vegas, and Raton, New Mexico. The train then crosses Glorieta Pass and Raton Pass through the Sangre de Cristo Mountains, on a route which includes some of the last semaphore signals in use on American mainline railroads, and then stopping in Trinidad. East of there the Southwest Chief is on the open plains, and has a handful of stops (notably La Junta, Colorado and Topeka, Kansas) before reaching Kansas City, Missouri early the next morning. After a long stop in Kansas City the train stops once more in Missouri, at La Plata, and at Fort Madison, Iowa. Crossing the Mississippi River before Noon (Central Time), the Southwest Chief stops at the Illinois rail towns of Galesburg, Princeton, and Mendota. The final leg of the trip goes through the ex-urbs and suburbs of Chicago, such as Naperville, Illinois. The train arrives at Chicago Union Station at 3:15 p.m. (Central Time), offering views of the Chicago skyline, including the famed Willis Tower (previously known as the Sears Tower) before heading underground to the station platform. The westbound Southwest Chief (train No. 3) departs from Chicago Union Station at 3:00 p.m., arriving in Los Angeles at 8:15 am around 43 hours later.

For all of the latest information and updates go to: http://www.amtrak.com/southwest-chief-train

Rails and Trails Program:
On certain days of the week, volunteer rangers with the National Park Service provide commentary for train passengers between Chicago, Illinois and La Plata, Missouri on the Southwest Chief. This interpretive program is free of charge for all passengers and is presented on the upper level of Amtrak's Sightseer Lounge Car. Volunteers tell passengers about the natural and historical features of Illinois, Iowa, and Missouri. This program typically takes place during two round-trips per week during the busy summer and winter holiday travel periods. Texas A&M University and the American Passenger Rail Heritage Foundation in La Plata, Missouri, serve as additional local sponsors. More information and a current schedule can be found at this link: http://www.nps.gov/findapark/trailsandrails/index.htm\ See also: