The train was dieselized in late 1949 and became a streamliner in August 1950. The Sunset Limited was the last among the big American luxury trains to be streamlined but in 1950 the train got a new look, with stainless steel cars with red letterboards and white "Southern Pacific" lettering. All cars except the RPO-Baggage (which had 6-wheel trucks) had 4-wheel trucks. The last car of the train was a sleeping car with a blunt rear end and a lighted neon-sign with the train name on the rear door. Until 1950 the train was pulled by 4-6-2 Pacific type and 4-8-4 GS-1 Northern type steam locomotives between New Orleans and El Paso, and by 4-8-2 MT-4 Mountain type and 4-8-4 GS-4 Northern type steam locomotives between El Paso and Los Angeles/San Francisco. Occasionally, even some 4-10-2 Southern Pacific type and 4-8-8-2 AC class Cab Forward type steam locomotives could be seen, especially on the western portion of its run. Steam occasionally appeared on the Sunset Limited until 1953.

During the decline in the 1960s more and more services on board were cut back, culminating in the elimination of the dining car, lounge car and all sleeping cars. By 1968 the once proud streamliner had three cars: a baggage car, a coach and an automat lunch counter car. The Sunset was even combined with the Golden State passenger train west of El Paso in 1964. In October 1970 the Sunset's daily service between New Orleans and Los Angeles was reduced to tri-weekly, but with full dining and sleeping car service returning over the entire route. This was the state of the train when Amtrak took control in May 1971.

SP Train No. 2, The Eastbound Sunset, ready to leave Los Angeles Union Station in March of 1971. Photo by Drew Jacksich. 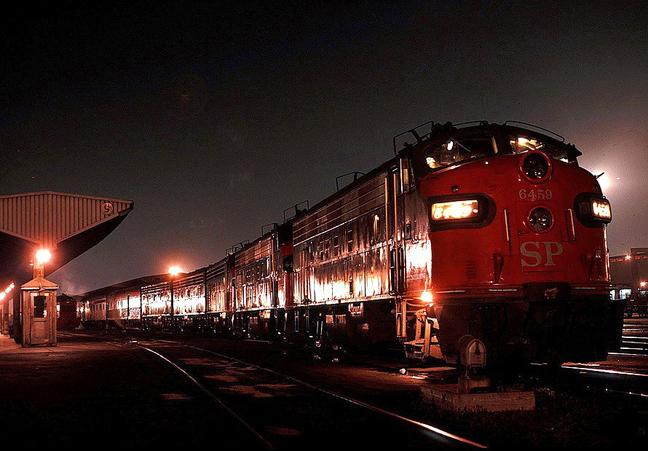 A series of publicity photos taken for the Southern Pacific at the Budd Company, Philadelphia, Pennsylvania, in June of 1950. Pictured are the Sunset Limited Diner "Audubon" and Lounge car "French Quarter".  All photos by Robert Yarnall Richie, DeGolyer Library, Southern Methodist University. 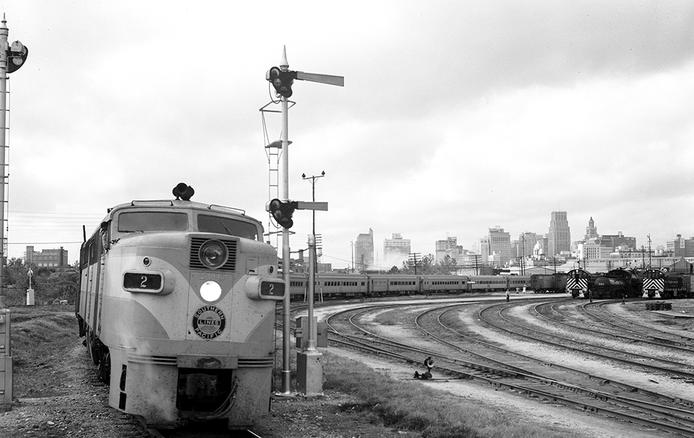 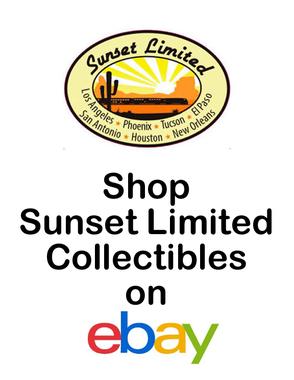 The Sunset Limited
The Southern Pacific's Sunset Limited was a passenger train that for most of its history ran between New Orleans, Louisiana, and Los Angeles, California, over the nation's second transcontinental route.

Route
West of New Orleans, the route was owned by the Southern Pacific Railroad. The name Sunset Limited traces its origins to the Galveston, Harrisburg and San Antonio Railway, which was known as the Sunset Route as early as 1874. The tracks between New Orleans and Florida included parts of the Atlantic Coast Line Railroad, the Seaboard Air Line Railroad, and the Louisville and Nashville Railroad.

The train used the following route segments, identified here by the names of their original owners:

Travel Notes
A highlight of the trip was the crossing of the Huey P. Long Bridge just west of New Orleans. The bridge is one of the longest railroad bridges in the United States, at 4.5 miles; it took the train 135 feet above the Mississippi River.

History
Before the start of Amtrak on May 1, 1971, the Sunset Limited was operated by the Southern Pacific Railroad. The Sunset Limited is the oldest named train in the United States, operating since November 1894 (though originally named the Sunset Express). The Sunset Limited was Southern Pacific's premier train. Initially the Sunset Limited was an all-Pullman train, with sleeping cars and no coaches, running from New Orleans to San Francisco via Los Angeles. From its beginning in 1894 until streamlining in 1950, all the train's cars had 6-wheel trucks and dark olive green paint with black roofs and trucks. In summer 1926 it was scheduled at 71 hours and 40 minutes from New Orleans to San Francisco; it then carried a coast-to-coast sleeper from Jacksonville to Los Angeles.