The Texas Chief
The Texas Chief was a named passenger train operated by the Atchison, Topeka and Santa Fe Railway between Chicago, Illinois, and Galveston, Texas. It operated from 1948 to 1974. It was the first Santa Fe "Chief" outside the Chicago–Los Angeles route. The Santa Fe conveyed the Texas Chief to Amtrak in 1971; Amtrak would rename it the Lone Star in 1974.

History
Santa Fe
The Santa Fe introduced the Texas Chief on April 3, 1948. The train competed with the Texas Eagle (Missouri Pacific Railroad) and the Texas Special (Missouri–Kansas–Texas Railroad/St. Louis–San Francisco Railway). The journey from Chicago to Galveston required 26 hours 15 minutes, ten hours faster the previous service on the route. Service to Dallas, Texas, began in 1955. Patronage was strong; historian Keith L. Bryant Jr. credited the Texas Chief with causing the withdrawal of the Texas Special. The Texas Chief was the first major train outside the Chicago–Los Angeles route to carry the "Chief" moniker popularized by the Chief and Super Chief.

Amtrak
Amtrak retained the Texas Chief between Chicago and Houston. In 1973 Amtrak proposed re-routing the Texas Chief to serve Dallas. This new route would use the Southern Pacific between Dallas and Houston. Opposition from the SP killed the plan. In 1974 the Santa Fe withdrew permission to use the name due to a perceived decline in service, so Amtrak renamed it the Lone Star. The general decline in passenger traffic in the 1960s led to cutbacks on the Texas Chief. Service south of Houston, Texas, ended in April 1967. The Dallas section ended on August 4, 1968. 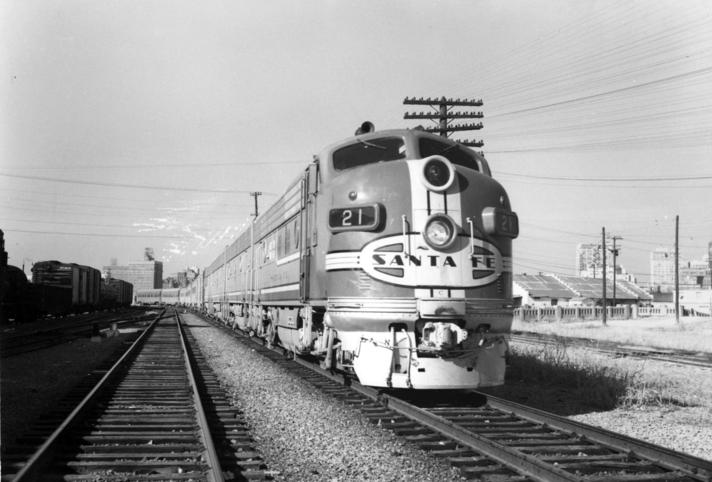 The Dallas section of the "Texas Chief" train No. 116, northbound, departing from Dallas on the afternoon of January 8, 1956.

Rolling stock
The Texas Chief debuted with new equipment, including coaches, Pullman sleeping cars, a dining car, and a lounge. In 1966 the Santa Fe assigned its 10 new GE U28CG diesel locomotives to the Texas Chief. After 1968 excess Hi-Level coaches from the El Capitan and San Francisco Chief could be found on the Texas Chief, along with Big Dome full-length dome lounges from the discontinued Chief.

The Texas Chief featured a wide variety of equipment during its short Amtrak tenure. In addition to ex-Santa Fe equipment such as Hi-Level coaches and Big Domes, Amtrak assigned Vista-Dome dormitory-buffet-lounge-observation cars from the former California Zephyr.