The Texas Special
The Texas Special was a named passenger train operated jointly by the Missouri-Kansas-Texas Railroad (also known as the MKT or the Katy) and the St. Louis-San Francisco Railway (the Frisco). It was the flagship of both these lines, operating between St. Louis, Missouri, and San Antonio, Texas, from 1915 until 1959, after which time the Katy changed the northern destination from St Louis to Kansas City after the Frisco discontinued service from St. Louis.

In 1915 the Katy began operating the Texas Special from St. Louis to San Antonio via North Jefferson City, Missouri; Parsons, Kansas; McAlester, Oklahoma; Dallas, Fort Worth, and Austin, Texas. This was done to augment the existing Katy Flyer and Katy Limited trains.  Effective March 4, 1917, the Texas Special operated over Frisco line from St. Louis through Springfield, Missouri, to Vinita, Oklahoma, where it met Katy lines. When the Texas Special changed lines in Vinita, it changed crews as well. In the early days of joint operations, down the Katy line in Muskogee, Oklahoma, the locomotive was changed also.

The joint operation created one of the shortest routes connecting Texas financial centers with those in the East. In light of this success the two railroads inaugurated a second train, named the Bluebonnet on December 11, 1927; it operated until May 1, 1948, serving the same route. Throughout the 1940s the Texas Special consisted of "heavyweight" passenger cars pulled by Katy Pacific 4-6-2s, Frisco Northern 4-8-4s, or Frisco Mountain 4-8-2s.

Special envelope commemorating the inaugural run of the Texas Special, May 16, 1948.

Streamlined Diesels
In 1947 the Texas Special was upgraded to a diesel powered streamliner. Katy and Frisco outfitted two complete 14 car trains with EMD E7 locomotives and Pullman rolling stock. Each train had seven sleepers, three coaches, a coach-buffet-lounge car, a diner, a combination RPO-baggage car, and an observation car (sleeper-lounge-observation car or buffet-lounge-observation car). In the early years of the streamlined Texas Special all these cars were bright red with shining corrugated aluminum side panels. The locomotives were painted to match.  With two sets of equipment, the train could run daily from both St. Louis and San Antonio, departing one city in the afternoon and arriving in the other the following afternoon. Katy took the diesels off the train in Waco for servicing and again used a Pacific class 4-6-2 steam locomotive, usually their Pacific 383, to take the train into San Antonio. 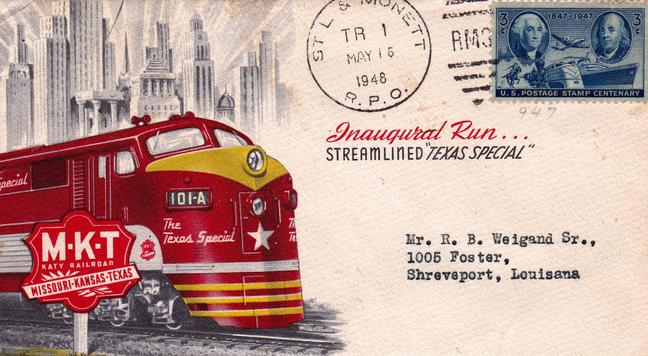 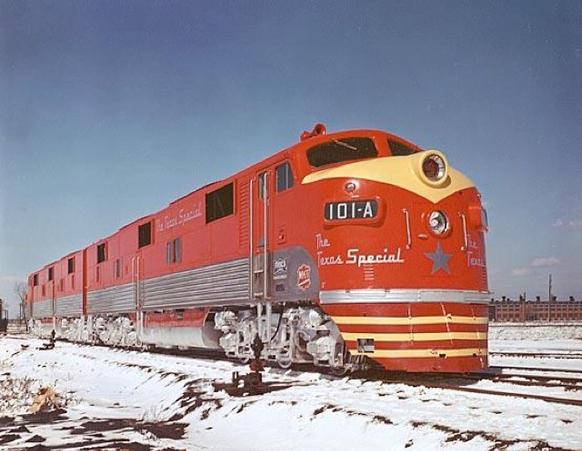 The Texas Special proved to be so popular that the two railroads soon had to purchase additional equipment. Two ALCO PA-1 diesels were purchased by MKT in 1949. In some cases, older rail cars were repainted to match the distinctive Texas Special look. Soon it was not unusual for the Texas Special to run with 20 cars instead of the original 14. According to a historical pamphlet published by the MKT railroad in 1970, by 1950 the Texas Special was regarded as one of the most profitable streamliners in America. At the height of its popularity the Texas Special also offered through passenger service to New York City with through 14-4 sleeping cars, via the Pennsylvania Railroad (PRR).

In the mid-1950s the Katy was taken over by a conglomerate whose focus was freight train profits; they showed little interest in properly maintaining the track and equipment to operate a comfortable passenger streamliner. Trains would run late and passengers soon were finding alternative transportation. By 1959 conditions had deteriorated so much on the Katy lines that Frisco pulled out of the venture. This meant Katy had to move the northern terminus of the Texas Special from St. Louis to Kansas City, Missouri. In 1964 Texas Special service was discontinued south of Dallas, Texas. The last Texas Special ran on July 1, 1965.

Frisco purchased the E7 locomotives and Pullman cars for the Texas Special at the same time as they purchased ones for the Meteor, so the two trains shared the distinctive red and silver look. Frisco bought sets of named cars for each train.

Named cars
Named trains frequently had named Texas Special cars after famous individuals or cities. Not all cars were named, but the ones that were bore their names prominently on their side panels.