The Texas Zephyr
The Texas Zephyr was a named passenger train operated by the Colorado and Southern Railway and the Fort Worth and Denver Railway (both subsidiaries of the Chicago, Burlington and Quincy Railroad). The train was designated number 1 southbound, and number 2 northbound.

Inaugurated on August 22, 1940, the streamlined train ran from Denver, Colorado to Fort Worth and Dallas, Texas, replacing the heavyweight Colorado Special. At Dallas, the Texas Zephyr connected with the Sam Houston Zephyr and Texas Rocket, both operating on the jointly owned Burlington-Rock Island Railroad for through service to Houston.

Initially, the train was equipped with Budd-built streamlined stainless steel chair cars and an observation dining-lounge car. Sleeping cars were, however, rebuilt streamlined heavyweight cars. The train was pulled between Denver and Fort Worth by pairs of General Motors Electro-Motive Division stainless steel E5 diesels. To allow adequate time for servicing the diesel locomotives in Fort Worth, a FW&D 550 class 4-6-2 "Pacific" type steam locomotive shuttled the train between Fort Worth and Dallas. It was later replaced by sister E5 diesel locomotives purchased by C&S from parent CB&Q.

Postcard depiction of the Texas Zephyr. 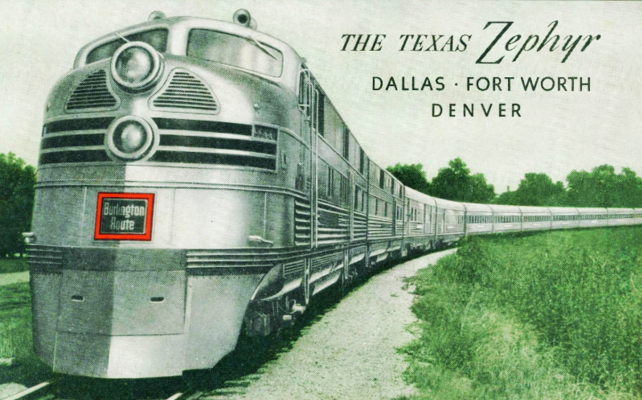 In 1957, the re-equipping of the 1936 Denver Zephyr made those trainsets available, and they were assigned to the Texas Zephyr. Though older than the original Texas Zephyr equipment, they offered more luxurious amenities. These consists ran on the Texas Zephyr until February 1965, when they were retired and the original equipment restored to the train, albeit with Pullman pool streamlined cars or sleeping cars from the parent CB&Q.

As a result of it losing its U.S. Mail contract, the Fort Worth & Denver abandoned all passenger service in 1967, the Texas Zephyr making its last run on September 11 of that year.