History
Following World War II new Monon president John W. Barriger III embarked on a program to renew the Monon's passenger service, long neglected. The centerpiece of this program was a group of 28 surplus hospital cars originally built by the American Car and Foundry Company (ACF) in 1944–1945 for the U.S. Army. The Monon rebuilt these cars in their shops, creating enough lightweight coaches, parlor-observation cars, dining cars and mail/baggage cars to create three new streamliners: the Chicago-Indianapolis Hoosier and Tippecanoe, and the Chicago-Louisville Thoroughbred.

The Monon Railroad's "Thoroughbred" streamlined passenger train, which traveled from Chicago to Louisville. 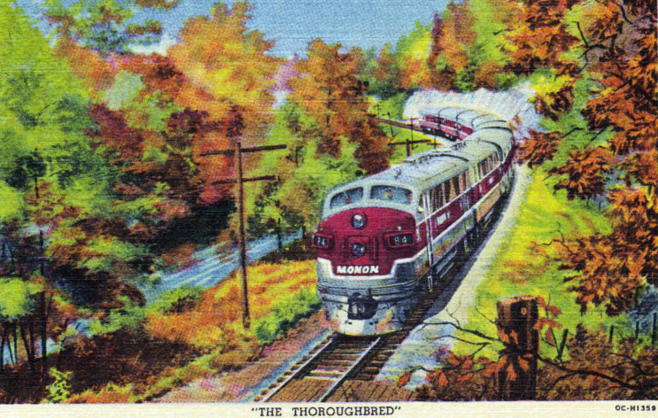 The Thoroughbred made its first run on February 15, 1948, replacing the Day Express. Monon discontinued the Thoroughbred on September 30, 1967. It was the final passenger service on the Monon, although Amtrak's Hoosier State continues to use part of Monon's route between Indianapolis and Chicago.

Route
The route length was 324 miles; the train operated as No. 5 (southbound) and No. 6 (northbound) and used Dearborn Station in Chicago.